BEVERLY, Mass.– During a meeting held on Friday, October 23, the Endicott College Board of Trustees officially welcomed the new alumni council president and two members who were appointed last spring. New officers were also announced.

“I am thrilled to welcome our new members and officers to Endicott’s Board of Trustees,” said DiSalvo. “The in-depth business knowledge, tangible experience, and commitment to the College that this group brings will be invaluable as we continue to plan for and shape Endicott’s future. Outgoing Chair Cindy Merkle represents all of these traits, and I thank her for her service to the Board, and for being a dedicated alumna.”

Susan Dowling ’72 is Vice President, Wealth Management Advisor at UBS Financial Services Inc., since 1983. She currently serves as Chair, Board of Directors for CorePlus Federal Credit Union and served on the Connecticut Community Credit Union Board since 1986, before the merger with CorePlus. During this tenure, she partnered with the Mashantucket Pequot Tribal Nation in 1997 to open a branch at the Grand Cedar Hotel at Foxwoods for employees and Tribal Members. She is also a current member of the Williams School Finance Committee, which she joined in 2019.

Dowling was appointed to the Endicott Alumni Council in 2013, and started her post as President in the summer of 2020. She has also been an Endicott Advisory Board Member since 2014. From 1992–2017 Dowling was a Finance Committee Member of the United Way of Southeastern Connecticut and Chair of the Investment Committee.

Born in Boston and now residing in Noank, Conn., with her husband, Matt; daughter, Haley; and dog, Axl; Dowling and her family provide foster care for children in the community who are in need of a loving home. 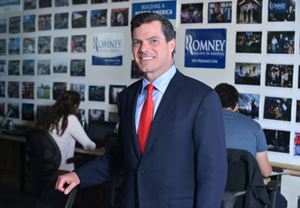 Peter G. Flaherty II is Cofounder and Principal of Esplanade Strategies, a public affairs and political strategy consulting firm based out of Belmont, Mass. He has advised on policy, strategy, and debate preparation for campaigns on the state, federal and national level, including races for Governor, United States Congress, United States Senate, and President of the United States.

Flaherty is an Executive Fellow at the Harvard Business School, a Distinguished Visiting Lecturer in the political science department at The College of The Holy Cross, and former Senior Fellow at the New Hampshire Institute of Politics. He has lectured on politics at The John F. Kennedy School of Government at Harvard University, the Fletcher School of Law and Diplomacy at Tufts University, The New Hampshire Institute of Politics at St. Anselm College, and Stonehill College.

Prior to the presidential campaigns, Flaherty served in the administration of Governor Mitt Romney and Lt. Governor Kerry Healey. A former Assistant District Attorney in the Suffolk County District Attorney’s Office in Boston, he investigated and prosecuted hundreds of criminal cases. Flaherty is a senior advisor to a national victims' rights organization, serves on the Board of the Suffolk County Children’s Advocacy Center in Boston, and on the Advisory Board of the Middlesex County Children’s Advocacy Center. He is a Trustee on the Board of New England School of Law Boston.

He is a graduate of the College of the Holy Cross with a bachelor’s degree in economics and received a Juris Doctorate from New England School of Law Boston.

Jonathan M. Payson graduated from Yale in 1979, and worked for eight years at a private investment firm in New York City. He joined Wellington Management Company, LLP in 1987 to manage Wellington Trust Company, NA, the firm’s national trust banking subsidiary, and retired as its President and Chairman in 2009. In 1995, Payson was elected to Partner at Wellington Management, adding global relationship management and corporate operations oversight duties.

Since retirement, Payson has served on a variety of organizations in the nonprofit sector. He is a current Board Member and Treasurer at RootNS, a youth-training social enterprise in Salem, Mass.; and a Trustee for both Endicott and Northeast Hospital Corporation in Beverly, Mass. Payson is the former Chair of the Board of the Essex County Community Foundation; a former Board Member and Treasurer of Brookwood School; and a Past President and Trustee of the St. Thomas More Catholic Center at Yale University, New Haven, Conn. In addition, Payson serves in volunteer and advisory roles for several other nonprofit organizations.

A former Marine Corps Reserve Officer and Gulf War veteran, Payson is a volunteer pilot for the Veterans Airlift Command and a member of Business Executives for National Security (BENS). He lives in Manchester-by-the-Sea, Mass., with his wife and two daughters.