Molly Andrade ’21 is an unassuming woman, but she is by no means a wallflower. She walks into a room with a wide smile and will meet your eyes easily while reaching out to shake your hand. She is strong, deliberate, and cordial. Every bit the royal that the world deserves.

For those who don’t know her, Andrade is a current Endicott College junior who is majoring in business management and political science while actively campaigning to be the next Miss America.

Andrade’s Miss Rhode Island program is centered around self-defense for women. Through her platform, “SARA” (Sexual Assault Resistance and Awareness) Andrade teaches women and girls of all ages to be aware of their surroundings, to combat assault, and to advocate for themselves. She partners actively with high schools and colleges to implement and enhance programs they already have and/or advises them on ones that they want to start. One day, she hopes to expand the program nationally. 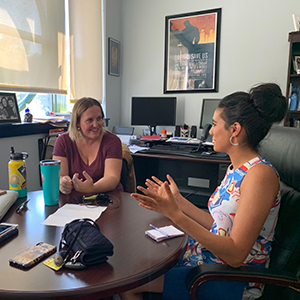 She says, “We are working to hopefully make SARA a nonprofit and get trademarked. It is more than a basic self-defense program. It teaches female empowerment. I think everyone wants to change the world, but if I could just change this one part of it, that would make me so happy.”

Andrade is passionate about women’s self-defense for many reasons. The concept of SARA did not just come to her overnight. Instead, it was crafted carefully during her personal journey toward her destiny.

The first seed was planted early when a candidate came to her middle school and spoke about needing a platform you believed in to run a successful campaign. Then in her freshman year at Middletown High School, she took a self-defense class that she found very empowering. Finally, Andrade had her eyes opened fully when a close friend of hers was sexually assaulted. From then on, she began working tirelessly in pursuit of a world where women are prepared and empowered to defend themselves.

In a practical sense, SARA arms women with tools they need to succeed, but Andrade says it is much more than those alone.

She says, “The program helps women understand the reality. I think that I was somewhat naïve in high school. I thought, ‘that’s never going to happen’ or ‘that would never be me,’ but when the statistics become real it changes your perspective. There are always new experiences and women need to be prepared combat them. The goal is not to scare them, but to prepare them.

“We show videos about kidnapping and assault. We want to show them how fast it can happen. We also simulate scenarios. Sometimes we work with different sports teams, which is a fun way to cover a serious subject matter. We teach the different techniques, but it’s not that you take this class and nothing happens to you.

“You have to practice advocating for yourself in life, in the workplace and in the classroom. Women need to know that they’re enough and that they make a difference.

“I think the most important piece is about recognizing and fueling the passion you already have inside you and letting it shine. Once you can harness that, there’s nothing you can’t accomplish. The program teaches self-defense, but it’s the empowerment that is going to help you be future leaders and changemakers and I think now our society is ready for that.”

At Endicott, Andrade feels confident that all students can speak up and be those changemakers.

She says, “I want to be at a campus that says ‘this happened and here’s what we are going to do about it.’ Transparency is what every school needs to be working on. By not fostering it, you are allowing hurt to thrive, and that’s just not acceptable. Certain abusers have thrived in institutions for years, like in Olympic gymnastics and those people need to know that no one is untouchable anymore.

“At Endicott if you don’t agree with something, then speak up and let your voice be heard. Every single time I walk on campus, I feel valued and I feel like I matter. I feel like I have the power to make a difference. They allow every student to flourish in their own capacity and I think that is something that makes us very unique.” 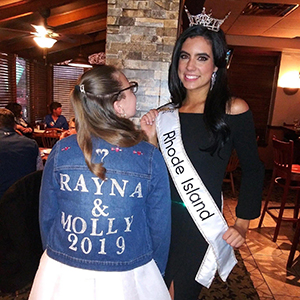 Though her platform was originally focused on high schools, it now includes colleges and the education of younger girls. She says, “I speak with people of all ages and gear what I’m talking about to the audience. Eye contact, stranger danger, self-advocacy, and how if they see something, how they can confide in others. While some examples and topics aren’t appropriate for certain ages, I do speak to them all.”

In fact, one of Andrade’s most powerful cheerleaders is on the younger side. She was her mentee for the Princess Program, which is a program for girls ages 5–12. In fact, that same mentee has been by her side for three consecutive competitions and Andrade credits her directly with helping her win Miss Rhode Island 2019.

She says, “Originally, I was going to compete for two years and then focus on school, but Rayna would not compete with anyone else and so I said, ‘third times the charm’ and it was! She ran up and hugged me saying ‘where’s Miss America? We’re going together!’ She was the one I was supposed to be mentoring, but she mentored me too and helped my dream become a reality.”

At first blush, one would assume a Miss America candidate would not preach the benefits of failing, but Andrade incorporates it into her platform. The first year she competed, she didn’t expect to rank high. She told next to no one that she was competing; her sister was abroad and her mother was out of the country. Her father played the pageant parent that year and they were both equal parts overjoyed and surprised to hear her name called as first runner up. Though she didn’t win that year, she felt it was somehow meant to be, so she just kept going.

She says, “Failure is inevitable and I speak to others about embracing it. I’ve learned to enjoy failure. Sometimes it’s hard when we want something so badly and can’t get it, but that’s when it’s time to work harder.”

No one is an island, especially Miss Rhode Island. Though she does much of the work herself, Andrade is supported by a team of professionals and friends. 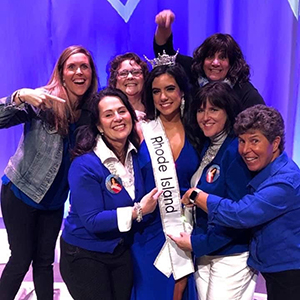 She says, “We have a board of people for Miss Rhode Island that includes a prep team to get you ready for Miss America and aligns closely with family members and different people within the community so that you can be as prepared as possible.

Then there is also a team at home in support of me and getting SARA going. They help with implementing the curriculum, conducting trial sessions, getting input from survivors so as to make sure it is the right fit. There are different people in the community that are helping to take the message statewide and then, someday will hopefully help take it nationally. It definitely takes a village.”

Beyond the professional, volunteer and family teams, Andrade draws strength from her on-campus friends and her professors. She realized how important those people were within just a few days of being crowned.

She says, “They don’t give you a handbook on how to be Miss Rhode Island and when I won, I hadn’t really eaten or slept for a few days. Endicott and my friends have been really helped. They realize when I need a break and encourage me to go take a walk on the beach…to take time for myself. Some people have asked me why I didn’t take a year off, but it’s been really nice to be at Endicott during the process. They are working with me and sometimes I can just be Molly, which is nice because I can give 100 percent to the competition and Endicott.”

In a day-to-day sense, Andrade appreciates Endicott’s flexibility because the Miss Rhode Island campaign and if she succeeds, her reign as Miss America – is a full-time job.

She says, “It is quite literally a 24/7 job. I’m either doing social media and conference calls or I’m at an event, fitting in my studies. I thought I was good at planning before, but now I’m basically a master of scheduling.”

When she won her crown, she assumed that the Miss America competition was going to be in September, as it traditionally has been, however, this year it was announced for December. Andrade felt that the announcement was good news as it would give her more time to prepare, but it did present a distinct need for re-strategizing her college life. In response to the December timeline, Andrade worked with Endicott and is now conducting her semester internship and taking classes online.

She says, “Endicott has been very supportive. I truly appreciate the College working with me to develop a class schedule that allows me to continue my education and be able to fulfill my duties as Miss Rhode Island.” 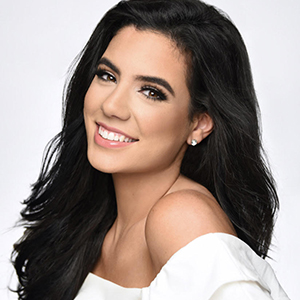 At the moment, Andrade is laser-focused on the upcoming competition, her SARA program, and her studies, but someday, she hopes to be the governor of Rhode Island.

She says, “I want to run for governor. When I was in fourth grade I did an assignment about the governor and my one wish for Christmas was to meet him and my parents made that happen. I now look back on how hard that must’ve been for him to fit into his schedule and I really appreciate it.”

We asked Andrade what advice she could offer others who want to follow a path like hers.

She says, “Find out what you are passionate about. Don’t just start something to start something. You have to find something that keeps you up at night. Once you find that, go places that already have a program in place and then work to enhance it. Collaborate with different people and ask for advice. People are so willing to help, especially when it’s a passion project. Finally, take in and celebrate the little victories when you hear that you are making a difference.”

We are so proud of our Gull! If you would like to watch her compete in the Miss America pageant, tune into NBC on Thursday, December 19 at 8 p.m.