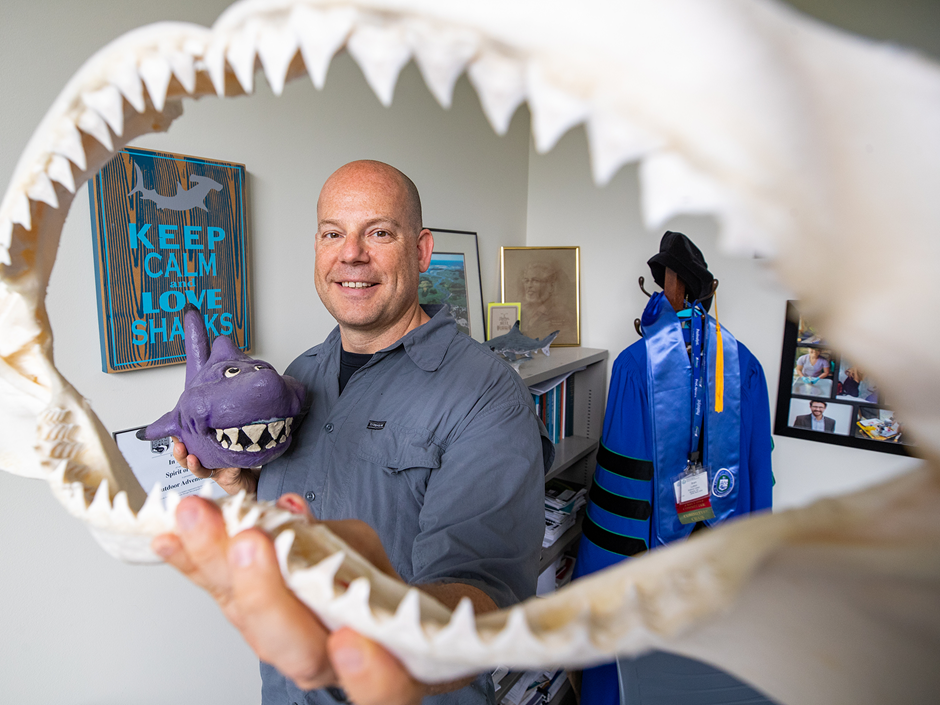 You’ve seen the videos and photos of sharks lurking off Cape Cod. But, did you know these fascinating facts, via Endicott College expert Dr. Bram Lutton?

It’s that time of year again—Shark Week! Although, for Massachusetts residents, it feels more like Shark Summer with the amount of great whites lurking off Cape Cod and beyond.

With sharks seemingly on the mind of everyone these days, we turned to Endicott College Associate Professor of Biotechnology, Dr. Bram Lutton, for some insight on the feared, yet awe-inspiring predators.

Lutton’s interests are a little different from the “shark cowboys” on the Discovery channel, although he has experience tagging and monitoring for the Mote Marine Lab in the Gulf of Mexico. His expertise is more geared toward shark, stingray, and skate physiology, like how their reproductive systems relate to their immune systems.

So, without further ado, here’s a look at the top four things people never knew about sharks—and their close vertebrate friends, stingrays and skates—via Lutton (BL).

1. They are old. REALLY old. 450 million years.
BL: To put that into perspective, that’s twice as long ago as when dinosaurs roamed the planet. The dinosaurs became extinct about 200 million years ago because an asteroid hit Earth, and most of the animals that survived were protected by living in the oceans. These species have had twice as long to adapt and form fascinating characteristics.

2. JAWS! No, not the movie—the fact that sharks were the first animals with actual jaws.
BL: We believe that when the jaws evolved for the first time in these animals, that made them able to eat what they’d never been able to eat before and live in places they’d never been able to live before. The amount of time they had to adapt allowed them to explore and survive in new habitats, from the deepest, darkest depths to the planet’s beautiful reefs.

3. When it comes to reproduction, sharks are unlike any other animals.
BL: Sharks live in so many different habitats and have so many lifestyles that evolution has created in them, depending on which species, strategies ranging all the way from egg laying (ovipary) to live birth (vivipary), in which the babies are born ready to survive on their own. So this wonderful theory (evolution) that 450 million years of time and “survival of the fittest” has created every type of reproduction from making eggs to making miniature versions of sharks ready to use their JAWS—that doesn’t exist in any other species.

4. Pathogens? Meh. There’s an immune system for that.
BL: When sharks began chomping on new food sources with their brand-new jaws, they got more than just food; they also consumed new pathogens (such as viruses, bacteria, and parasites). We believe that led to an explosion in the immune system, over the course of thousands of years, called adaptive immunity. That includes much more complex molecules, like antibodies, that never existed before the sharks and their relatives. So for 20 years I’ve been studying how different physiological systems (reproductive, immune, etc.) interact to make these animals so unique.

Interested in learning more about sharks and what makes them one of the most evolutionary unique animals on the planet? Take a look at our STEM options through the School of Arts & Sciences.