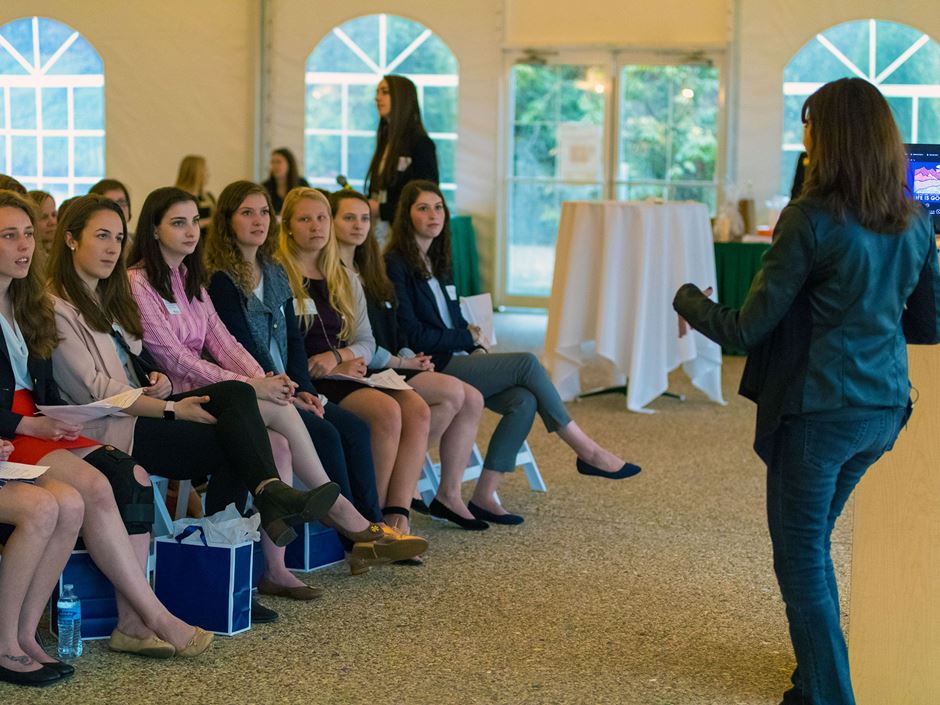 Alumnae leaders from ESPN and Hubspot are among featured speakers at the Changemakers Conference.

Endicott College alumnae in leadership roles at ESPN and Hubspot will be joined by other female leaders from Manulife and Into the Lightin presenting at the College’s fourth annual Changemakers Conference. The annual event, created by Endicott’s Women in LEADership club, aims to inspire a new generation of professionals to lead with confidence.

This year’s keynote speaker will be Sophia Mazzini, president and founder of Into the Light, an organization dedicated to erasing the stigma that can be associated with mental health issues facing teens and young adults. Additional featured speakers include Leigh Fitzgerald Brown ’10, principal manager of Hubspot’s customer growth team; Jenny Lyons, director of technology communications at Manulife; Lindsay Troncone ’06, coordinating studio operator at ESPN; and Rachel Valdes ’06, highlights manager at ESPN.

Endicott student Katie Peter, an organizing member of Women in LEADership, says that the event’s speakers “are women who have successfully climbed up in their careers and overcome challenges,” and that those attending will surely “leave with new perspective and inspiration.”

What you need to know if you’d like to attend.

Mazzini is a passion-filled individual, driven by the kindness and strength she sees in others. After losing her father to suicide her senior year of high school, Mazzini and her sister, Artemis, organized a walk/run at Rutgers University to raise awareness for mental health. Over 1,500 participants attended the event and more than $85,000 was raised for the American Foundation for Suicide Prevention.

Recognizing the need for a sense of community and a positive environment that gives people the confidence needed to reach out for help, Mazzini co-founded Into the Light, a 501(c)3 non-profit organization to continue raising awareness and funds to rid the stigma surrounding mental health for teens and young adults.

Brown is a principal sales manager at HubSpot, a cloud-based marketing and sales software company based in Cambridge. Brown directly manages a team of eleven sales reps, focused on selling into an install base of customers. After graduating from Endicott in 2010 with a communication degree, she unknowingly started her career in sales as a tour consultant working with high school teachers to plan their student tours abroad. After discovering a real passion for consultative sales, she joined HubSpot as employee 531 in 2012. When she is not sitting in traffic on Route 1, or coaching her sales reps, she can be found traveling with her husband Steve, or walking her adorable bernedoodle, Maisy.

After graduating from Endicott’s School of Communication in May 2006, Valdes left her home state of Massachusetts to work at ESPN as a media operator in their production operations department. From there, she honed her skills in multiple roles which included working in the control rooms for high profile shows such as SportsCenter, operating in the trucks for Sunday Night Baseball, and providing telestration breakdown tapes for analysts and highlights across multiple platforms. After four years as an operator, Valdes made the non-traditional move to highlight producer, where she worked directly with SportsCenter show producers and PAs creating highlights and content for the shows on a nightly basis. She now oversees that group as a manager, ensuring that the daily operation runs smoothly, focusing on growth and development of the staff and long-term planning for the group as a whole. Valdes currently resides in Avon, Conn., with her husband, Erick, and their black lab Tallee.

After graduating from Endicott in 2006, Troncone began her career in television. She worked briefly for The Late Show with David Letterman as an audience page and music assistant. After a year of commuting to New York City, she got a job in her home state of Connecticut as a studio operator at ESPN in 2007. Now a Coordinating Studio Operator, Troncone operates hard camera, jib camera, lighting, and video shading for studio shows, provides leadership and training for her team, and assists the schedule coordination of studio operations. She has operated jib on the road for Baseball Tonight, SportsCenter, and Sports Nation all over the country, including the 2011 World Series in Arlington and 2012 BCS Championship in New Orleans. She lives in Shelton, Conn., with her husband, Andrew, her 4-year-old son, Roc, and golden retriever, Kaia.

As the Director of Communications, supporting the Enterprise Technology & Services (ETS) Team at Manulife, Lyons is responsible for developing and executing on communications strategies that promote engagement across the team and understanding across the company. ETS has an ambitious strategy and Lyons’ role focuses a lot on bringing that to life.

Before joining Manulife in March 2018, Lyons supported communications for the Technology & Operations Team at the Royal Bank of Canada (RBC). In this role, she put her visual storytelling abilities to work and drove understanding of the team’s strategy using various media, including videos, infographics and presentations. In 2017, Lyons led the execution of the winning nomination for the Information Technology Association’s (ITAC) Canadian CIO of the Year, a prestigious honor for RBC’s chief information officer. Her career journey has also included communications roles at TELUS and Scotiabank. Lyons is married with two young children and lives in Toronto.