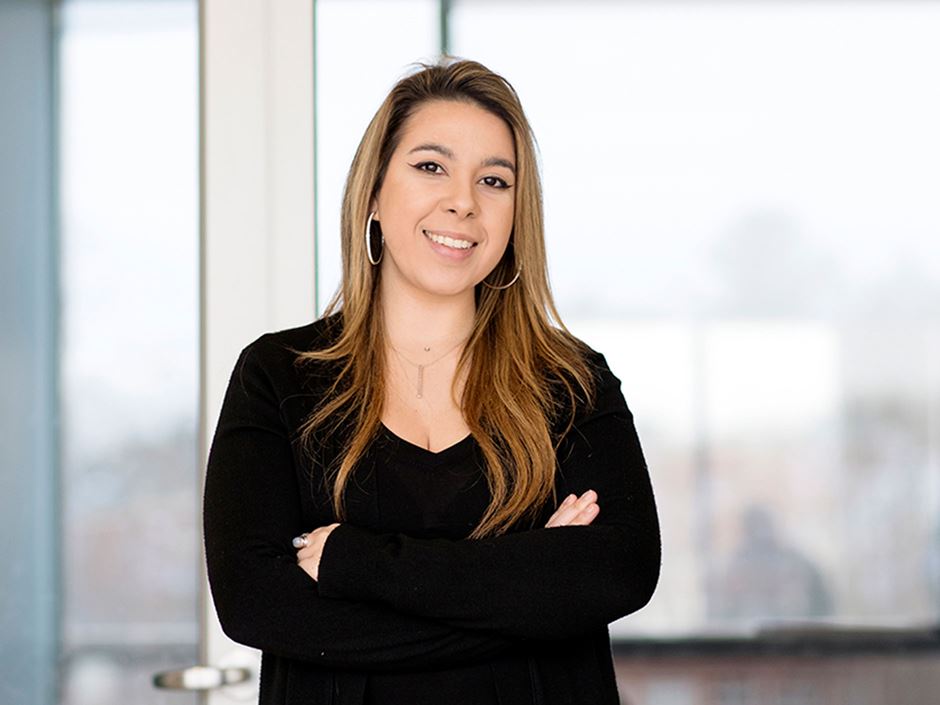 Vincenza DiMaio ’16 M’18 shares her story of success in the homeland security space and how Endicott helped her get there.

Vincenza DiMaio ’16 M’18 always knew she was meant for law enforcement. “Ever since I was 11 years old, I wanted to obtain a career in law enforcement, now at the age of 25, I feel I accomplished that goal,” she says.

DiMaio has completed a five-month reserve police academy, and became a certified municipal police officer, which gave her the skills and tactics needed to perform in her previous role as a security officer at Salem Hospital.

She explains when she began to shift her interests from local law enforcement to homeland security specifically, “When terrorism, mass shootings, and trafficking became more frequent on the news and social media, I caught myself developing an interest. It's disheartening to see your own country suffer from these events, and that's when I started thinking about branching out from local law enforcement and pursuing a career in homeland security.”

DiMaio holds a bachelor’s degree in criminal justice from Endicott College and a master’s degree in homeland security from the Van Loan School at Endicott College. The Gloucester, Mass., native currently works for the Department of Homeland Security's Federal Emergency Management Agency (FEMA) as a program delivery manager.

She says of her role, “I'm comfortable working in a male-dominated industry.” Her job was presented to her before she graduated from the homeland security program by Assistant Director of Homeland Security Studies, Engrid Backstrom, who encouraged her to interview.

"What I liked the most about the program was that I wasn't treated like a number. The professors and advisors focused on my progression every semester and helped me succeed."

DiMaio is glad she did because she landed the job on the same day as her interview. She now works closely with communities that have been affected by a declared disaster. Her first deployment was in New Hampshire, where she managed six different communities and a total of 13 projects. Currently in her second deployment, DiMaio manages six different communities and a total of 18 projects. She says, “I genuinely enjoy my job. I've had the pleasure of working with so many amazing communities on both of my deployments and I’m constantly learning.”

DiMaio says, “What I liked the most about the program was that I wasn't treated like a number. The professors and advisors focused on my progression every semester and helped me succeed.” She shares that Director, Paul Joyce, and Assistant Director, Backstrom, wanted the best for their students and always pushed them to excel by making themselves available for guidance, mock interviews, and even insight into future career paths.

“I was impressed with all my professors,” she says. “They all held a profession in the homeland security and law enforcement field. We weren't just taught about homeland security, we conversed with true professionals about the field and were prepared to embark on our journeys with the right guidance.”

It was that motivation and support that led DiMaio to coauthor a book on human trafficking where she was able to apply her knowledge in this area. The book grew from a project completed during her coursework into a side project which she’s still working on and hopes to publish soon.

Learn more from DiMaio about her current role, her time in the homeland security studies program, and her experience as a woman working in a male-dominated industry.

How do you feel, now that you’ve graduated, about working in a primarily male-dominated industry?
…As a kid I never realized the odds would be stacked against me because I am a female. I learned quickly I had to prove myself to the men I interviewed against and the men I worked with that I belonged there. I've been fortunate enough to work alongside many males who supported me and believed in my ability to be a valuable member of the team. I speak to women frequently about my job position and when they tell me they are intimidated to work in a male-dominated industry, I tell them that it's a big adjustment but you earn the respect once you earn your place.

What opportunities for women specifically are there in this industry?
There are countless opportunities for women in this industry. I wouldn't say there are specific professions that target only women in this industry because I believe that both men and women are capable of holding the same skill sets and delivering them differently. For instance, I was the only female security officer at Salem Hospital, and I was an asset when working with combative children and females. Sometimes women and children feel more comfortable speaking to a female authoritative figure.

What types of skill sets are “must haves” of anyone who works in the homeland security space?
Skill set "must haves" would have to be confidence, professionalism, integrity, a good work ethic, and respect. You can have all the training and knowledge in the world, but if you cannot present yourself in a professional manner or prove you are a great employee it'll be difficult to stand out from your coworkers. I have built a great relationship with my task force leader, state representatives, and all 12 communities I've been assigned to. It's because of those “must haves” that I have my current position with FEMA.

What’s your end game? Where are you headed?
My end game is to combat human trafficking. I've developed so much knowledge on the epidemic and nothing would fulfill me more than recovering victims and bringing offenders to justice. I am constantly networking with agencies like Immigration and Custom Enforcement, Homeland Security Investigations, and Federal Bureau of Investigations looking for any opportunity to reach my end game.

Do you feel that your experience at Endicott in both programs helped prepare you for your role today?
I feel both programs helped me prepare for my role today. I always doubted myself, I never really gave myself the credit I deserved... I cannot express enough the importance of networking. Being able to present yourself to a stranger and engage in a conversation that can lead to a job opportunity is the best skill you can develop.

What would you tell another woman considering the homeland security program at Endicott?
I would tell them to engage in all opportunities the program has to offer. A few months ago, I spoke at a woman's panel at Endicott for women in homeland security, and I was able to network with real female professionals in the field. The program is constantly updating students, both male and female, about upcoming job opportunities and how to prepare for an interview, and how to stand out.