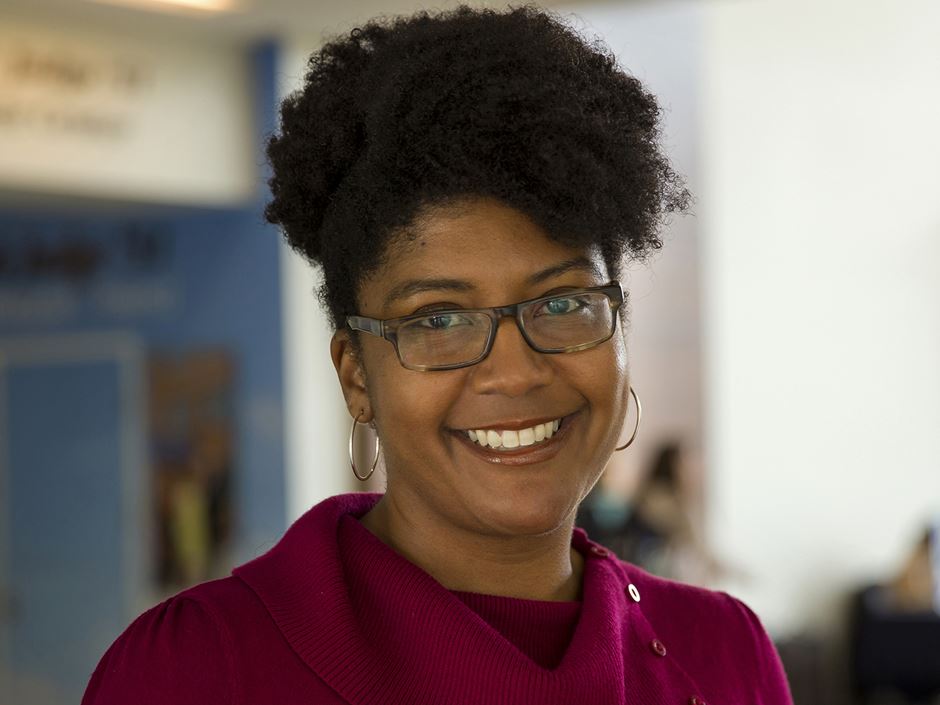 Associate Provost of the Van Loan School at Endicott College, Dr. Chrystal Porter, is a female leader who is making a big impact on the College.

March is Women's History Month—commemorating and encouraging the study, observance, and celebration of the vital role of women in American history—or for this spotlight series, at Endicott College.


Throughout the month, we’ll be introducing you to female leaders who are making a big impact on the College’s community. Today, we’re kicking it off with Dr. Chrystal Porter, associate provost of the Van Loan School at Endicott College—a role she stepped into this winter.


Porter, whose name is followed by not one—but five—educational acronyms (Ph.D., Ed.S., M.S.A., B.S., and B.S.) due to earning five college degrees, is part of a very small percentage of administration at Endicott who started as a faculty member and worked her way up the ranks.


As associate provost, Porter is responsible for overseeing the deans and directors in charge of the academic offerings at Van Loan and ensuring that programs meet the needs of our current and prospective students. Though this is surely a full-time leadership role, she somehow finds time to be a member of eight boards/committees on campus, as well as be involved with seven organizations outside of Endicott.


Other fun facts about Porter that prove her ambition at a young age.


Here’s more about Porter and what she has to say about being a female leader at Endicott.


Tell me a little bit about yourself/your leadership role here at Endicott.

I consider myself a lifelong learner having earned five college degrees—two bachelor’s, one master’s, one Specialist in Education, and one Ph.D—and I’m on a mission to help people make intentional decisions about their learning, teaching, and decision making. I am highly motivated to help students align their educational and professional goals, as well as work closely with faculty and administrators in creating systems and experiences that produce successful learning environments. With Endicott, I have served in the role of faculty, chair, assistant dean, associate dean, associate vice president, and my current role as associate provost.


What is your role as the as associate provost of Van Loan?

In my current role as associate provost, I am responsible for overseeing the deans and directors in charge of the academic offerings within Van Loan. This includes programs ranging from associate to doctoral degrees.


What does this new role mean to you?

My original career aspiration was to work in professional sports. In high school, I was a ball girl for the Denver Nuggets. My first year in college, I was promoted to an intern within the organization, and continued to work throughout college with the Denver Nuggets and Colorado Avalanche as a sales associate. After completing my master degree in Sport Administration, I pursued my ultimate career goal of obtaining a position with the NBA League Office, of which I was offered a position that I decided to turn down so I could become a sport management instructor and teach others how to successfully pursue their careers in sport just as I had done. Overtime, my interest in helping students expanded beyond those students within my own discipline, so I opted to pursue opportunities in higher education that would allow me to work with a wide variety of students, including working as an academic advisor, admission counselor, retention specialist, and later teach in the disciplines of communication and educational administration.

My current position is exactly what I envisioned for myself. On a daily, if not hourly basis, I get to imagine what is going to be important for colleges and students in the near future, and work with Van Loan deans, directors, and staff and try to put together academic programs and experiences that will best situate and prepare our students. On the college level, I try to make sure that the interest of Van Loan and our students are included in discussions and decision making. At the school level, I try to participate in decision making that ultimately create systems, processes, and procedures that allow Van Loan students and staff the ability to accomplish their goals successfully.


How are you able to lead? What skills are needed?

I am a firm believer that being a good leader is something that must be intentionally pursued. It does not happen by chance or accident. Just having a title doesn't make you a leader--you have to successfully demonstrate on a consistent basis why you should hold the title. I describe myself as a servant leader, so I specifically try to listen and help people accomplish the goals or task that they are communicating. In other words, my vision is to always help others achieve their vision.


What does it mean to you to be a female leader at Endicott?

One thing that was never lost on me since I have worked at Endicott was the number of women that work in leadership positions within the institution. I appreciated how former president, Dr. Richard E. Wylie, surrounded himself by very knowledgeable women in significant leadership positions. But more importantly, Endicott has always had women in powerful positions, including the first president of Endicott, Eleanor Tupper, and currently Dr. Laura Rossi-Le, the vice president and dean of the undergraduate college, Dr. Katie Barnes, our interim president, and even Cindy Merkle, the trustee chair. Thankfully, I can say I am not one of few, but rather one of many!


Why do you think it's important for women to support other women?

Women have to take the responsibility of being a role model for all including serving as the example. This is as simple as following the “golden rule” that you have to treat others the way that you want to be treated. So, if you want positive results as a leader, you have to support other leaders who are producing great results and acknowledging the contribution they are making and not dismissing or ignoring them because of their genders.


What do you think makes you such a successful leader?

When I decided to pursue a career in higher education, a large part of the decision was based on the idea that on a daily basis I was directly and indirectly involved with people going for their dreams and goals. So, I try to remember that everything I do is going to have an effect on another person, so it is truly important for me to make decisions, create systems, implement policies and procedures, or give comments considering how others on the receiving end might be impacted.


I also try to live out a piece of advice given by (author, entrepreneur, philanthropist, and life coach) Tony Robbins of not allowing negative things to stress you out or cause anxiety for more than 90 seconds, so then you can immediately begin thinking or working on the right solution. I believe in this rule so much that I actually wear a ring on my right hand that says “90 Seconds.”


I also am a huge advocate in making physical and mental health a priority. I work out four to five times a week, and I meet with career counselors and coaches weekly.


Other areas you're a leader (outside of Endicott)? Other things you're involved in on campus?

Within the Endicott campus I serve in a variety of leadership roles, including:

Outside of the Endicott, my involvement includes:

Who is your female role model?