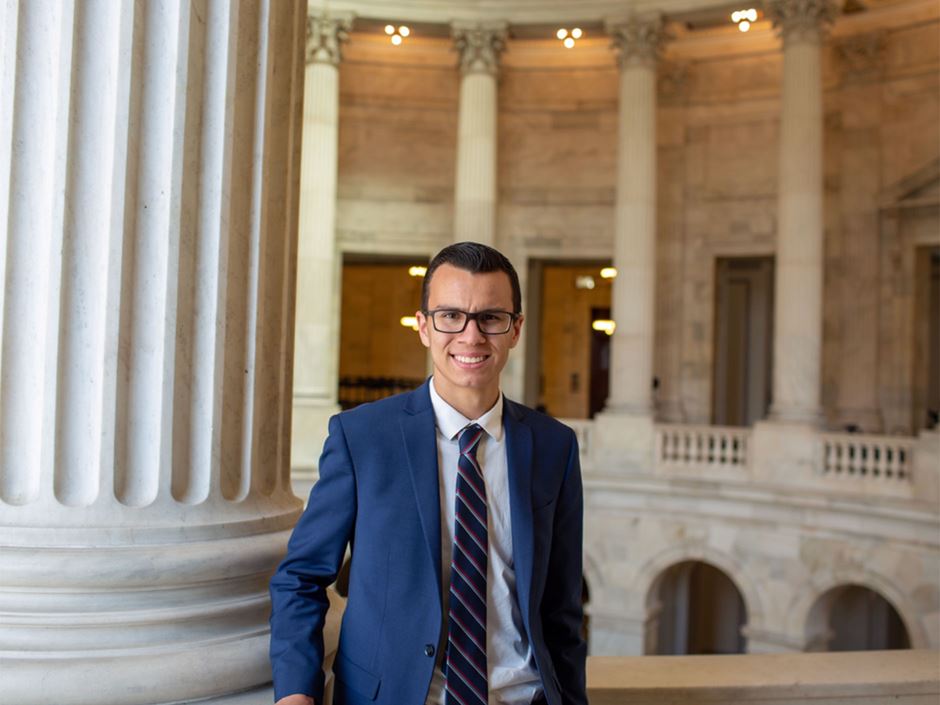 Garrett Puckett ’18 is realizing his dream of working in Washington D.C., at the center of U.S. politics.

Expectations for working in Washington D.C., are often set by what we see on TV—House of Cards, to be sure. But being at the center of U.S. politics isn’t always as dramatic and cutthroat. Sometimes, all you need is $7 for an overpriced bottle of water to make an impression.

Garrett Puckett ’18, a Wallingford, Conn., native who graduated a year early from Endicott College as a political science major, was the one who found his wallet $7 lighter when the American Legislative Exchange Council (ALEC) sent him to the Faith and Freedom Coalitions Annual Conference. But that was a small price to pay.

At my core, it was the answer to the question of what contribution would I make to our society. It was the best way I could help the people around me who I cared about.

Puckett was completing his semester-long internship with ALEC, and he was about to hear Vice President Mike Pence’s keynote speech. “Before the doors to the banquet hall were open, I had to wait roughly an hour in a reception room,” he recalls. “The only problem was that I was there alone and knew no other people. Rather than standing in the corner looking weird and attracting the suspicion of the Secret Service, I decided to buy something to have in my hand other than my phone.” That’s when the ridiculously overpriced water bottle came into play, which turned out to be a handy wingman for conversations with some of the most influential people in the country—although there was free water in the next room.

Those interactions are par for the course in D.C., and they are friendly reminders that those famous people are real, and they also once were aspiring politicians/influencers. Says Puckett, “I told someone I felt way out of my element at this event. I overheard people talking about running for Senate in 2020, and I just thought, ‘I’m an intern, no one wants to talk to me.’ The advice that I was given was simple; talk to them because at one point or another they were interns, too.”

To learn more about what it’s like to work in D.C. and how to succeed there, check out these wise words of wisdom from Puckett.

Why did you want to pursue a career in politics?
“Politics is where I felt I could best make a difference. At my core, it was the answer to the question of what contribution would I make to our society. It was the best way I could help the people around me who I cared about. Politics may be a dirty word to some, but even they have to admit that sweeping change has occurred throughout our history due to government action. Change that matters. Change that affects everyone in ways big and small.”

How has working for Sen. Deb Fischer as a policy intern been? What have you learned?
“Working for Sen. Deb Fischer has been the opportunity of a lifetime. The U.S. Senate is the most exclusive and prestigious legislative body on the planet, and the opportunity to work there is something I am grateful for every single day. Anyone with any inkling of interest in politics should spend a semester interning on Capitol Hill. The experience has been like no other.”

What is it like working in D.C.? Is it meeting your expectations?
“I’ve found the majority of people to be very personable. But you need to reciprocate. Put yourself out there. The second day of my semester internship with the American Legislative Exchange Council, I was asked if I wanted to play on their softball team that night. I had not swung a bat or thrown a ball in years, but I knew how valuable it would be to get to know the people in my office better. If there’s a reception, go to it. If you’re invited by your office to happy hour (and you’re of age), go to it. It will all be worth your while.”

What else have you learned in D.C.?
“There have been two things that stand out as vitally important to always have in the back of your head. The first is that while D.C. has tons of people, everyone in your party/movement knows each other. The conservative think tanks and advocacy groups are like one giant family. The Hill is the same way. Every interview I’ve gone on the Hill, I’ve asked my staff to reach out if they know people on that staff, and each time they know someone on that staff. The second thing is the networking with your fellow interns. Networking is huge. Endicott will drill that into you on day one. But what isn’t as widely covered is the importance of getting to know people your age who are in a similar position. Those same interns may be your future roommates, co-workers, hiring managers, etc. While you should still focus on getting to know the higher ups, don’t ignore your fellow interns.”

What are your career aspirations?
“Another piece of advice I’ve been given is that D.C is always the place to start your career and not the place to end. Use it as a springboard of connections and other opportunities. I fell in love with Capitol Hill within the first week I started and knew this is where I wanted to be long-term. I’d like to work my way up the ranks. Capitol Hill is a very hierarchal place. At a certain point, you have to choose one of three paths: policy, communications, or administrative. I’d like to go the policy route. The usual policy route starts off at staff assistant, then legislative correspondent, followed by legislative assistant, and finally legislative director. I’d like to go past this point and one day become a chief of staff. D.C. is a great place, but it really isn’t an ideal one to raise a family. Eventually I’d like to venture back to the suburbs of Connecticut and return to Congress, this time as a member. At the moment, New England as a whole hasn’t really shown an appetite for Congressional Republicans so that may be more of a pipe dream.”

Does a career in politics sound intriguing? Learn more about how Endicott can help you achieve that dream by visiting endicott.edu.