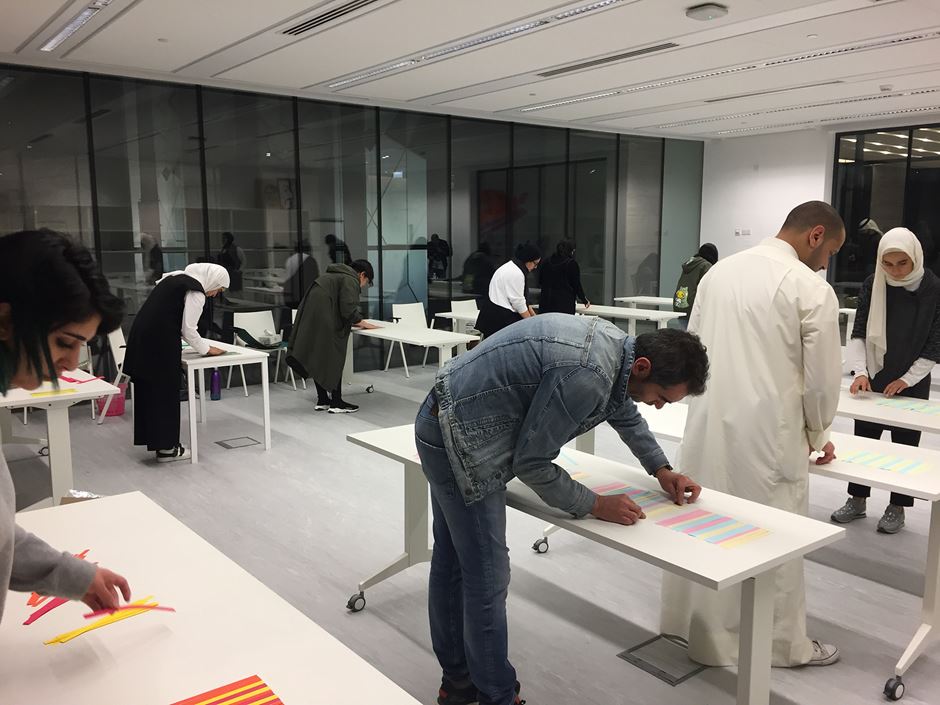 When speaking with Endicott College’s School of Visual & Performing Arts Chair of Visual Communications, David Grey, it’s evident that he is well-travelled through his deep appreciation for different cultures. Grey recently added another stamp to his already impressive passport when he participated in a design conference sponsored by -ING Creatives, an organization in Dubai known for organizing large international art and design festivals and conferences. For this "Disruptive Design" conference, -ING partnered with Khaleejesque, a design/arts organization, and chose to hold it at the Sheikh Abdullah Al Salem Cultural Centre, one of the world’s largest cultural complexes housing a total of 22 galleries with over 1,100 exhibits, located in Kuwait City.


While Grey has in-depth experience leading workshops and lectures both nationally and internationally, this opportunity was brought to him by one of his former students at Santa Fe University of Art and Design—his role prior to Endicott. His student, who is now employed at -ING in Dubai, encouraged Grey to submit an online proposal that outlined various ideas for workshops he could teach on graphic design as mindfulness practice. He was ultimately selected from hundreds of designers to lead a series of workshops alongside the well-respected Laura Prpich, a sustainable package designer and owner of Caribou Creative, and Lois Kim, a visual strategist for NASA. Each of the three presenters were given their own space with a theme, resulting in Grey leading his workshops in the appropriately-named “Mind Room.”


During the three-day conference, Grey offered a lecture on perception and phenomena called “Artful Awareness: Transforming Graphic Design into a Mindfulness Practice,” as well as two workshops, “Meditation for Designers: Training the Mind and Synchronizing the Body” and “Embracing Wabi Sabi: An Exploration of Graphic Design as Contemplative Art.” All three events were well-attended by working professionals, recent graduates, and current undergraduate and graduate students.


“I don’t show people how to make something conceptual, I introduce them to exploratory design methodologies that unfold through intuition rather than intellect,” he says. This is exactly what Grey did with attendees of the Wabi Sabi (love of the imperfect) workshop where he taught graphic design as a way of seeing, a way of appreciating, and a way of being through various hands-on activities. “It was a joy for me to see people just enjoying design elements,” he says.


Grey says that traveling outside the U.S. keeps him grounded. “It helps me appreciate that there are a lot of different ways to do the same thing. Even if we all say ‘this is the way to do it,’ it makes me realize that it doesn’t have to be that exact way. If you don’t travel, then all you see is what’s on a screen and that is a very narrow view of human expression.” So, you can imagine what his answer is when asked if he encourages his students to study abroad.


Teaching "Artful Awareness" has led Grey to many international contemplative design workshops in Milan, Madrid, Berlin, São Paulo, New Delhi, Mexico City, Guadalajara, Mexico, and of course Kuwait. He says he is always looking for the next travel opportunity where he can lend his design perspective to different parts of the world.


Prior to starting at Endicott this fall, Grey was the founding chair of the Graphic Design Department at Santa Fe University of Art and Design. He holds a Master of Fine Arts in Graphic Design from CalArts and a Bachelor of Arts in Psychology from Tufts University. He is the founder of Sun Mountain School of Contemplative Art and the publisher of Cottage Scholar. In addition to his varied freelance client list, Grey has been the art director of Clae Footwear (a Los Angeles-based skateboard company) and Palette Recordings (a Los Angeles-based techno music label). As a balance to his commercial work, he explores the subtle energies of design elements and principles as mindfulness practice, resulting in large format prints made to “both uplift and ground the space in which they exist.”


To learn more about program offerings within Endicott’s School of Visual and Performing Arts, visit https://www.endicott.edu/academics/schools/visual-performing-arts.
Share This