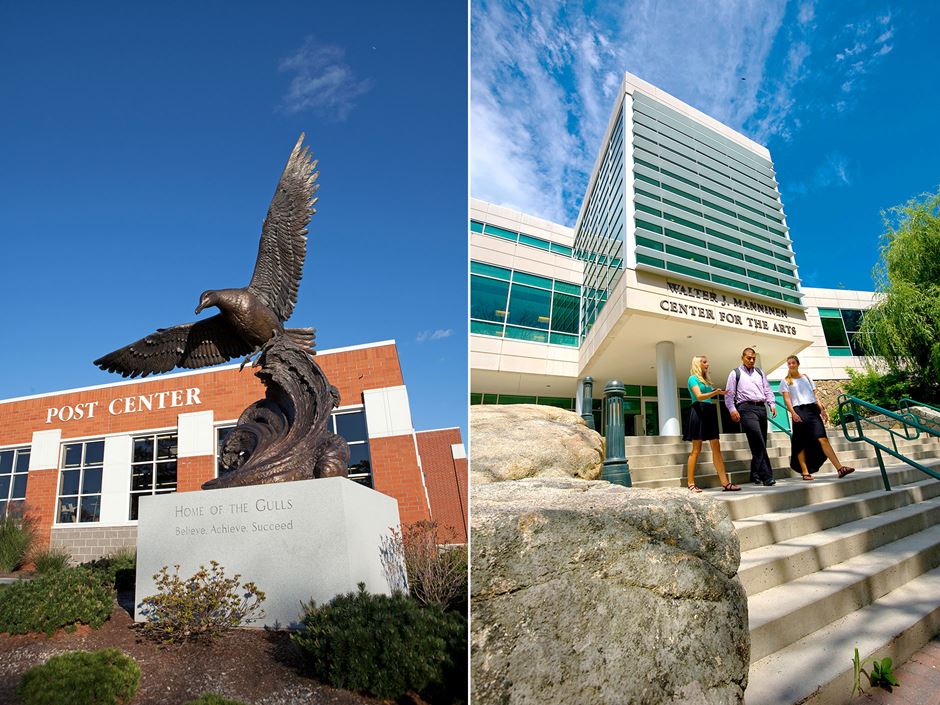 What is in a building’s name? Endicott College takes great pride in recognizing the individuals who make new facilities and learning opportunities possible for students.

The state-of-the-art Richard and Helen Post Center houses the School of Sport Science and Fitness Studies, a competition gymnasium, an athletic performance center for student-athletes, and a fitness center. It was named in honor of dedicated benefactors Helen Young Post and her late husband Richard (Dick)—a couple who have been instrumental in the growth of Endicott.

At the official unveiling in 1999, the two did not expect to see their name on the building. Helen, a 1952 alumna, explains that “it was a surprise to us when the name was unveiled, but it was a natural fit.” Her husband Dick grew up in a sports-minded household. In fact, his mother held the world record in track and his father was the manager of the U.S. Track and Field team.

"When Dick realized how much Dr. (Richard E.) Wylie loved athletics and wanted a top-notch facility for students, he encouraged him  to build it and we contributed,” Helen Post shares. “We realized what a beautiful school Dr. Wylie was creating, and my husband  and I wanted to be part of that.”

The couple was very interested in building and development and as Endicott began constructing various areas of campus, they became very involved in the process. Helen notes that each time she and Dick visited Endicott, it was more beautiful and had more improvements than the last visit. “We were so impressed with the beauty of it—the buildings, grounds, faculty, and student body. It made us want to keep giving and keep supporting.”

“We visited campus several years after the Post Center was built and on the way home Dick said, ‘Can you believe it? It looks like it was built yesterday.’” Helen says that her husband attributed the building’s condition to Assistant Vice President and Director of Athletics, Brian Wylie.

Helen and Dick have been deeply committed to Endicott over the last three decades, supporting the College’s mission and contributing to the growth in various ways—community service, Chapel programming, and scholarships.

Named after accomplished entrepreneur and art collector Walter J. Manninen, the Walter J. Manninen Center for the Arts embodies the heart and spirit of the arts at Endicott and serves as a cultural resource for the North Shore community.

While working on his estate planning in 2012, Manninen—who resides in Rockport, Mass.—put together a committee and set criteria to guide him in selecting where to gift his art collection of more than 200 works by American artists.

Manninen explains, “it was essential that my collection remain on the North Shore, be used for educational purposes, be available to the public, and be gifted to an institution that really wanted it.” Luckily, Endicott turned out to be the perfect home for his paintings—or as Manninen refers to them, “his children.”

While he grew up in a family that collected art, Manninen says that he didn’t fully develop his interest until college. “I was at a holiday party and I saw a new acquisition, Outing on the Hudson, by Theresa Bernstein.” Manninen says that the painting “reached out and grabbed him and never let him go.” He then became extraordinarily interested in Bernstein’s work and shortly thereafter he connected with her and acquired his first masterpiece, Lilies of the Field. He continued to purchase her work, along with her husband’s, before branching out and collecting pieces from two prominent art schools, the Provincetown Art School and the Cape Ann Art School.

"Endicott’s School of Visual and Performing Arts is remarkable and has such dedicated staff. It’s surreal to see my name on the building when I attend events at the College. It’s something I am very, very proud of.”

While Manninen didn’t ask that the building be named in his honor, he says it just happened, through—of course—the vision of Dr. Richard E. Wylie.

When asked what he would like to see his collection do for Endicott, Manninen says that he hopes that the College will continue to be viewed “rightfully so” for its interest in art and the enormous role that it has played on campus. Dean of Visual and Performing Arts Mark Towner says that “The impact of Walter Manninen’s donation to the College was immediate and dynamic; but was also one to have long-term benefits to our various constituencies for lifetimes to come.” Towner also says that the exhibits assembled based upon this collection are often complemented with loans of art from other institutions, furthering collaborative relationships throughout New England.