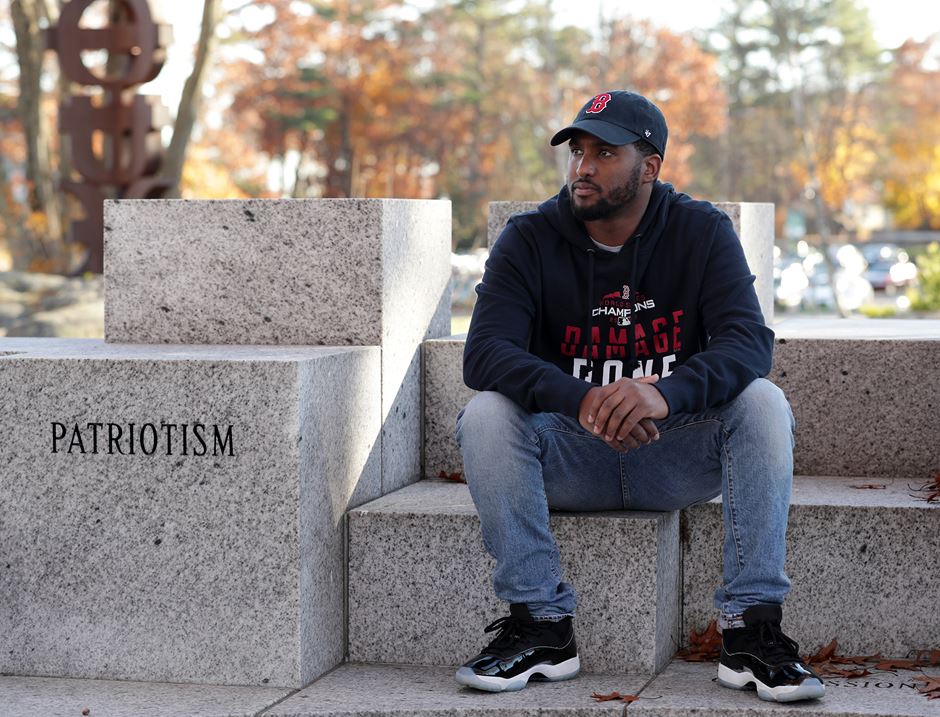 Recognizing and supporting the men and women who dedicate their talents, careers, and lives in the service of others is a top priority for Endicott.

Veterans Day formally celebrates the bravery and service of all U.S. military veterans. With 218 veteran and active military students enrolled at Endicott College during the 2017-2018 academic year, recognizing and supporting the men and women who dedicate their talents, careers, and lives in the service of others is a top priority for the College.

A sense of community is essential for all students at Endicott, but particularly for veteran students. The military is a tight group of mission-driven individuals who are committed to seeing projects through together. Recently recognized as one of the top 10 ‘Best Colleges for Veterans’ (Regional Universities North) by U.S. News & World Report, Endicott strives to provide a welcoming community for veterans and ease the transition from service member to student.


Community was something that 28-year old Army Veteran, Kalonji Fernandes ‘20, was searching for when he met a professional studies recruiter for the Van Loan School at Endicott College last fall. At the time, Fernandes was enrolled at the University of Massachusetts Boston but was feeling out of place amongst the “traditional” college population due to his age. “When the recruiter visited the school and told me what Endicott had to offer, it seemed too good to be true. I didn’t think it was real” says Fernandes.


Fernandes was intrigued by Endicott after seeing that he could get his degree faster due to the accelerated seven-week sessions, and also have a class schedule that worked with his lifestyle. He has now been enrolled at the Van Loan School since fall ‘17 and is pursuing his bachelor’s in business management. “Being able to take two classes at a time, instead of four, has leveled out my workload. School is much more manageable and I have time to meet with my professors one-on-one,” he says.


As an Active Duty Army member stationed at Joint Base Lewis–McChord in Pierce County, Wash., for more than three-and-a-half years, Fernandes says that the transition from service member, to civilian life, to college life, was difficult. “Fast-paced in the army is much different than fast-paced in school.” However, Fernandes shares that the faculty at Endicott has been willing to help him get to that next step academically. “If there is something wrong or I need assistance with something, the offices across campus are quick to say ‘hey, let’s work together to fix this.’ I feel like I have a support system.”


In addition to working closely with faculty, Fernandes has been able to connect with other veteran students through his classes and form his own community. He shares that he is constantly learning from this group of students–whether it’s through discussing the armed forces, benefits, or classes.


This past September, Fernandes attended Boots to Business Reboot, an entrepreneurship training program for veterans and their spouses. Fernandes says that the workshop was helpful and opened his eyes to the possibility of creating or managing a business of his own someday. Boots to Business Reboot was spearheaded by Assistant Dean, Angle Center for Entrepreneurship, Deirdre Sartorelli, and is the first true collaboration on veterans issues across the campus.


While he shares that his career plans are constantly changing, Fernandes hopes to pursue a career where he is able to lend his expertise in a role such as business consulting and says that he is keeping his options open when it comes to entrepreneurship.


Due to the efforts of Academic Dean of Professional Studies, Laura Douglass, and the dedicated staff of the Van Loan School’s undergraduate program, Endicott has made significant additions to benefit veteran students like Fernandes.