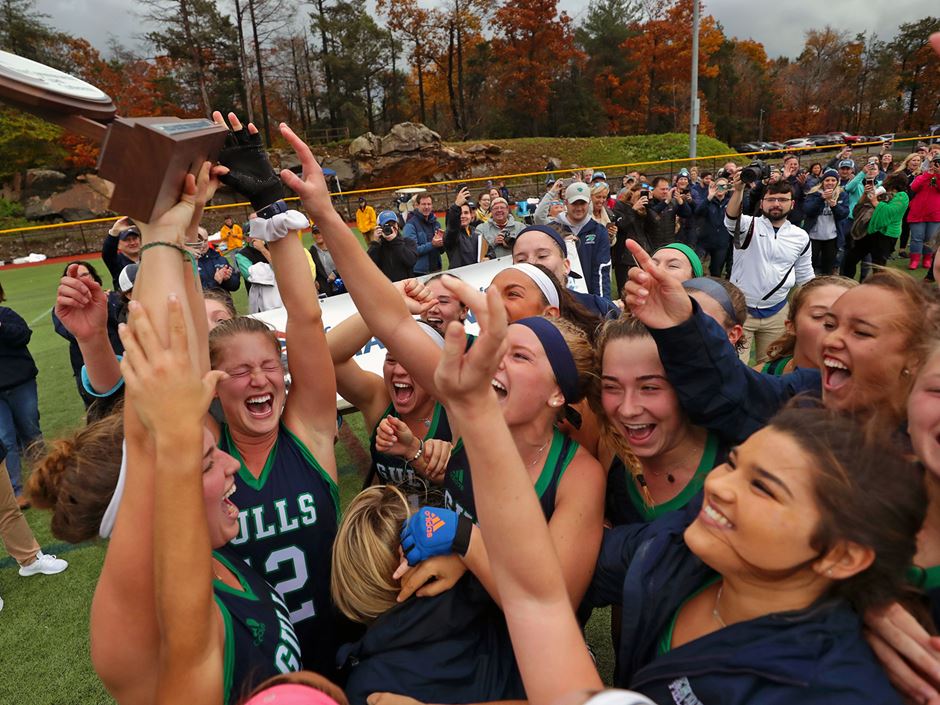 The Endicott field hockey team punched their ticket to the NCAA tournament care of a 1-0 victory over the University of New England (UNE) in the 2018 Commonwealth Coast Conference (CCC) championship game. It is Endicott’s third conference championship and the first since going back-to-back in 2011 and 2012.

“I couldn’t be more proud of this team. We lost 10 contributing players from last year’s team and when many people were questioning how we would rebuild, we came back stronger than ever.”

After battling UNE through nearly 64 minutes of scoreless play, Gulls junior elementary education major Julie Champigny buried a shot to the back of the cage, her ninth goal of the season and her first since scoring in a win over UNE back on October 2. Taylor Farrin, a sophomore athletic training major, needed only three saves to record her ninth shutout of the season.

The Gulls outshot the UNE 26-7 and held a 15-2 advantage on penalty corners, but were tested throughout the game by a Nor’easters team that came in as the four-time defending CCC champions. Endicott outscored UNE 6-2 in their three wins, including two shutouts, over the Nor’easters during the 2018 season.

“From end line to end line, we were asked to make big plays and our team responded,” said 12th-year head coach, Jodi Cipolla. “UNE did a great job defensively to make our attack work hard for a chance to convert. Our defense turned away some great scoring opportunities from their attacking unit.”

With a 17-4 overall record and the CCC’s automatic qualifier into the NCAA tournament in their pocket, Endicott will now wait for the postseason bracket to be released. Endicott is ranked fourth in the most recent NCAA New England East regional ranking and has a marquee win over MIT, the conference champions out of the New England Women’s and Men’s Athletic Conference (NEWMAC). MIT was ranked No. 13 in the country when Endicott beat them 6-0 on the road.

“I couldn’t be more proud of this team. We lost 10 contributing players from last year’s team and when many people were questioning how we would rebuild, we came back stronger than ever.”

Athletics and Recreation at Endicott

"Each and every one of us knew that we were champions from the start of the season," said senior elementary education major Cameron Molinari. "We just had to prove it through hard work, passion, and determination."

Senior account major, Maggie O'Reilly said, "Collectively, as a team, we had a goal in mind and didn't let up from it all season."

“This year’s field hockey team achieved the program goals they established back in August,” said Brian Wylie, Ph.D., Assistant Vice President and Director of Athletics. “They were centered on teamwork, persistence, and will. We are so proud of what they have accomplished.”

Interim President, Dr. Kathleen Barnes said, “Today, we witnessed an incredible accomplishment by a talented group of women. Our students, families, alumni, and supporters created an exhilarating championship environment and it was incredibly impactful! Congratulations to Endicott field hockey on winning today’s CCC championship. You have made our campus community proud!”