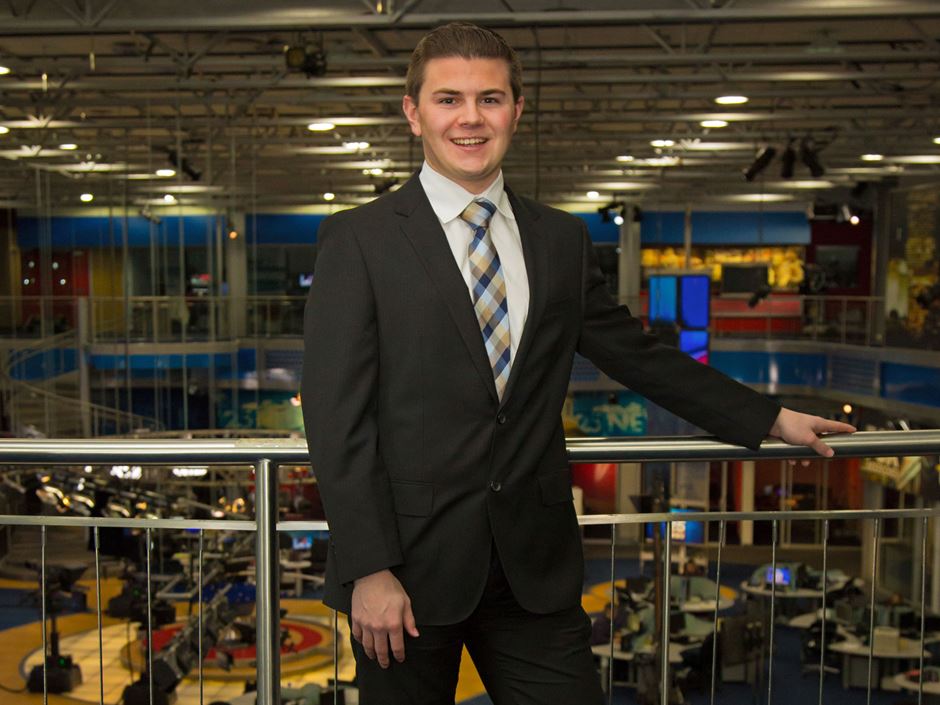 When Matt Leighton ’18 walks into the newsroom at NBC5 News in Lebanon, N.H., he has no idea where his day is going to take him. There is no daily routine as a broadcast journalist. He can’t predict whether he will be asked to interview a local political figure, investigate an unfortunate tragedy, or tell the feel good story of the week.

When Matt Leighton ’18 walks into the newsroom at NBC5 News in Lebanon, N.H., he has no idea where his day is going to take him. There is no daily routine as a broadcast journalist. He can’t predict whether he will be asked to interview a local political figure, investigate an unfortunate tragedy, or tell the feel good story of the week.

What he does know for sure is that he is working his dream job and Endicott’s School of Communication and the College’s experiential learning model prepared him to be a reporter.

If it wasn’t for Endicott, I would not be where I am today. I credit the academic curriculum, the extracurriculars, and most importantly, the experiential learning model.

“Having the ability to intern in a newsroom in my freshman year of college led me to pursue other internships and eventually a part-time job at WCVB-TV,” said Leighton, a digital media major concentrating in digital journalism from the School of Communication. Leighton started of his experiential learning journey at WMUR-TV as a news intern, picked up his second internship with WFXT-TV working as a fill-in assignment editor/ newsroom intern, and then got a key part-time position with WCVB-TV as an assignment editor under the Hearst Television umbrella. He would ultimately end up in his current role at WPTZ-TV, the NBC and Hearst affiliate serving the Plattsburgh, N.Y. and Burlington, Vt. areas.

Over the course of his three internships and the part-time gig at WCVB-TV, Leighton would acquire a unique skillset that made him a better student and, most importantly, prepared him to be gainfully employed from the second he walked off the stage at Commencement this past May. He worked the assignment desk, monitored scanners and social media for news stories, wrote scripts for newscasts and published online stories, created on-air graphics, assisted reporters and producers by researching leads, assigned field crews and equipment for coverage, and collaborated with other news affiliates.

“I learned most aspects of the industry at my internships, but with the small class sizes and having close relationships with my professors, I was able to apply what I learned in the field to the classroom. My professors molded the curriculum to make sure that we could succeed and focus on our interests.”

In just a few short months on the job at NBC5 News, Leighton has seemingly seen it all already. There have been terrible tragedies including two fatal car crashes and a story of a grandmother and her grandson who drowned, where he was asked to interview devastated families. There have also been heartwarming stories. One in particular stood out.

“There were two women who posted handwritten messages on a bridge in the area that has seen a number of people jump off in apparent suicides. One of the women lost her mother to suicide. She and another woman wrote these messages encouraging those who were thinking of jumping not to. They didn’t know who might read them, but wanted people to know that others are out there to help.”

No matter the content of the story, Leighton takes his assignment and does the job he was prepared to do by his professors at Endicott and his colleagues on internship. The formula for success at Endicott, Leighton says, is clear cut.

“My advice for anyone considering journalism is to complete as many internships as you can. Working alongside professionals and learning from them is key in this business. With the incredible experiential learning program at Endicott, you are able to complete three internships so make the most of each one.”