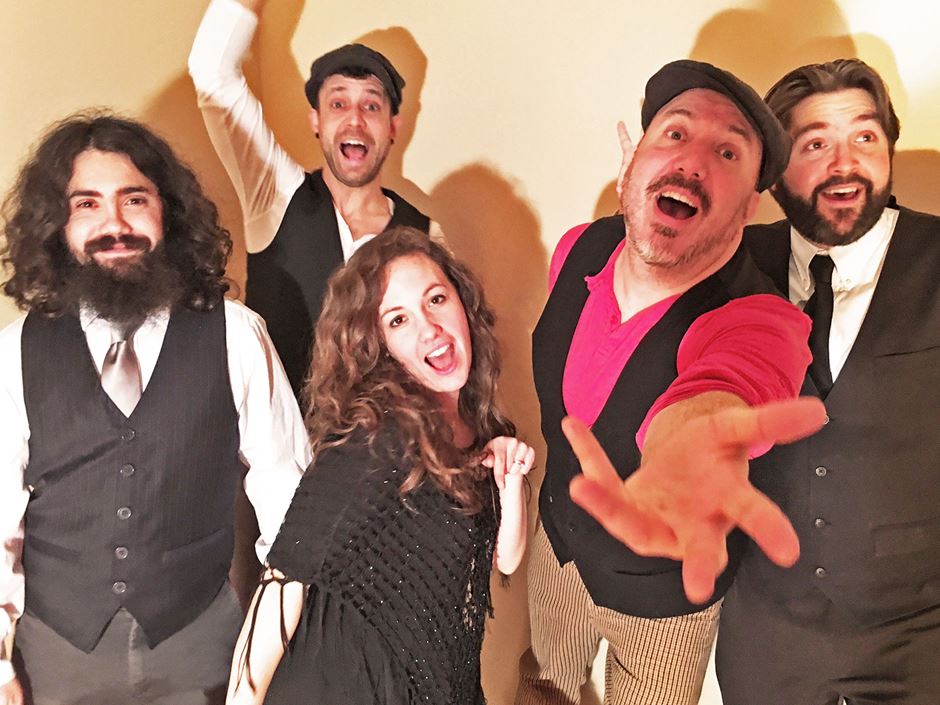 Singer-songwriter Brian King, violinist Nathan Cohen, and guitarist Joe Cardoza will preview a few selections from their neo-cabaret, alt-rock show "Gravitational Fool" at Endicott College’s Manninen Center for the Arts, Rose Performance Hall, on Friday, September 21, 2018 from 12-12:45 PM as part of Endicott’s “Fridays in the Rose” series. “Gravitational Fool” will be presented as a full production with live band and aerialists on Thursday, September 27, 2018.

This preview (and the full show) asks audiences to consider: “How often do we play The Fool?” Society has often relegated “the queer” to various roles: the clown, sad Pierrot, the sissy, the funny fop, the lonely dandy. But how do these archetypes both empower and limit our identities and relationships? Brian King performs an internal/external wrestling match onstage with catchy and uplifting music.

The show is free and open to the public, but it is wise to reserve seats. Please visit tickets.endicott.edu for tickets, and www.endicott.edu/centerforthearts for more information on both the preview and the full show. Following the show, guests are also encouraged to attend the reception in the Carol Grillo Gallery where we will have complimentary appetizers and beverages.

Lead singer, Brian King, is a singer, songwriter, and performance artist acclaimed for his gender-defying voice which Whoopi Goldberg once said was the last sound she wanted to hear before sleep to ensure beautiful dreams. With his original songs, Brian carries audiences through raw meditations on love, sexuality, and identity. Both solo or with his neo-cabaret band, What Time Is It, Mr. Fox?, Brian King has performed to packed houses like Oberon and Club Passim in Cambridge MA, Dixon Place, Joe's Pub and The Duplex in NYC, and venues throughout the US.

Named after a Victorian children’s game, What Time Is It, Mr. Fox? can time-travel from 1960’s New Orleans soul to the minstrels of Medieval France before landing in the Tin Pan Alley era of NYC.  Led by the gender-defying voice of Brian King, the ensemble delivers their own brand of smoky cabaret, neo-soul and acoustic noir, sounding something like Tom Waits and Amy Winehouse performing in a French cafe. What Time Is It, Mr. Fox? is known for its original songs which marry rich lyrical imagery with a cinematic sensibility, exploring themes of love, spirituality, sexuality, and identity.  Whether stripped down for acoustic coffeehouses and living room concerts or immersive multimedia shows in clubs and theaters, Mr. Fox brings honesty, energy, and emotional authenticity to every performance.

The group began as a duo when singer-songwriter Brian King and violinist and trumpeter Nathan Cohen performed in a New Year’s Eve concert in 2004. The band quickly became a staple in Boston’s underground cabaret scene, blending music with elements of circus, dance, and performance art. The band’s debut full-length album “And Other Stories” was released in 2008 at a sold-out release party with circus performers and animation at the Gloucester Stage Company, followed by an enormous fairytale-themed extravaganza at Galapagos in Brooklyn. Following the album release their original song "Cold Rain" was covered by New Orleans Soul Queen, Irma Thomas, on her Grammy-nominated CD "Simply Grand," with the track earning high praise in Rolling Stone, USA Today & The Village Voice.

Establishing a strong following in NYC with regular shows at The Duplex in Greenwich Village, What Time Is It, Mr. Fox? expanded to include five backup singers, guest string and accordion players and dancers. Their second album, “A Little Of Blue,” followed in 2013 with CD release parties at theatrical spaces Oberon (ART) in Cambridge MA and Dixon Place in NYC.  The track “The Ladies’ Tree” was turned into an animated short by acclaimed filmmaker and Harvard Professor, Ruth Lingford, and selected for numerous international film festivals including 2014 Anima Mundi, Brazil. This was followed by videos for “Helium” (director, Emile Doucette) and the haunting “Deep Waters” (directed by Brian King).

In 2014, the band reformulated into a 5-piece ensemble incorporating Dennis Monagle on drums, Renée Dupuis on voice, keys, and melodica, and Joe Cardoza on upright bass along with founders Brian King and Nathan Cohen. In April 2015 the band toured through the American South, performing to enthusiastic crowds in living rooms, theatres, and art spaces.  In 2014 and 2015 What Time Is It, Mr. Fox? was featured in the Afterglow Festival in Provincetown MA, a performing arts non-profit founded by Quinn Cox and Tony-Award winner John Cameron Mitchell.  The festival gave birth to the band's theatrical show "Gravitational Fool" which was then produced by Afterglow with the American Repertory Theater (ART) in July 2017, and will soon be presented throughout New England.  In 2017 What Time Is It, Mr. Fox? released a 5-song EP “Live on the Radio” from a studio appearance on WMFO Tufts Radio, Medford MA, showcasing the band’s current live sound. In addition to performing regularly, What Time Is It, Mr. Fox? is currently writing a musical.

Praise for performances by What Time Is It, Mr. Fox? And Brian King: "Time has come for Mr. Fox,” from The Boston Herald, "Catch him as his star rises,” from Time Out New York, and “a triumph of mood and style, an unforgettable musical, theatrical and emotional experience.”- Edge For music, tour dates, and other information, visit www.whattimeisitmrfox.com