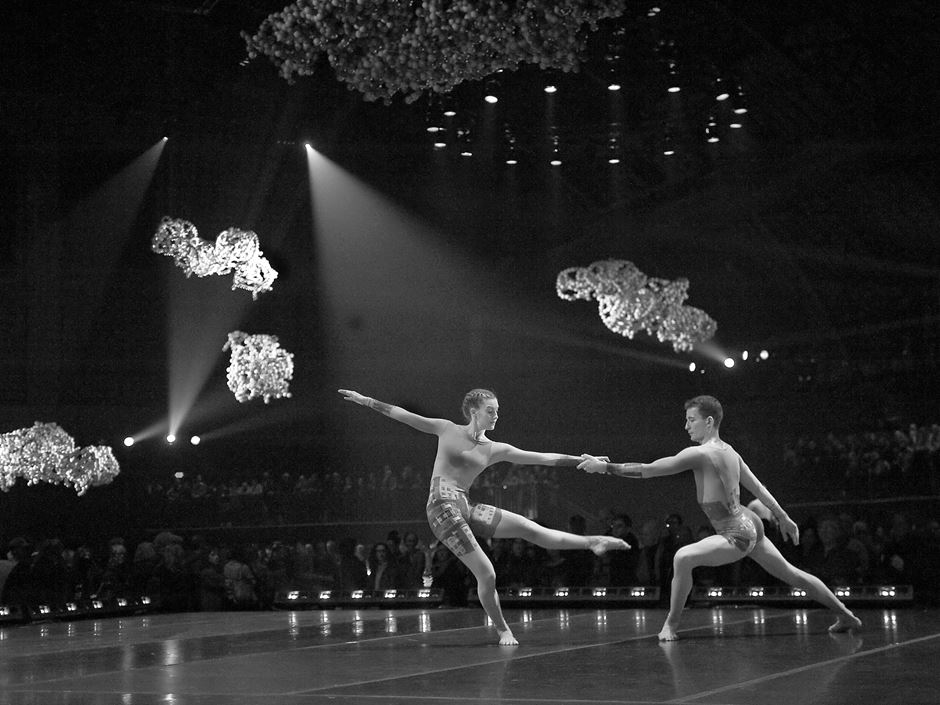 Performance photographer Stephanie Berger from New York City, is exhibiting her works in the solo exhibition Between the Lines: Performance Photography by Stephanie Berger, in the Spencer Gallery at Endicott College.  Her artist talk and reception will take place on Thursday, April 12 starting at 4:30 p.m. About her work Ms. Berger said: “In my work photographing the performing arts, I look for the split second between the action, to show tension and energy, stillness and movement, and the rhythm within the frame.”

Over the past 25 years, Ms. Berger has photographed countless works of groundbreaking and famous directors, choreographers, and performance artists in the New York City cultural scene.  Their creative multi-disciplinary sensibilities are linked across different aesthetics and approaches.  From pioneers of contemporary dance such as choreographers Merce Cunningham, Pina Bausch, Tanztheater Wuppertal, and Trisha Brown, to the experimental theater of Robert Wilson and Philip Glass, or Julie Taymor’s stylized operas, frozen moments are captured to reveal the creative forces present in the experience of live theater.

The formal qualities of photographing dance are like seeing music come alive through the body.  Responding to the sounds and shifts of tempo, Berger interprets the light, composition and the split-second to press the shutter. She states, “I improvise and anticipate the timing, letting the beauty of what I see fulfill the frame. Putting a frame around the space and responding to those moments between the lines energizes the figures within the photograph.”

Ms. Berger has exhibited her photographs in galleries and public art spaces including exhibitions at The Pitts River Museum at Oxford University where she did a Spotlight Talk to the Public; The New York Public Library for the Performing Arts at Lincoln Center; The New York State Theater Gallery; The Walter Reade Gallery at the Film Society; John Jay College Gallery; Curtis Gallery at New Canaan Public Library and numerous group exhibits, including Lower Manhattan Cultural Center, ARTSWestchester and Atlantic Gallery. Her outdoor photo installation, “Dancing in the Streets,” curated by Aperture’s Melissa Harris and designer, Yolanda Cuomo, was a featured exhibition at the LOOK3 Photo Festival in Charlottesville, Virginia in 2013.

She recently published her first book of photographs, “Merce Cunningham: Beyond the Perfect Stage” released by Damiani Press. It celebrates the final landmark performances of the Merce Cunningham Dance Company in the New York area: a series of performances of “Events” (2007-2009) at Dia:Beacon in Beacon, NY and the conclusion of the Company’s performing life at the Park Avenue Armory. This past summer, she presented her dance photographs at Jacob’s Pillow, the prestigious dance center in Beckett, Massachusetts and was interviewed for a PillowTalk there by historian, Maura Keefe. Berger graduated from the University of Massachusetts in Amherst and studied photography at Hampshire College with Jerome Liebling. She worked as a photographer for the City of New York’s Department of Transportation in the 1980s climbing to the tops of bridges to document New York City’s infrastructure and public works. Many of these photographs were displayed throughout the New York City subway system. She is also a member of the 52nd Street Project.

Please join us on Thursday, April 12 from 4:30 – 5:00 for an Artist’s Talk with reception to follow from 5:00 – 6:30 p.m. This exhibition is funded in part by the van Otterloo Family Foundation. Exhibition, reception, and gallery talk are free and open to the public.