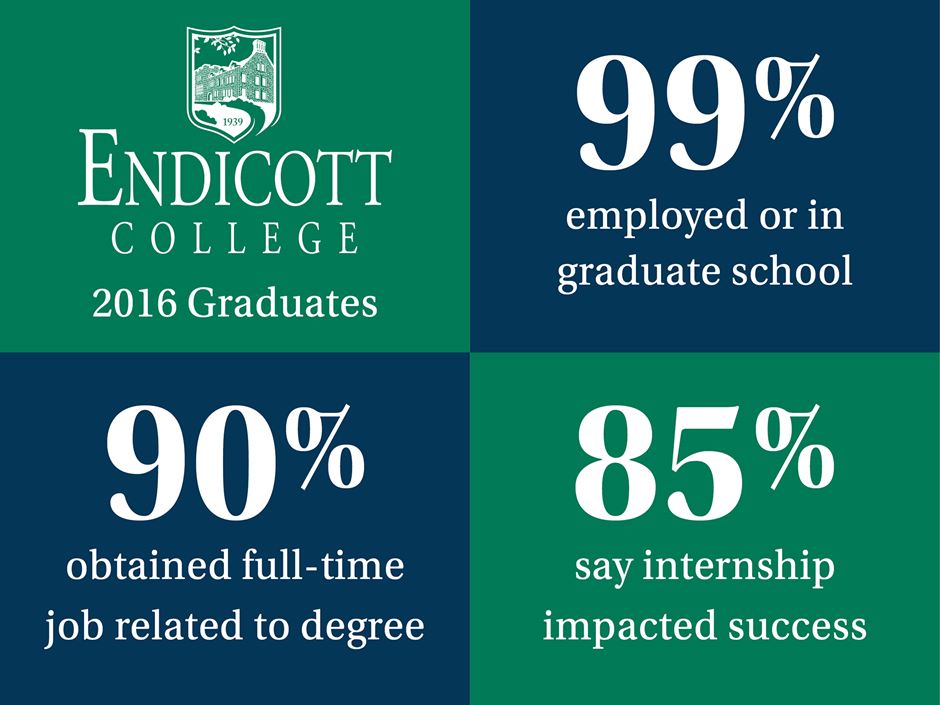 That’s the hope for all college students—that there’s a good job waiting for them at the finish line. Endicott’s helping students fulfill this hope. In fact, 90 percent of Endicott’s 2016 graduates found a full-time job related to their degree. Eric Hall, dean of the internship and career center, thinks Endicott’s three required internships are behind the career success Endicott students are experiencing after graduation. “When you’re able to participate in an internship, you’re able to test and validate if you’re in the right space,” said Hall.

Gallup’s recent article titled Why Colleges Should Make Internships a Requirement reported that, “among bachelor degree graduates from 2002-2016, only 27 percent had a good job waiting for them upon graduation.”

Hall said that this number is surprising given the education sector’s stress on ROI. “If I were to look at 27 percent from an administrative capacity, I’d be concerned,” Hall shared, saying that as a macro trend this figure could get a little discouraging. But, Hall added, if we’re looking at our numbers at Endicott, “in terms of students who indicate that they’re satisfied with their career, it’s right around mid-eighty percent. Which is significant.”

The experiential learning that internships provide help give students the insight they need to ultimately decide on a future career. And they’re getting it first-hand through on-the-ground learning. Hall explained that having students engage in internships their first and second year of college encourages exploration, which gives students added clarity that their major and their career path is the right fit for them. “There’s some nice synergy there,” said Hall, “because students can validate and test out whether they’re in the right career field and, at the same time, in the right major.”

Gaining that validation during college helps bring the value of their investment in their education into focus. As Gallup’s article stated, “… graduates with work-integrated learning during college are more likely to value their degree after college.” Who doesn’t want that?

“When students graduate they understand the value they’ve derived,” said Hall. “That gives their degree more weight and provides students the opportunity to attach meaning to their education.” The Gallup article also stated that the students with meaningful work experiences are not only finding good jobs, they’re finding jobs in fields related to their undergraduate studies. Hall explained, “In job interviews, our students don’t only talk about their skills from a classroom perspective, they’re able to share real experiences of how they applied and strengthened certain skills during internships.”

It all comes down to what organizations are looking for in their employees. Hall explained, “Internships give students the ability to develop the skills that are in such high demand and highly sought after by employers. There’s a lot of value derived and our students certainly stand out in that regard.”

For more information on internships at Endicott, call or email the Internship and Career Center at 978-232-2330 or careers@endicott.edu.