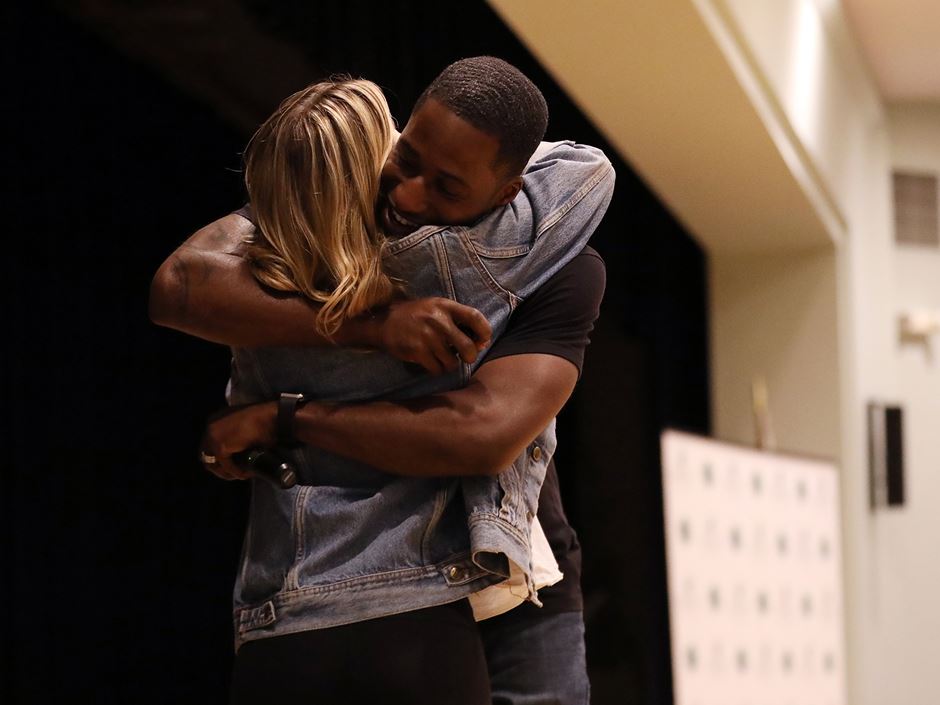 Who doesn’t like a free hug? It’s a simple, friendly, embrace that makes others feel good and—even better—loved. Ken E. Nwadike Jr., founder of the Free Hugs Project, knows the true power of spreading love by way of a free hug, because he’s seen it go viral.

To kick off Random Acts of Kindness week, Endicott College welcomed Nwadike to campus on Monday, February 12, to share his story of homeless teen turned motivational speaker and peace activist dedicated to spreading the spirit of love.

As a teen, running was always Nwadike’s outlet. “When you’re a homeless kid in Los Angeles the hardest struggle was fitting in at school,” said Nwadike. It wasn’t until the high school track coach asked him to join the team that Nwadike felt like he found his place, “I finally felt like I had friends after all the years of keeping to myself while I was at school.” Fueled by his coach’s encouragement and his teammates support, Nwadike ran his first mile in 4 minutes and 17 seconds. “It changed my life almost immediately,” he said.

Having the support of a coach who empowered him to take charge of his future, Nwadike was left inspired to do the same for others. “I wanted to do the same for other kids in shelters where I grew up and inspire the kids at the shelter to turn their circumstance around.” He did this by becoming the director of the Hollywood Half Marathon, a run to raise funds and awareness for local youth charities and shelters in Los Angeles.

Shortly after, news broke about the bombings of the 2013 Boston Marathon and Nwadike, again, knew he had to do something. “I didn’t want to see these acts of hate and terror prevent us from doing the things that we love,” Nwadike said.

After failing to quality for the 2014 Boston Marathon by just 23 seconds, Nwadike began his one-man peace movement by giving out free hugs to thousands of runners at the race. He captured the event on video and the video went viral. “To me it was such a simple act of love I didn’t think it would create this huge viral moment,” said Nwadike, “It shows how much we lack love in the world.”

“I really started to realize what I was doing and that we were all human beings in need of love,” Nwadike said.

He wondered what would happen if he started showing up in places of conflict where he knew there would be a lot of hate and volatility. He began showing up at riots as a symbol of peace between protestors and cops and people in opposition. His peace-keeping efforts during recent protests, riots, and political rallies have gained attention.

He said, “One of the common themes is that people are not talking to each other.” When he’s in these areas of conflict, he said, “We confront it, head on, and we talk about it.”

Nwadike continues to be an example of love in the world as the Free Hugs Guy. It’s important work, he says, “I’m traveling around the country to try and influence culture.” But, it’s key for others to see themselves as leaders, too. “It’s so important to try and change this situation that we’re in right now,” he said.

At the end of Nwadike’s presentation, he opened it up for questions. A student asked, “Can I get a hug?” Nwadike replied, “Yes!”