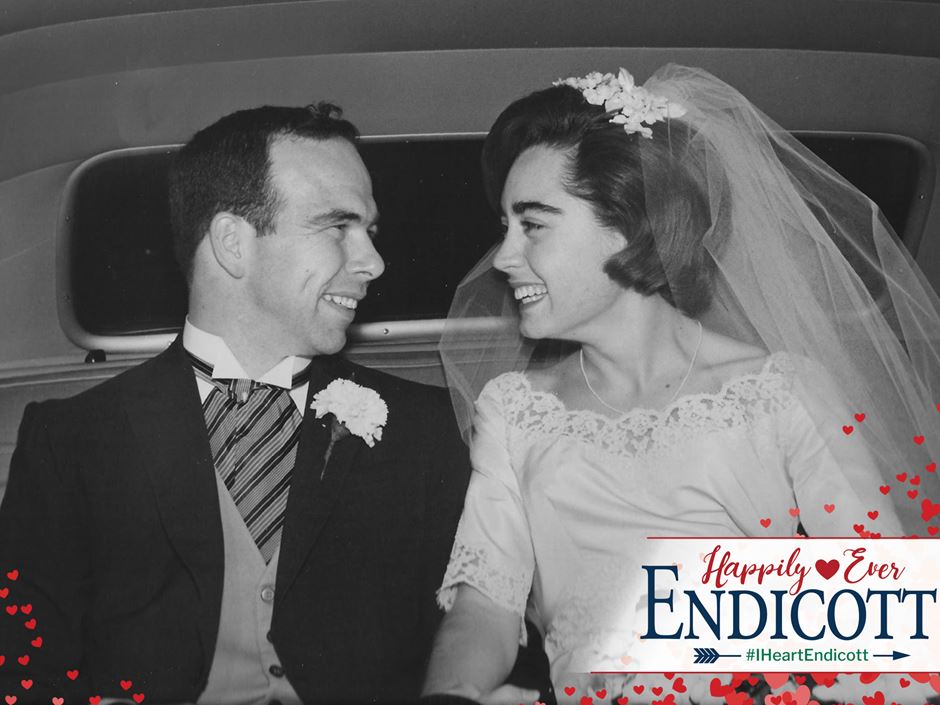 Maybe you met at Orientation or locked eyes at the Post Center. Whatever your love story is, we’re honored to be a part of it.

Maybe you met at Orientation – or waiting for mozzarella sticks at the Lodge. Perhaps you locked eyes at the Post Center or had a chance encounter in the mailroom. Whatever your love story is, we’re honored to be a part of it.

Janet Ordway Atwater ‘52
I started my freshman year at Endicott on a Friday, and I met Jim (James Russell Atwater Jr.) on Sunday at the Episcopal Church Fellowship Meeting. Jim was from the start, and always will be, the love of my life. Jim and I will celebrate our 65th wedding anniversary in March. We continue to celebrate our lives together, thanking God for bringing us together those many years ago while I was at Endicott. – Janet

Linda Pasco Lane ‘64
In addition to the great education I experienced at Endicott, I also met a wonderful man who became my husband. Brian (Lane) and I met at a mixer at Endicott the second week after my arrival in September ‘62. He asked me to dance and we have been together ever since. We were married in ‘65 and we have two great children and five beautiful grandchildren. Without attending Endicott and going to the mixer, I would not have had such a wonderful life. – Linda

Sally Bates Allen ‘65
We met on a blind date, as our roommates were dating. We spent the whole day at Crane Beach. We could not stand each other at first and, unknown to each other, we both decided around the same time to be nice to one another since we were stuck with each other all day. Phil (Allen) knew at the end of the day that he was going to marry me. It took me a little bit longer! One and a half years later we were married. – Sally

Barbara Wiggett Baumann ‘86
My then-boyfriend (John Baumann) would drive from Vermont to Endicott most weekends and sneak into my room on the 'Terrace' of the former Ebinger Hall. After all, it was a women’s college back then. One morning he suggested we go to the Liberty Tree Mall, and somehow ended up back at the dorm with a ring, where he then proposed! My dear friend, Lisa Bartlett-Collin, lived two doors down and was a photography major. She shot our engagement photos on the beach. She and another Endicott friend, Joy Brigham Taylor, were in the wedding, and we remain friends today. – Barbara

Theresa Armstrong Dickson ‘88
We met during the last month I was at Endicott. I took a job at the local convenience store in Beverly Farms. I meet this very funny, younger guy (Will Dickson) and we became good friends and dated for a bit, but life took us in different directions. We reconnected years later, and we will celebrate our 18th wedding anniversary this June. – Theresa

Sarah Ellis ‘01 and Steve Enos ‘01
Steve was one of the first people I met at freshman orientation. He says it was love at first sight. We were just friends throughout school because we were never single at the same time. One year, Steve would greet me by asking if I was still with my boyfriend. We had our first date senior year and have been together ever since. – Sarah

Kelly Reid ‘01 and Jared Fogel ‘01
We met at freshman orientation in the summer of 1997, and we instantly became best friends. For the next four years, we were always there for one another. We began dating after graduation in 2001 and were married in 2007. We thank Endicott for the education that gave us the foundation for great careers, and  for bringing us together and giving us a life of love and happiness. – Kelly

Emily Goodnough ‘02 and Jacob Bersin ‘00
I zoned out during my PR class and realized I had been staring at him across the room for a full half hour. I approached him after class to apologize and the rest is history. We've been together 18 years – married for 13 years – with two beautiful children. Endicott is in our blood and we love it as much as we love each other. – Emily

Ashley Wallace ‘06 and Kevin Jones ‘01
My husband and I just missed each other as he graduated in 2001, and I began in 2002. But our connection happened the summer I graduated in 2006. Had it not been for the incredible friendships we made during our tenure at Endicott, we may have never met. – Ashley

Melissa Luker ‘07 and Mike Spellman ‘07
It all started in 2003, at the Post Center during the first week of our freshman year. We made eye contact during our workout and that is all it took... love at first sight! Mike cut his workout short and walked with me back to Brindle Hall. That was the beginning of forever. Eight years later, on July 31, 2011, we tied the knot in front of the Tupper Manor fountain. Today, we live in New Jersey with our children, Luke (4), and Natalie (2). Endicott will always hold a very special place in our hearts! – Melissa

Dana Jones ‘08 and Ben Bettez ‘05
Ben and I were at Endicott together for two years, but for those two years we only had brief, chance encounters -- when I was working in the mailroom and he was getting his mail, or when I happened to be in the lobby of Ebinger with friends and he was coming back late at night from his internship. It wasn’t until a weekend after he graduated and was back on campus to visit friends when we finally “met.” It’s been 12 years now and we have taken risks together -- started and left our first real jobs, gotten married, bought a house, and have had two children. It’s funny to look back and think we were in the same place at the same time for two years. Because of that, Endicott’s campus will always hold a special place in our hearts and in our family. – Dana

Alisa Vargas ‘03 and Andrew West ‘04
Alisa and I lived in the same dorm, Ebinger, my freshman (her sophomore) year. She asked me to go to a Bruins game, and things took off. We supported each other competing at countless Endicott cross country meets, and baseball and football games. The foundation of our love and relationship was formed in our years at Endicott, and we’ve been forever grateful to have fallen in love at such a special place and time in our lives. – Andrew

Bailey Mitchell ‘05 and Justin Haire ‘05
We were friends freshman year, but did not start dating until our junior year. We got married at Misselwood in 2009 (it poured rain!). Dr. Wylie even let us have our rehearsal dinner at his house overlooking the water! We now have a beautiful 3-year-old daughter. Without Endicott, we would not be where we are today, both personally and professionally! – Bailey

Sarah Richardson ‘09 and Chris Kuzyk ‘10
We met at Endicott during my junior year (Chris' sophomore year) in Mod 10. It was the night before winter break. We hit it off right away and continued to chat on AOL AIM during the break. We started dating when we returned from break. Fast forward six years, and Chris brought me back to Endicott and proposed to me in front of where we met, Mod 10. My college roommate/best friend was there to take pictures! We got married on September 17, 2016, in New Hampshire. – Sarah

Katelyn Baker ‘10 and Michael Meredith ‘09
Timing is everything. Mike and I were in some of the same classes at Endicott. We passed each other and sat in the same room together many times, but never spoke. It wasn’t until several years after college that we both lived in Salem and went on our first date. We bonded by talking about the classes we took together and the professors we had. The rest is history! – Katelyn

Allison Muise ‘10 and David Barry ‘10
Dave and I met on the volleyball court at Endicott Beach two weeks before Senior Week. There was a tournament,and he and his roommates showed up with seven men, when the rules clearly stated two women had to be on the court at all times. My roommate and I were at the beach and got roped into playing with him and his team. We ended up winning the whole tournament. We both ended up coming back to Endicott for grad school and fell in love while I was tutoring him in accounting. We got married at Endicott a little over two years ago! – Allison

Lorelei Skinner ‘12 and Cord Tocci ‘12
Lorelei and I didn't know each other until we met at our senior-year, semester-long internship at EBSCO. It was crazy to think, considering the student population of Endicott College and all of our mutual friends, that it took us that long to find each other. Our relationship developed over the rest of senior year, 'officially' becoming a couple just a few months before graduation. We bought a home together in July 2017 and were engaged in November 2017, with our wedding set for October 2018! – Cord

Makenzie Picking ‘12 and Jonathan O’Bryan ‘13
We met on an alternative spring break trip to New Orleans with Habitat for Humanity in 2010. We spent the week painting a woman’s house that got ruined during Hurricane Katrina. We fell for each other that week, having fun during the day and through the group workshops at night. We have been together since. Had it not been for Endicott’s incredible Alternative Spring Break program bringing like-minded and hearted people together, I wouldn’t have met my soulmate. – Makenzie

Amanda Lerner ‘14 and Eric Trant ‘14
We met in Marblehead Hall our junior year and have been inseparable ever since. In 2013, Eric and his two roommates ran the Boston Marathon and my roommates and I went to cheer them on. Sadly, they were 5 minutes away from the finish line when the tragic bombs went off. None of us were hurt, but Eric was determined to run the race again. In 2017, he did just that, and to my surprise, he proposed at Mile 26 with all of our families and friends there! Of course I said yes and we crossed the finish line together. I thank my lucky stars  for Endicott giving me the greatest love story, maid of honor, and bridesmaids I could ask for. – Amanda

Katy Kulakowski M‘15 and Mark Kulakowski, Jr M‘05
Mark has worked in athletics at Endicott for 16 years, and we got married at Misselwood in 2009. We both got our master’s degrees at Endicott, and now I’m an adjunct in the School of Nursing. Our kids know daddy’s work as ‘the Gulls.’ – Katy 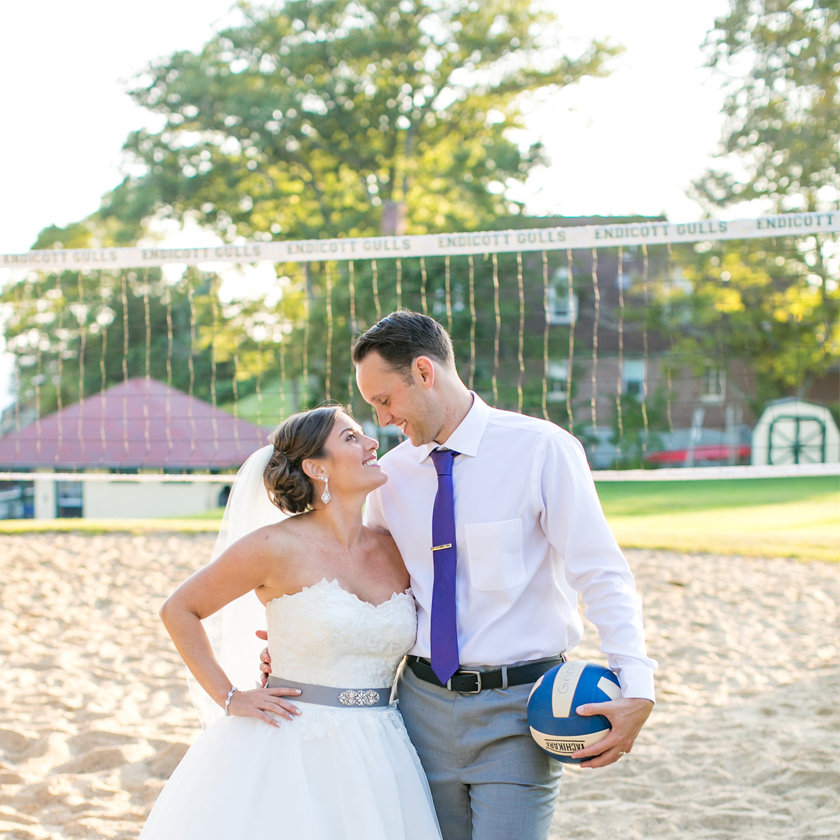 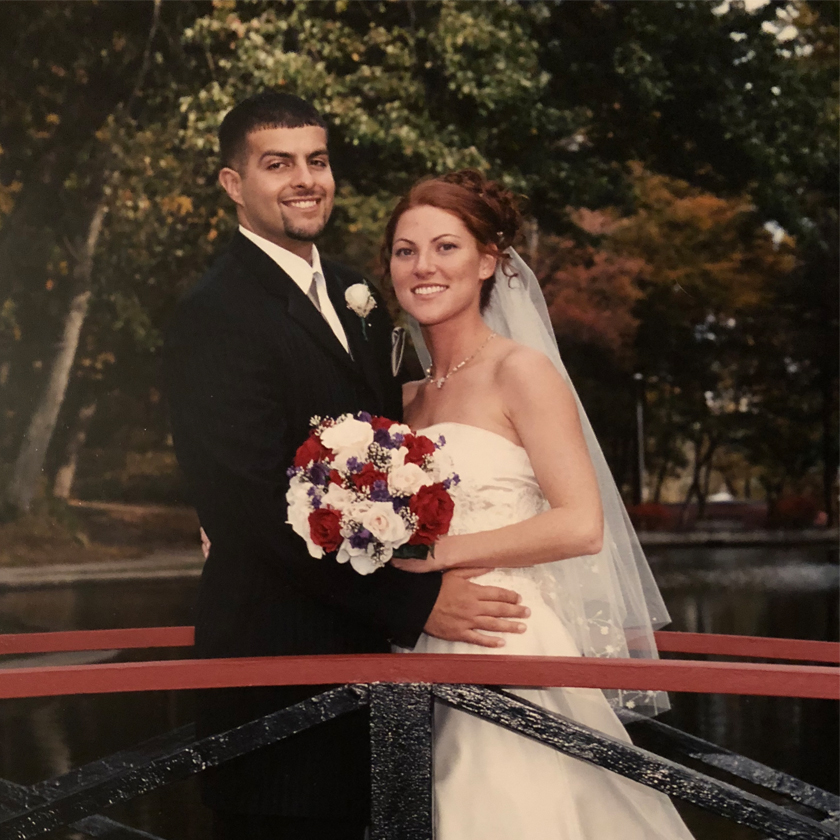 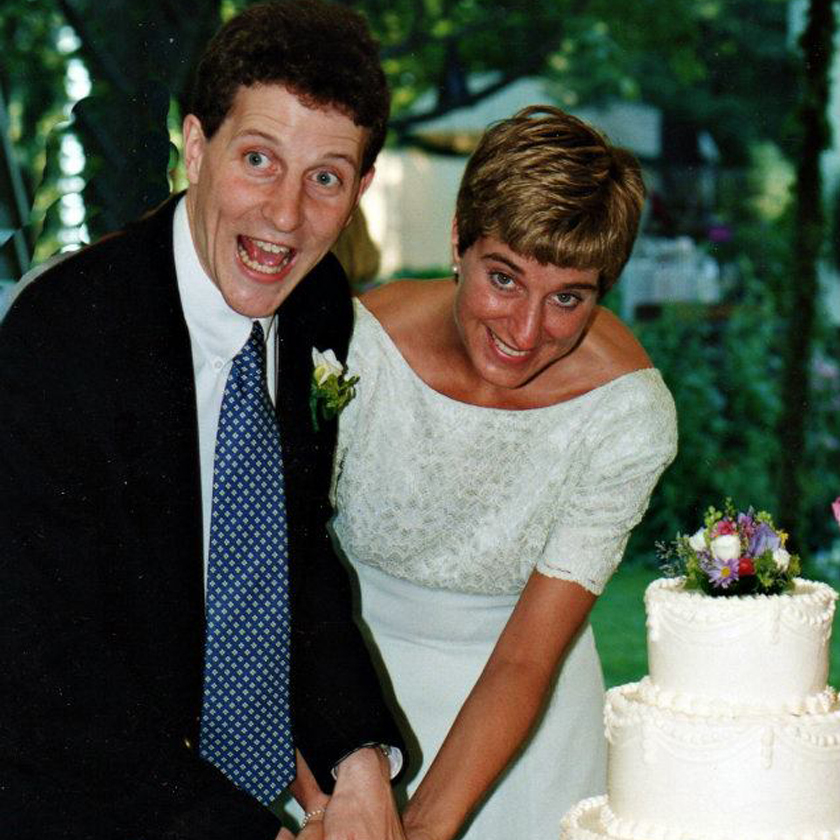 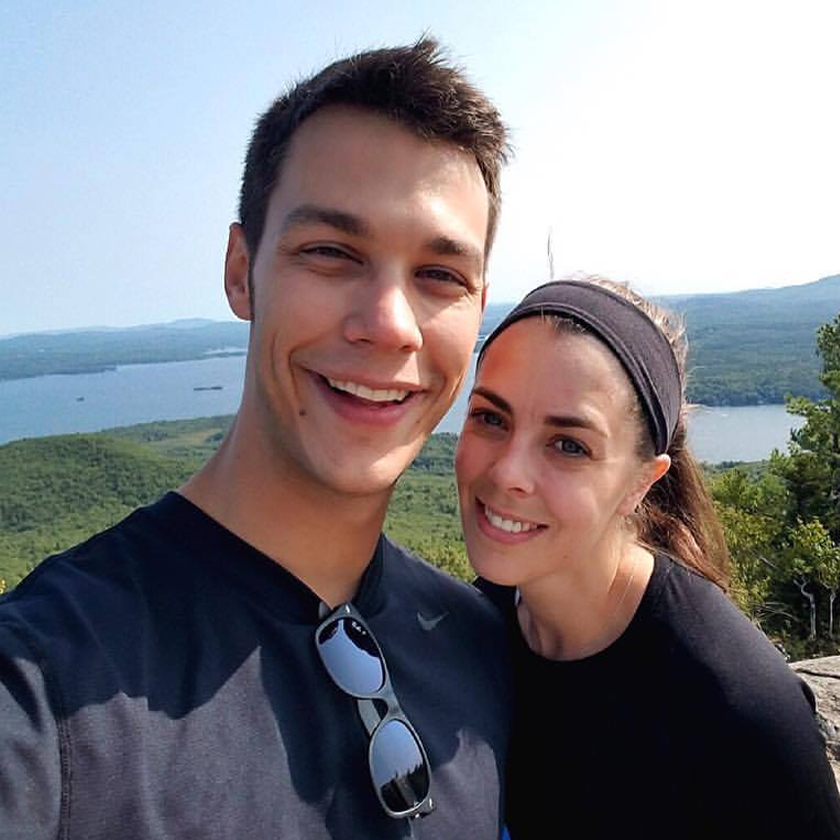 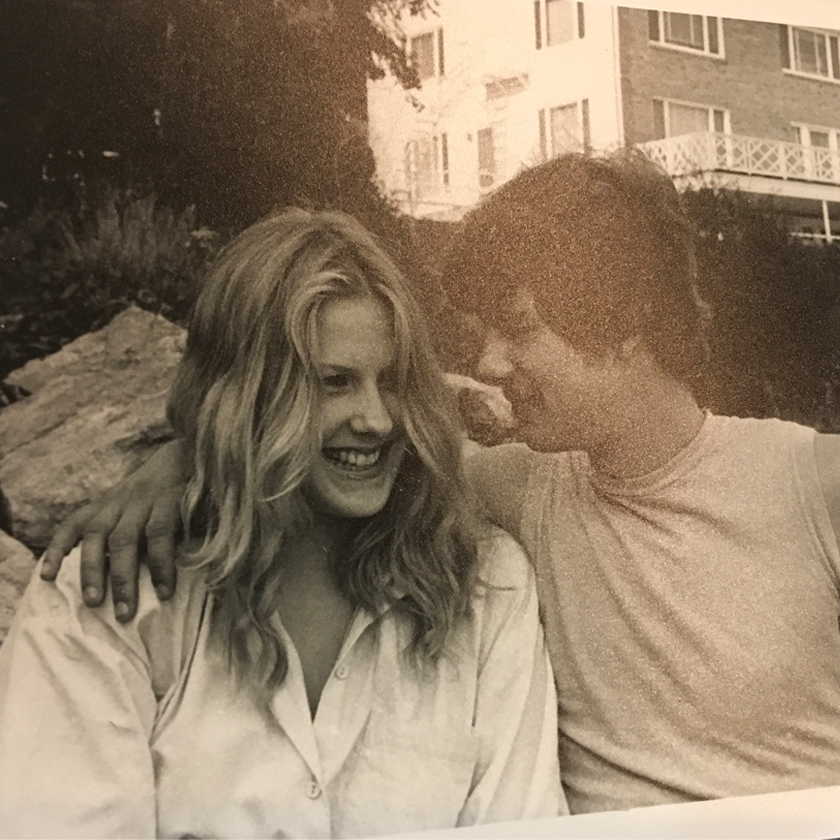 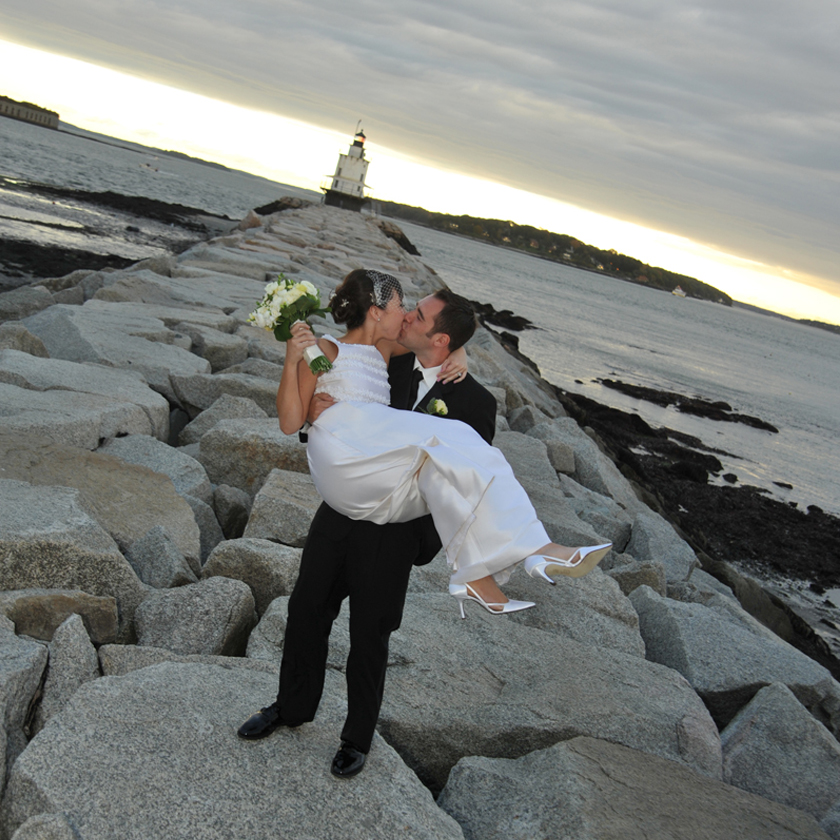 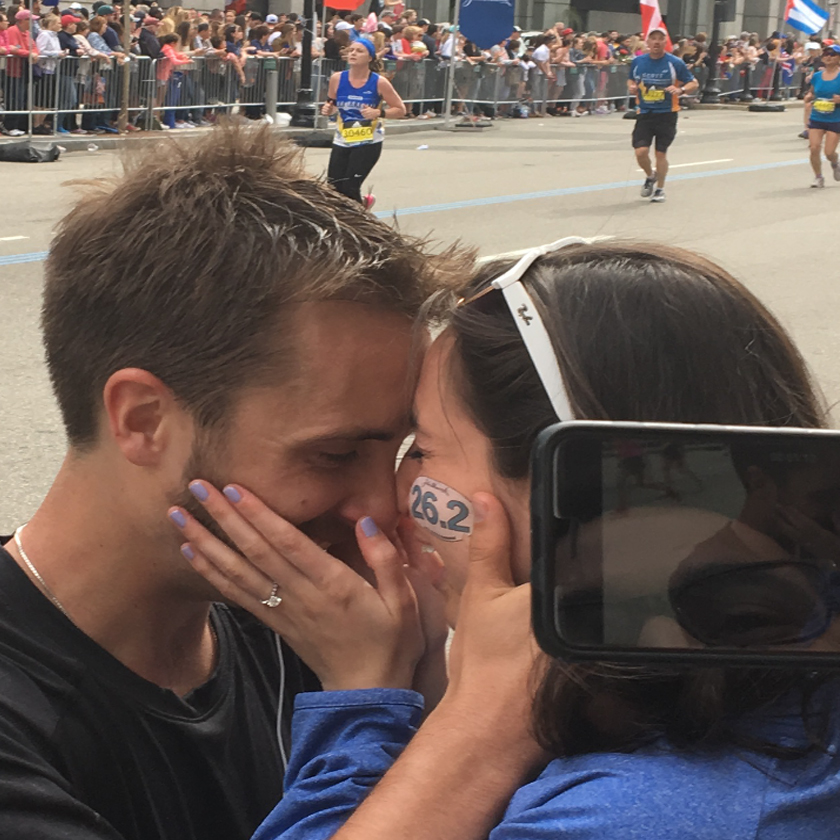 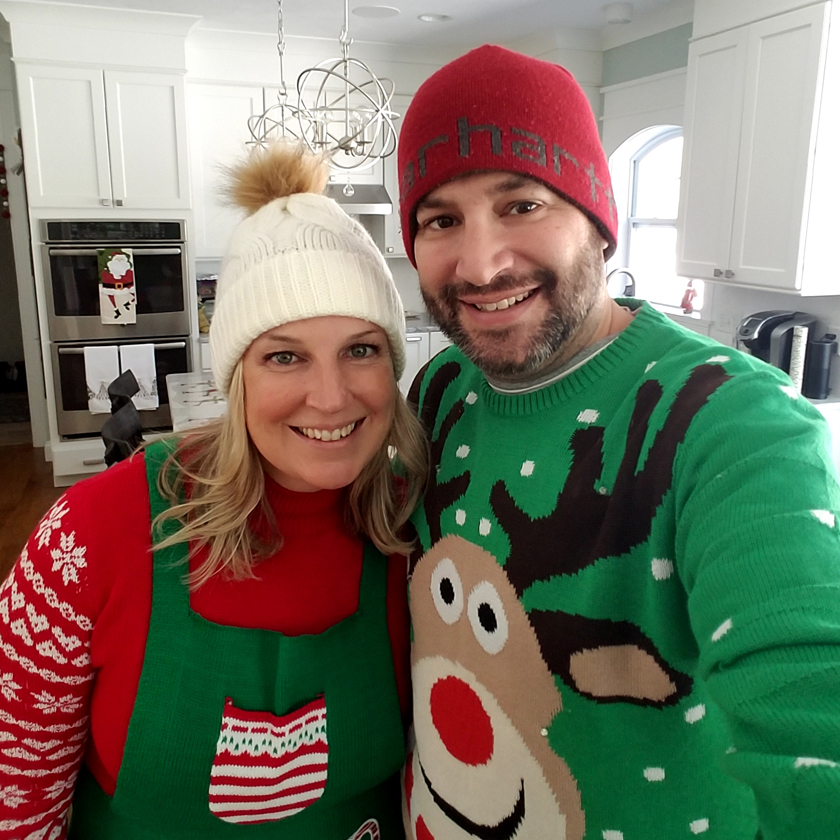 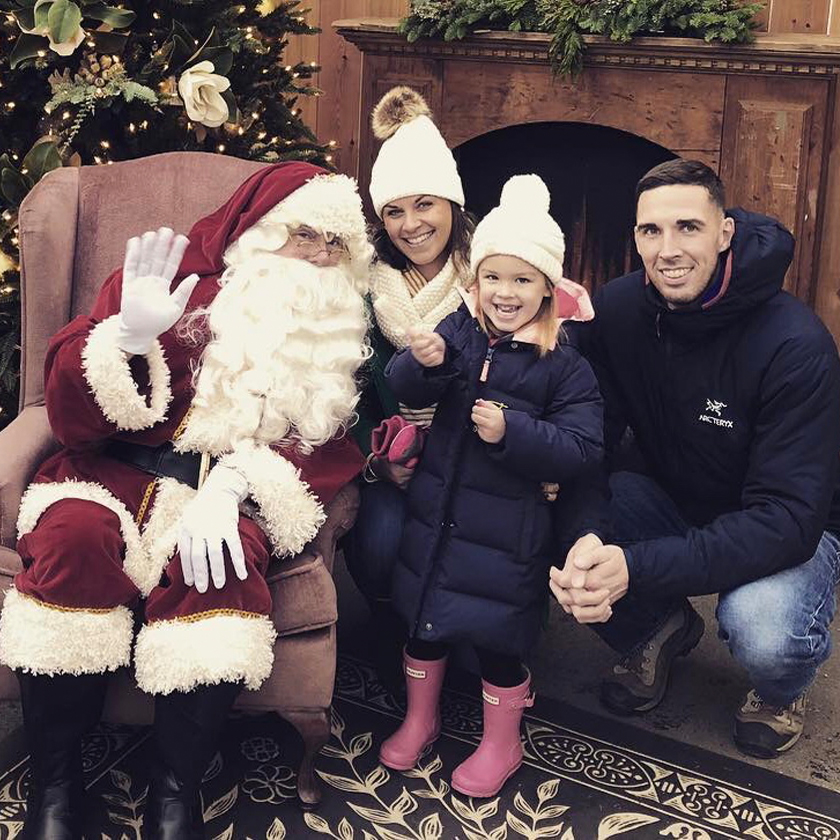 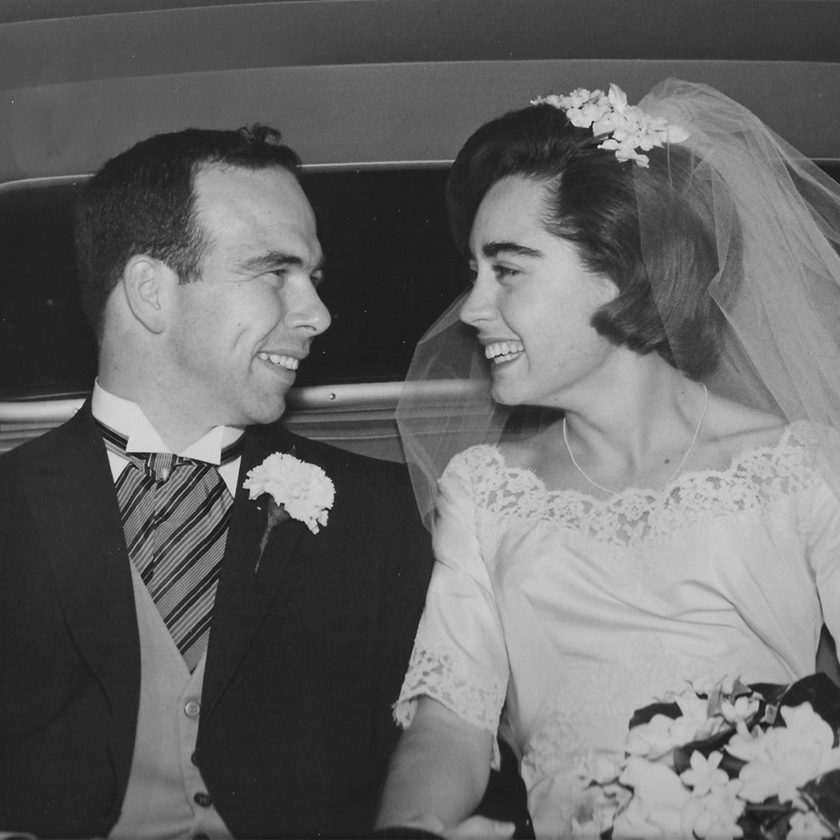 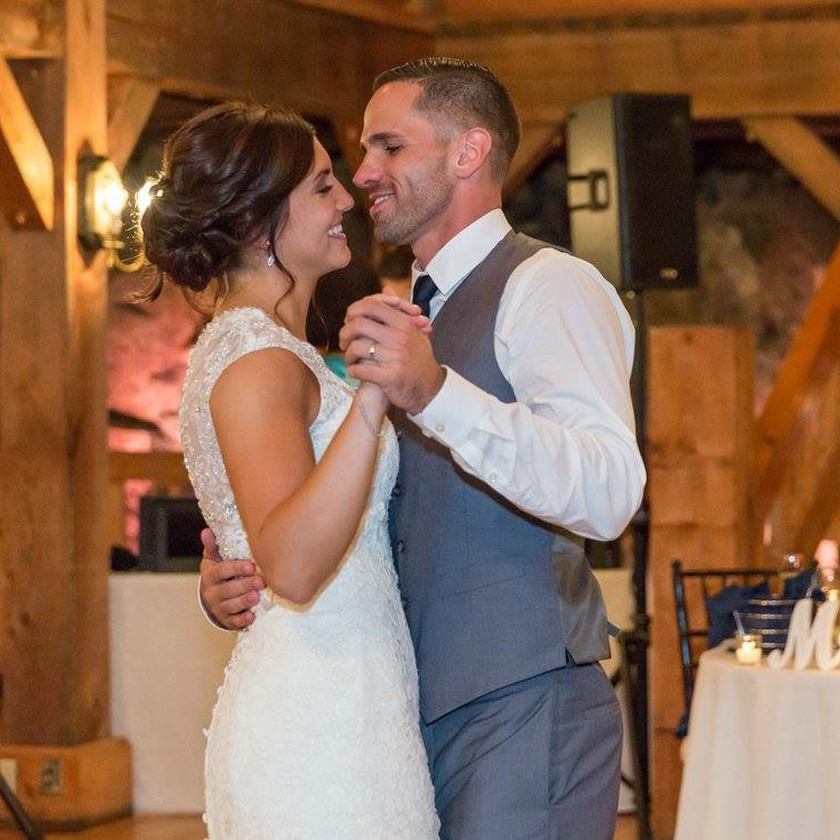