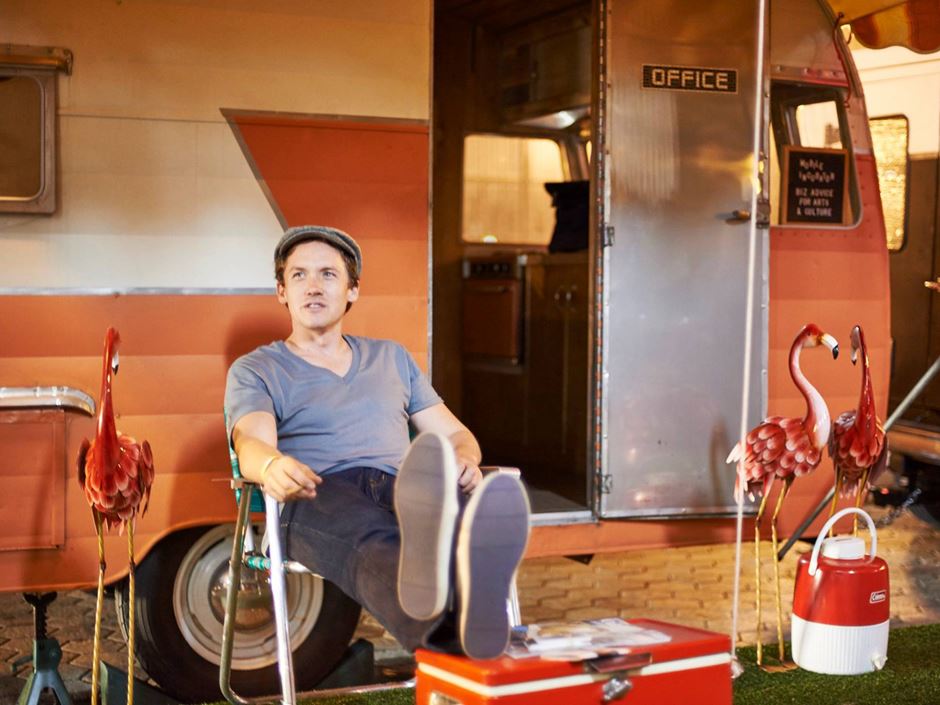 Alumnus Lucas Spivey is on a mission to help artists, all from the comfort of a 1957 Shasta camper.

When Lucas Spivey first discovered his 1957 Shasta camper in The Dalles, Ore., it was full of beehives and littered with bullet holes. But, it wasn’t the flaws that Spivey focused on, it was the potential.

The former Van Loan School at Endicott College graduate student utilized his years of creative experience and his Master of Business Administration in Finance (M’14) to create the Mobile Incubator. The original intent was for it to be a mobile office, but what it turned into is so much more than that.

As Spivey demonstrates, there are endless possibilities with an MBA, and the Endicott program was the perfect complement to his Bachelor of Fine Arts from the University of Washington.

After doing freelance work with artists and galleries, he made the switch to higher education and was the gallery manager at Montserrat College of Art. He then opened his own art gallery in Beverly, Mass., which was an important step in his decision to pursue an MBA.

“I started working in galleries because I wanted artists to have more opportunities, and that’s why I started my own gallery,” he said. “I just wanted to help artists. What I realized is that the exhibitions were really great for them, but often what was most helpful for them was sitting down and talking about their goals and what they wanted to accomplish in their career. They were able to figure out the gallery system eventually, but they really had a hard time putting together a plan for themselves professionally.”

That’s exactly why he turned his full-time professional focus to his consulting business, Services Invisible, and went back to school at Endicott.

“I wanted things that I could put into practice immediately.”

That’s what he spent most of his summer and fall doing with his Mobile Incubator in Boston at the Boston Center for the Arts and Zone 3, a Harvard University initiative in Allston.

Spivey met roughly a thousand people during the two stops, many of whom waited in lines to see what the Mobile Incubator offered. He also ventured into new ways to provide art business education through workshops and podcast interviews with successful artists, including “Project Runway” winner Erin Robertson and comedian Alingon Mitra.

“I started recording interviews so I could take that conversation with a successful artist and have any artist in the country tune in and get that same help,” Spivey said.

As of the beginning of November 2017, the Mobile Incubator was up to roughly 19,000 miles as Spivey’s 1973 Canadian ambulance towed it toward Florida for the Art in Odd Places festival in Orlando, Ringling College in Sarasota, and Art Basel in Miami.