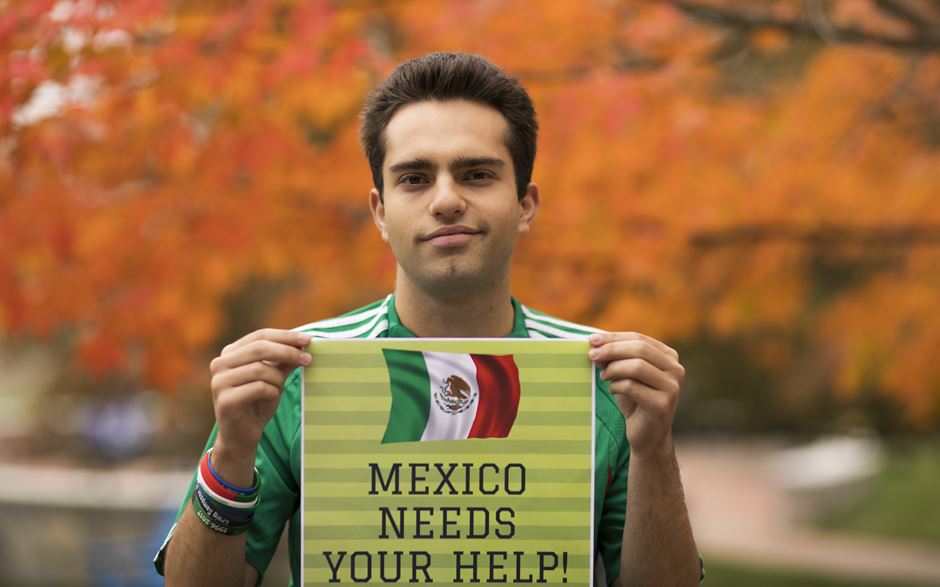 For Eddy Kreimerman, Class of 2020 President and hospitality student, Fuerza Mexico means being able to help.

Fuerza Mexico. It was the phrase that flooded social media beginning on September 19, 2017. After an earthquake devastated Mexico City, this message of hope was shared millions of times on social media, and is still being shared, to raise awareness for earthquake relief efforts. Fuerza Mexico, translates to Mexico strong, but for Eddy Kreimerman Meyohas, Fuerza Mexico means being able to help. That’s because, for Eddy, Mexico City is home. In fact, living on Endicott’s campus is the first time in his entire life that he’s lived outside of Mexico City.

Kreimerman, a sophomore hospitality student and Class of 2020 class president, was in class when the earthquake struck. Thankfully, his family and friends were unharmed by the disaster, but that need to help kept nagging at him. He spoke with a friend in Mexico who spent that entire day biking around the city delivering medical supplies to everyone in need. “I felt like I was not able to help in that way,” Kreimerman says, “I thought, what can I do to help from where I am?”

He explains, “There’s so much going on, so many natural disasters, and so many other things happening in the world. It’s hard to spread a message, especially to a college student population.” He decided to sell bracelets, “The bracelets got the message across of what was happening and what the impact was,” he says.

Charging forward with this idea, he collaborated with the Student Activities office, the Community Service office, and the Office of International Education. The goal was simple: to help the cause and spread the message of Fuerza Mexico around campus—and beyond.

When Kreimerman announced his fundraiser at a class meeting, Dr. Wylie was quick to pledge to match the amount raised. “That was amazing to me,” says Kreimerman, “Where else does a College president say he’ll match the fundraising proceeds of a student?”

Kreimerman sold his bracelets, which are branded #Fuerza Mexico across the band, for three dollars each. The proceeds benefiting Mexico hurricane relief efforts, but Kreimerman says most of his proceeds didn’t even come from the bracelets themselves. Many people made donations that well exceeded the three-dollar price tag. “The support I got was unbelievable,” he says.

Seeing how the Endicott community reacted to his fundraising, he says, has been one of the best parts of all of this. “It speaks to what Endicott is and what Endicott represents for me,” says Kreimerman.

This tight-knit community and environment where everyone knows your name, and everyone is willing to help, is the reason Kreimerman chose to come to Endicott. “I wanted somewhere where you could know everyone by name and everyone knew who you were,” he says. That has helped him in his fundraising efforts. “They were so generous because they were trying to help Mexico, but many people told me that they donated because they knew that I was personally affected saying that they wanted to help my country and my family.”

Kreimerman raised $1675 in proceeds making for a total of $3350, with Dr. Wylie’s matching contribution, to be donated to the Cadena Foundation. This non-profit organization is committed to helping people affected by natural disasters around the world. Kreimerman hopes that these funds make an immediate impact and help to rebuild the schools and homes that were lost by so many in Mexico.

“It’s rewarding and gratifying the fact that I could find a way to help from far away,” Kreimerman says, “I really want to emphasize how thankful I am to everyone at Endicott. It means a lot how everyone came together to help Mexico.” Kreimerman hopes that others understand the importance of giving back. He says, “Anything helps, any effort, even if it’s not money. Just giving your time and spreading the word is very important. There will always be someone in need of help.”