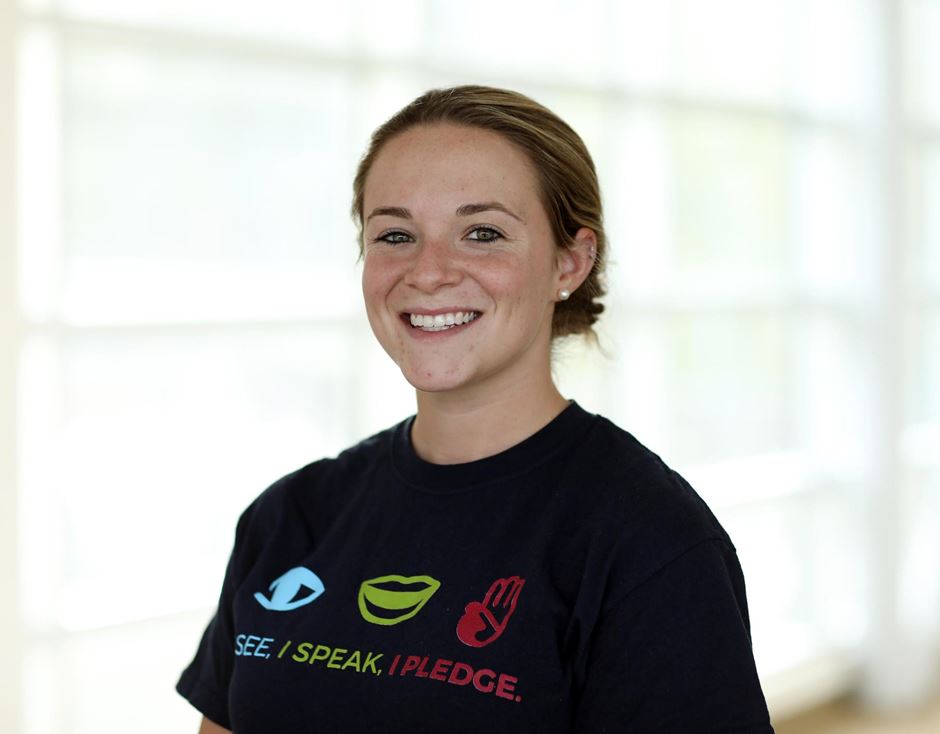 Lindsee Allienello and REACH Peer Education launch the Gull Guide as part of bystander awareness campaign to promote looking out for one another on campus.

At Endicott, we see, we speak, and we pledge, because that’s the right thing to do. We take that seriously. The College’s bystander intervention campaign, I See, I Speak, I Pledge, spreads the message that individual students have the power to prevent high risk behavior and harm. And it’s changing the way we talk about issues like sexual assault, suicide, alcohol abuse, drug abuse, and discrimination. The campaign’s message of helping one another has infused itself into the Endicott culture and, last spring, it was what earned the College The Prevention Excellence Award from the Campus Prevention Network (CPN) Summit.

For Allienello, a full-time graduate student, student athlete, residence life graduate assistant, and resident assistant, activist is just another addition to her repertoire. Her idea has turned into a new college-wide initiative called Gull Guide. The goal is to encourage a sober buddy system designed to recognize and reward students for stepping up for friends and peers who may need help. The initiative, in collaboration with the I See, I Speak, I Pledge campaign, aims to encourage individuals to help their friends have a night they want to remember opposed to one that they want to forget.

The New England Patriots partnership with the HERO Campaign recognizes and rewards fans who pledge to stay sober and be a safe ride home from the game for friends and family. That’s what sparked Allienello’s idea to bring this kind of initiative to Endicott.

Like the HERO campaign, the Gull Guide initiative encourages students to pledge and step up to be a sober chaperone to their peers. Being a Gull Guide means making sure friends aren’t drinking too much, not sending a text they shouldn’t be sending, not going home with someone they shouldn’t be going home with. Allienello explains, “It’s all things, it’s making sure people are being safe, being healthy, but also having fun at the same time.”

“People think that if you don’t go out and drink then there’s nothing to do or that it’s looked down upon. That is not the case at all.” Allienello says, “This is another way of showing people that they still can go out with their friends and it’s totally fine to not drink. You should be recognized for stepping up for being there for your friends and one another. “

After meeting with Lindsey Shrayer, advisor of REACH Peer Education and assistant director of the counseling center, and Tacy Cresson and Craig Smith, both coordinators in REACH focusing on alcohol and drug awareness programs, Allienello began rolling out the idea to upper classmen and student athletes. They were receptive, engaged, and many have already pledged. With 54 people pledging on the very first day she launched the idea on campus and 70 pledges by the end of her first week alone, the momentum is continuing to build.

“People were saying they absolutely wanted to participate or that they already do this, so, it’s nice to get recognition for it,” says Allienello.

Shrayer is thrilled at what she has seen take place. “I am so proud of Lindsee’s hard work and dedication in taking an idea, collaborating with REACH, and spearheading this initiative with the I See, I Speak, I Pledge campaign. We want to make sure that even after Lindsee leaves Endicott, there are other students excited and motivated to encourage and empower peers to look out for one another.” Shrayer explains, “We want this to truly become part of the language and narrative as to how we as Endicott Gulls support one another.”

Her drive to disrupt the status quo comes from her own personal tie to this issue. In her freshman year, she received a call from one of her friends who told her that one of their friends from high school had passed away in a car accident. Alcohol was involved. She says she can’t help but think, “Maybe that could have been prevented, if someone had stood up.”

She continues to work to roll out this initiative and plans to reach out to the healthy living residence halls so that those who choose healthy living have an opportunity to be recognized for their choice through being a Gull Guide, too.

Keep an ear out for students talking about being a Gull Guide. Allienello has already caught some students referencing Gull Guide and she was extremely excited to hear that the phrase is sticking.

She hopes being a Gull Guide, “happens now and years from now.” She says, “I want this to be my legacy that I leave behind but I really want it to be carried on after I leave here.”

Interested in pledging to be a Gull Guide? Want to know more about how to get involved? Be sure to follow REACH Peer Education on Facebook, Twitter, and Instagram for updates and future pledge tables. REACH also meets every Tuesday in LSB 130 at 7pm.