Endicott College was one of three institutions honored at the ninth annual Campus Prevention Network (CPN) Summit for its commitment to the highest standards in alcohol, drug and sexual assault prevention. The Prevention Excellence Award was presented to Endicott for its “I See, I Speak, I Pledge” bystander intervention campaign that promotes the idea that individual students have the power to prevent high-risk behavior and harm.

Endicott’s “I See, I Speak, I Pledge” initiative builds on the existing expertise of the College’s campus centers and departments, and unifies them with consistent messaging and content. This means that while the issue or type of harm may vary, the promotion of intervention, the action steps, potential barriers and many resources will be consistent across issue areas. “I See, I Speak, I Pledge” launched last fall and was introduced to the community with a powerful video featuring students, faculty and staff. The video is now shown to all incoming students and is regularly shared on social media as a reminder for current students to say something, if they see something. Additionally, a training was held for all student athletes on bystander intervention, and magnets, posters, and door hangers were created for all rooms in residence halls. 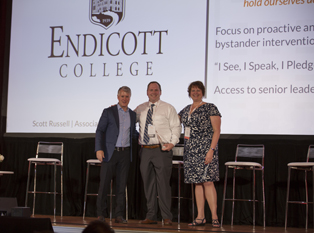 “The I See, I Speak, I Pledge Campaign reinforces the message that, from Freshman Orientation through Senior Week, as an Endicott Community, we watch out for one another and we take care of one another,” said Lindsey Shrayer, Assistant Director of the Counseling Center at Endicott College. “The goal of the initiative is that the reinforcement of bystander intervention will increase the odds of an Endicott student intervening to prevent harm, as well as create a culture of caring for each other’s well-being.”

Colleges and universities that have joined the CPN were eligible for consideration to receive the award through completing either the Sexual Assault Diagnostic Inventory (SADI) or the Alcohol Diagnostic Inventory (ADI) – comprehensive research-based assessments of a school’s prevention programs and practices. The three awardees – Endicott, University of Vermont and Villanova University – were selected based on their SADI and ADI scores, CPN staff interviews with campus professionals, and a careful review of each institution’s effort.

The CPN is a nationwide initiative of over 1,700 institutions dedicated to creating safer, healthier campus communities. Any college or university may join CPN free of charge by agreeing to take a pledge to adopt the highest standards of prevention related to critical health and safety challenges, including sexual assault and alcohol abuse, and to assess the progress and impact of their efforts.