After six weeks of competition, the Endicott Singers were named the winner of the ‘College’ category on the May 19th Season 3 finale of WGBH’s Sing That Thing!. Season 3 began with 18 amateur singing groups from across New England and only four were selected to advance to the finale – Endicott being one. Other finalists and category winners included the Rice Street Singers from Wellesley High School in the high school category, Crepusculum Choir from Berklee College of Music in the wild card category, and Sound Off in the adult category. Sound Off ultimately won the coaches over as the overall winner in the finale. 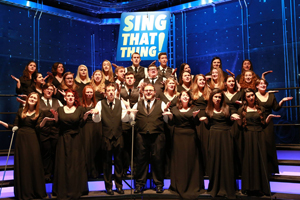 Season 3 Sing That Thing! coaches evaluated the groups based on a variety of criteria, including intonation and rhythm, as well as the complexity, versatility, stagecraft and audience appeal of their performance. The coaches included: Jared Bowen, WGBH News Executive Arts Editor; Annette Philip, award winning vocalist, composer, and faculty member at Berklee College of Music; and Anthony Trecek-King, president and artistic director of the Boston Children’s Chorus.

"Sing That Thing! was an experience that truly re-shaped us as a group," said Rebecca Kenneally, Chair, Performing Arts School of Visual and Performing Arts. "We learned to pay more attention to every detail, and that every single member's contribution makes a difference. The students came together as a team, and became more comfortable giving and receiving feedback. I know that the Endicott Singers are now at a higher level than ever before, not just in how they perform, but also in how they work. I can't wait to see where this will take them."

The Endicott Singers are a co-ed group of about 40 un-auditioned students pursuing majors in every area. The group rehearses for about two hours a week and participates in at least ten performances each year, singing classical, pop, a cappella, world, jazz and other styles. The Endicott Singers have performed with the Beantown Swing Orchestra, Symphony by the Sea, and the United States Air Force Band of Liberty. in 2017-18, the group will perform in a concert version of West Side Story with Symphony by the Sea, and participate in an exchange with a chorus from Stockholm, Sweden.

Over the course of seven episodes, Sing That Thing! viewers met groups specializing in a variety of genres from the world of vocal music, including a cappella, jazz, barbershop, Renaissance, pop and religious music. A live-to-tape finale featured the top groups from each category presenting their unique spin on a song of their choice.

“The constructive and expert advice from Anthony, Annette and Jared, as well as the diverse array of Sing That Thing! participants, has provided a community-focused showcase and a ‘master class’ for New England singers,” said Liz Cheng, WGBH’s general manager for television and co-executive producer of Sing That Thing! “WGBH has a strong history of supporting the arts. I’m thrilled that this program is a part of that heritage.”

The Sing That Thing! finale episode recently received two 2017 New England Emmy nominations. It was acknowledged in the Arts/Entertainment category and for Program Editor. More information about the series is available at SingThatThing.org.