On Thursday, March 30th at 6:00 p.m., Salem native and motivational speaker Sean Stellato will speak in the Wax Academic Center Auditorium at Endicott College. Stellato was a standout quarterback during his time at Salem High School and is currently an NFL sports agent, entrepreneur, and author of No Backing Down. 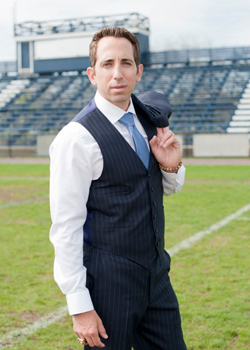 Fueled by the words “skinny kids don’t make it in a sport full of giants,” Stellato defied naysayers to clinch the starting quarterback position that would lead his team - the Salem Witches - to the Super Bowl in 1994. Stellato carried the valuable lessons he learned about perseverance and standing tall against adversity to guide him beyond high school to play both basketball and football at Marist College. After college, he took his talents pro and played several seasons in the Arena Football League.

His book, No Backing Down, chronicles the Witches’ journey to the Division 3 Super Bowl despite the off-field controversy involving a teacher’s strike and communicates the importance of never giving up and always putting forward your best effort. Stellato was inducted into the National Italian American Hall of Fame and the Salem High School Hall of Fame in 2013. In 2016, Stellato was named a Boston 40-under-40 honoree. As the founder of the All-American Fundamental Showcase, Stellato is working to pave a smoother path for the next generation of athletes by providing a skills tutorial for high school athletes looking to demonstrate their talent to local and national institutions.

As an NFL agent, Stellato has negotiated multi-million dollar player contracts for a host of stars; his current clients include Ryan Allen, Brandon King and Nate Ebner of the New England Patriots, Alfred Morris of the Dallas Cowboys, Ryan Delaire of the Carolina Panthers, Andrew DePaola of the San Francisco 49ers, Joe Vellano of the Atlanta Falcons, Kamu Grugier-Hill of the Philadelphia Eagles, and Tye Smith of the Washington Redskins.