On Thursday, February 16th at 6:00 p.m., Ndaba Mandela will speak in the Wax Academic Center Auditorium at Endicott College. Ndaba is the grandson of South African anti-apartheid revolutionary, politician and philanthropist Nelson Mandela. The legacy of Nelson Mandela lives on through Ndaba as he is showing the world, through his actions and lectures, that his grandfather’s voice and message of freedom still carries true. 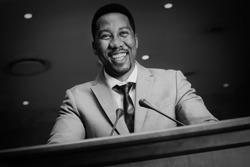 With his one-of-a-kind perspective and dynamic speaking style, Ndaba remains true to his inspiring grandfather’s message as he quotes, “I carry with me the values of my grandfather. I am an African, and I know what it means to be African, and I’m proud of it.” During his lectures, Ndaba engages his audience by inviting them inside the mind of “Mandela-the-man” when he cites his grandfather’s suggestions and stance on life, sharing advice he received as a boy which was often witty, and always invaluable. During his visit to Endicott, he will talk about meeting his iconic grandfather at age 11, the inspiring life lessons he learned while living with him in South Africa's Presidential Palace, and his efforts to perpetuate his grandfather's legacy.

Ndaba is the founder and chairman of the Africa Rising Foundation, a non-profit organization committed to publicizing the positive image of Africa to the world through publications, films, media and social interaction in order to change the mindset of young Africans. Through his work with the Foundation, Ndaba promotes economic development in Africa to instill and uplift a heightened sense of pride and purpose in young Africans to ignite a new African generation.