The Endicott Singers have been selected to compete on the third season of Sing That Thing!, a WGBH television program that showcases singing groups from all over New England in a friendly competition. The nationally-renowned series tapes this Friday, February 10th in front of a live studio audience. Invited New England-based singing groups perform and receive feedback from the three coaching judges. Endicott is competing in the College Category, along with Bates College, Worcester Polytechnic Institute, Emerson College, Harvard University and Berklee College of Music. 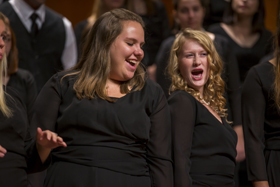 Mark Towner, Dean of Visual and Performing Arts at Endicott College, enthusiastically praised its own chorus, Endicott Singers, “I am proud and impressed that our chorus is participating in my favorite choral television program! And what better company could we have than the other colleges selected to participate?!”

The three Sing That Thing! coaches include: Jared Bowen, the WGBH News Executive Arts Editor; Annette Philip, an award winning vocalist, composer, and faculty member at Berklee College of Music; and Anthony Trecek-King, president and artistic director of the Boston Children’s Chorus. Together, the coaches provide constructive feedback to each group and determine which ones will advance to the next round.

Due to overwhelming popularity, seats to be a part of the audience for the Endicott Singers taping on Friday, February 10 from 5:15–8:30 p.m. have sold out. However, the public will have another opportunity to catch a live performance at the final competition, if they advance, on Thursday, February 16.

“Sing That Thing! has truly demonstrated the power of song to unite people from many backgrounds in creating transformative music,” said Liz Cheng, WGBH’s general manager for television and co-executive producer of Sing That Thing!. “This uplifting program has earned audiences of all ages throughout New England.”

Sing That Thing! premieres April 7th at 8:30 p.m. on WGBH 2. More information about the series is available at SingThatThing.org.