As an English major at San Diego State University (SDSU), Endicott College and nursing were not exactly in Mary Miner’s future plans. In fact, Miner’s main goal while enrolled at SDSU was to simply graduate. “I was never a great student, nor did I love school, so when I graduated in 1972 from SDSU I wouldn’t have guessed that my future would involve more time in the classroom.”

When looking at the pieces of Miner’s past, it’s clear how they all fit together to uncover a passion that she didn’t know she had – at a time when she thought she had it all figured out.

It was 1969, and Miner had just graduated from high school, as she packed her bags and boarded a flight to her first mission trip in Guatemala. While in Guatemala, she provided vaccines and medications – and also met her now husband. Miner had a real desire to learn from the people of Guatemala, which was fulfilling to her. The experience also opened her eyes to how different the field of medicine is in different parts of the world. In the United States, many take the convenience of accessing healthcare for granted and the experience in Guatemala showed her that basic healthcare knowledge, such as when to see a doctor or take medicine, severely lacks in other parts of the world.

“I really enjoyed the trip, but it didn’t spark the desire to work in the medical field – that didn’t come until years later.”

While inspired, Miner put the mission trip behind her and went off to college in California, earning a degree in English. Soon after graduation, she married her husband and moved to New England to start a family. With two beautiful children, she decided to put her career as a pre-school teacher and family planning counselor on hold. Little did she know, this life change is what would lead her to a newfound passion.

“By becoming a mother, I found myself passionate about helping other women in the childbirth process. I started to learn more about child birth and breastfeeding and became a Certified Child Birth Educator and an International Board Certified Lactation Consultant.”

This passion motivated Miner to go on her first Intercultural Nursing, Inc., (INI) trip to the Dominican Republic in January 1993. The focus of the INI trip was to provide nursing care and health education to the underdeveloped neighborhoods within the country. 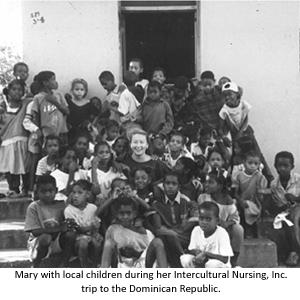 Miner’s primary role on the trip was to provide health talks to female health promoters and village women who might not have this type of opportunity to learn about giving birth to their child, taking care of their child after birth, and breastfeeding – topics that are easily accessible in the United States. She worked with a translator to give talks.  This role would otherwise make her the ‘educator’ to these women, who would in turn, share their knowledge with those in the most rural areas. Miner also had the opportunity to take part in the pharmacy filling the nurse’s requests for vitamins and other medications, among many other needed tasks, while she was there.

Her time in the Dominican resurfaced a very similar sense of fulfillment to that of her Guatemala trip back in high school. Upon her return, Miner knew that her desire to help people was stronger than it had ever been and the thought of going back to school to become a nurse became a real possibility.

Before she took the leap, she needed one more international trip to confirm that this passion, was in fact, a passion. After another trip to the Dominican Republic with a different organization, Medical Group Missions, it became clear that this was her calling and she needed to go back to school to receive her nursing degree.

After searching throughout Massachusetts and New Hampshire to find a college that would accept her credits from SDSU and offer a schedule accommodating enough to a lifestyle with two teenagers, she soon came upon Endicott College.

“The faculty and staff were so warm and welcoming to me. I thought for sure it would be very difficult to obtain my nursing degree as a non-traditional student, coming back to college more than 15 years after I graduated, but Endicott made the transition very easy for me to fulfill my dream of becoming a nurse.” 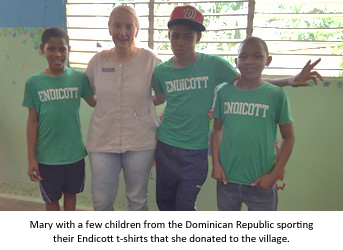 By September 1993 – just nine months after her initial trip to the Dominican Republic – Miner was enrolled in Endicott’s nursing program. “It was like all of the right doors were opening for me to make this dream a reality, and Endicott College was the very first door that lead to many, many others.”

The 8 a.m. to 3 p.m. schedule allowed her to be with her kids in the morning before she went to class, and at night when they got home from school. It took a lot of hard work and dedication (not to mention a supportive family at home), but by May of 1995 she was graduating with a nursing degree from Endicott College, and with honors to boot!

Endicott brought out a side of Miner that she didn’t know existed. “When I was an undergrad student in California, I couldn’t get out of school fast enough, but at Endicott I loved to learn. My professors and mentors made it exciting and challenging. I no longer feared the classroom – I couldn’t get enough of it!”

The tough days for Miner weren’t so bad, either. “When I had a crazy day of studying, or when I’d had a difficult day in clinical, I would head down to the ocean to clear my head. It was relaxing and helped me refocus. The beautiful ocean was one of my favorite qualities about Endicott.”

After graduating from Endicott, Miner worked as a part-time school nurse at The Governor’s Academy in Byfield, Mass. and continued to go on the international trips with the INI every January. The part-time role – and the fact that her kids were students at the school – allowed Miner to stay very active with the INI. In 1995, shortly after graduation, she became the President of Intercultural Nursing, Inc., a 100 percent volunteer position, continuing to go on the trips and plan them three to four times a year for others. 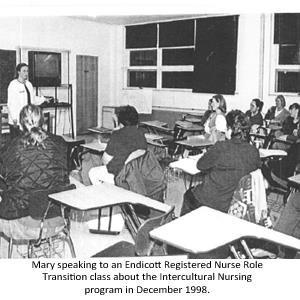 While Miner was busy growing in her career, she still maintained a strong relationship with her alma mater. Endicott was generous enough to provide discounted (or sometimes free) event space for the INI volunteers. Being a non-profit organization that did not have a very large budget, this allowed the nurses to get their continuing education units (CEUs) at an affordable cost. She also formed a relationship after graduation with Johanna Keefe, through Healing Touch Program, adjunct professor of nursing at the College, as well as Rita Severinghaus, who formally oversaw the international to the Dominican Republic trip in January of 2015 that nursing students attended over winter break.

Miner learned through her involvement with the INI, and through her education at Endicott, that providing health education to those that would otherwise not be able to receive it was something she loved to provide. She loved working with the women before, during, and after childbirth. A lot of the mothers she worked with internationally were very appreciative of having someone come and teach in a manner that respects them, and she felt pride in helping them have a happy, rewarding experience through motherhood.

Miner has won numerous awards for her work within the field of nursing, and in 2014 transferred her Sigma Theta Tau International, membership to the Endicott Chapter, Chi Epsilon. While Sigma Theta Tau was not established during her time at Endicott, she’s happy to be a part of the Honor Society of Nursing later in life.

In Miner’s free time she remains active and passionate about the field of nursing, continuing to learn by attending seminars and conferences throughout the area with a new focus on Holistic Nursing and Healing Touch Program and Healing Touch Spiritual Ministry. She’s commissioned through her church as a missionary, St. James Episcopal, in Groveland, Mass. and serves on their mission committee. She also serves on the Board of Trustees at The Charlotte Home Foundation in North Andover, Mass. Miner has continued to maintain a close relationship with Endicott, supporting the College in many ways throughout the years.

“I’m passionate about giving back to Endicott College. Nursing has made such a difference in my life, so I want to help someone else experience that same joy that I feel in the profession.”

Miner’s advice for students who are considering returning to school as an adult student? “Follow your heart, because when you do, doors will open. Doors that probably wouldn’t have opened otherwise. And when you follow your heart, you’ll make a difference in the world because you’re passionate. This pertains to any profession.”