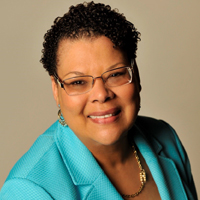 On Tuesday, February 7th at 6:00 p.m., Reverend Vivian Nixon will speak in the Rose Performance Hall at Endicott College. Nixon is the Executive Director of the College and Community Fellowship (CCF), an innovative organization committed to removing individual and structural barriers to higher education for women with criminal record histories and their families. As a formerly incarcerated woman and prior CCF program participant, Reverend Nixon is uniquely positioned to lead the charge to help justice-involved women and their families have a better future.

While incarcerated, Nixon spent time as a peer educator for the adult basic education program at Albion State Correctional Facility in New York. Following her release, she was ordained by the African Methodist Episcopal Church (AMEC) and currently serves as an associate minister at Mt. Zion AMEC in New York City. In 2003, while completing a Bachelor of Science degree in Human Services Administration at the State University of New York Empire College, she became the lead organizer for CCF. Since becoming the Executive Director of CCF in 2006, the number of program participants has grown exponentially, with more than 190 CCF participants earning college and graduate degrees, and fewer than two percent having subsequent criminal justice involvement.

Reverend Nixon is a Columbia University Community Scholar and a recipient of the John Jay Medal for Justice, the Ascend Fellowship at the Aspen Institute, the Soros Justice Fellowship, and the Petra Foundation Fellowship. She is a co-founder of the Education from the Inside Out Coalition (EIO), a collaborative effort to increase access to higher education for justice-involved students and serves on the advisory board of JustLeadershipUSA. Nixon holds a Bachelor of Science degree from the State University of New York Empire College.