We recently caught up with Endicott freshman Kylie Orszulak and her grandmother Jeanne Allen from the Class of 1957. While 59 years stand between Jeanne’s commencement and departure from Endicott, and the start of her granddaughter’s college career, it's obvious from speaking with them both that some things still remain the same! ​

Endicott has certainly changed since Jeanne was a student – including transitioning from a two-year, all women’s college to a four-year, co-educational college. Jeanne shared that she is envious of her granddaughter because she gets to spend four years here. Jeanne’s time at Endicott was as a very happy time in her life and that happiness still clearly radiates when she talks about her experience. Jeanne shared that when she was enrolled, she did everything she could to stay close to campus – especially during summer breaks when she worked as a nanny for a family in Manchester-by-the-Sea. 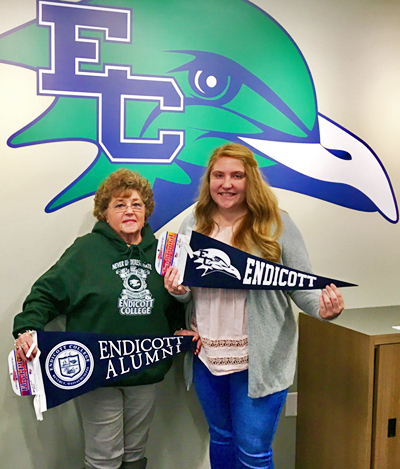 When asked what she misses most about Endicott? “The beaches!” While she majored in Preschool Education,​ Jeanne noted that tanning could have been her minor. Jeanne’s granddaughter Kylie not only followed in her grandmother’s footsteps by choosing Endicott, she is also pursuing a degree in education – only instead of preschool, she is majoring in Elementary Education with a focus on Special Education. Kylie shared that her grandmother’s success and passion in the classroom is what helped her decide on her own career path. Kylie was actually a student in the last preschool class that Jeanne taught before retirement.

Jeanne’s advice to current Endicott students and those who will be one day Gulls? “Stick to your academics and focus on what’s important. Enjoy the beauty of the campus and the people. You will become friends with people who will be in your life forever.” Although distance makes it difficult to see one another regularly, Jeanne and her college friends still maintain the same tight bond that started back in Winthrop Hall in the 50s. ​

We hope that Kylie can pass down her stories from Endicott, as well as Jeanne’s, in 59 years!