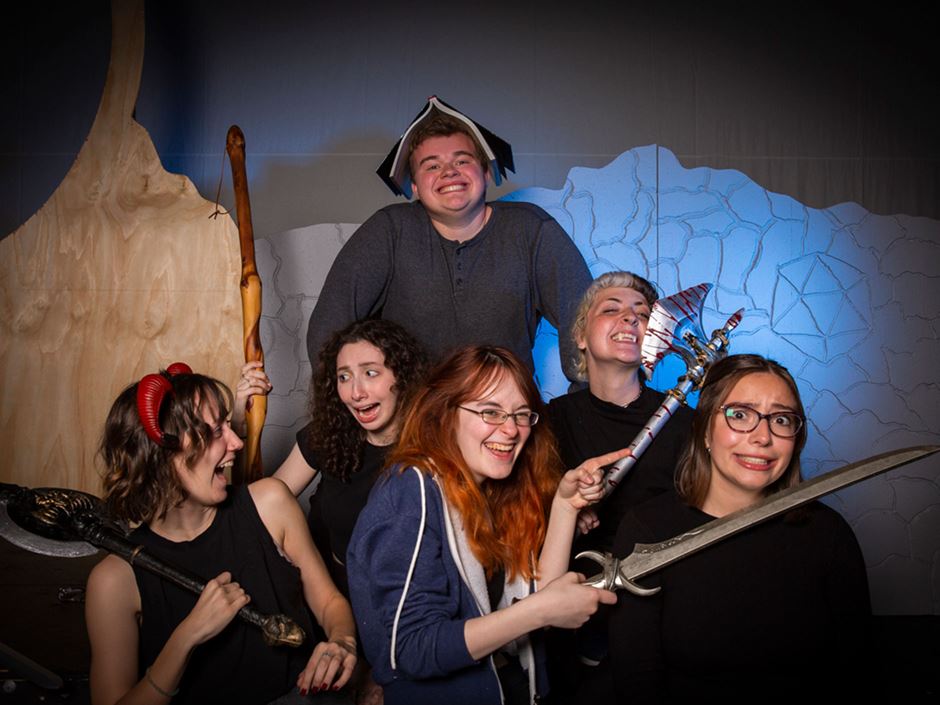 She Kills Monsters, opening November 3 at the Manninen Center for the Arts, uses the classic tabletop game Dungeons & Dragons to tell the story of Agnes Evans, a woman who loses her parents and sister in a car accident.
By: Erin Hatch

Grab your adventuring gear and get ready for a unique experience at Endicott’s fall production, opening November 3 at the Manninen Center for the Arts.

She Kills Monsters, a drama-comedy by Qui Nguyen, uses an imaginative premise—the classic tabletop game Dungeons & Dragons (D&D)—to tell the story of Agnes Evans, a woman who loses her parents and little sister Tilly in a car accident. Seeking to learn more about her sister, Agnes starts to play a Dungeons & Dragons module that Tilly had written, only to discover things she never imagined. 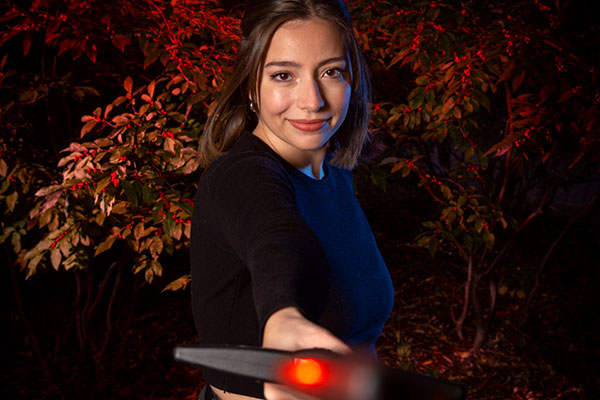 “This show deals with a lot of difficult themes in a fun and accepting way,” said sophomore environmental science major Faith DaSilva ’25, who plays Agnes. “There is LGBTQIAP+ representation and disability representation that is so important, and messages about acceptance. We also deal with a lot of themes like death and loss and love—my character is coming to terms with who she is, everything that she lost, and how to maintain the relationships that are still there after a tragedy.”

Director Katie Clarke-Robertson said the production speaks to anyone who’s ever felt like an outsider and advocates accepting ourselves for who we are.

“The show takes us back and forth between reality and the fantasy world of D&D and gives the ‘normal’ characters a chance to be magical,” she said. “In the fantasy world, there are no limits to who you can be, what you can do, and how you express yourself.”

Because the play takes place both in reality and in the imaginary game world, it presents some fun production challenges and opportunities.

Clarke-Robertson said extra thought went into staging, sets, and costumes because the playwright specified that there not be any blackouts for scene changes between the two worlds.

“They want everything to be fast-paced when going from an office to the fantasy world, so we’re trying to incorporate that into our costumes and characters so we recognize them in both,” she said. “We’re working to make the fantasy world really come to life, while the real world feels intimate and almost isolated—like a cage we’re stuck in.”

Something the whole cast and crew seem excited about is incorporating fighting and physicality into the play. In addition to a dance choreographer and an intimacy coordinator, the production brought in fight choreographers who worked with students in workshops and exercises.

“I’m looking forward to seeing the audience’s reactions to all the combat in this production—there is a lot and some of it involves most of the cast at the same time,” she said.

“They have already grown so much from when they first read the play,” they said. “Multiple students have told me that they are having so much fun exploring and playing in this mix of fantasy and reality.”

Pellizzari said her part in the play and the messages it carries have made the experience meaningful.

“I don't usually get to play characters I feel I can relate to on such a personal level, but I do feel a connection to Tilly and her struggles,” she said. “I tend to get lost a lot in fantasy worlds and games as a way to escape, much like how Tilly projects herself into her D&D world. I love that this show reflects on how this creativity and expression can be just as important and integral to a person as their real-world experiences.”

Randazza said that folks who aren’t familiar with D&D will still enjoy the production, even if the concept of the game seems a bit foreign.

“Our fight choreography is so cool, and the passion that all the actors have in telling this story is going to be amazing when the audience feels it,” they said. “I hope the audience will be able to take a sense of wonder and acceptance home with them as they follow Agnes and grow with her.”

Clarke-Robertson agreed. “My hope is that audiences can find themselves in some element of this story and that they feel seen, understood, and celebrated, whether or not they know anything about D&D.”

She Kills Monsters runs from November 3 through November 5. Purchase tickets.