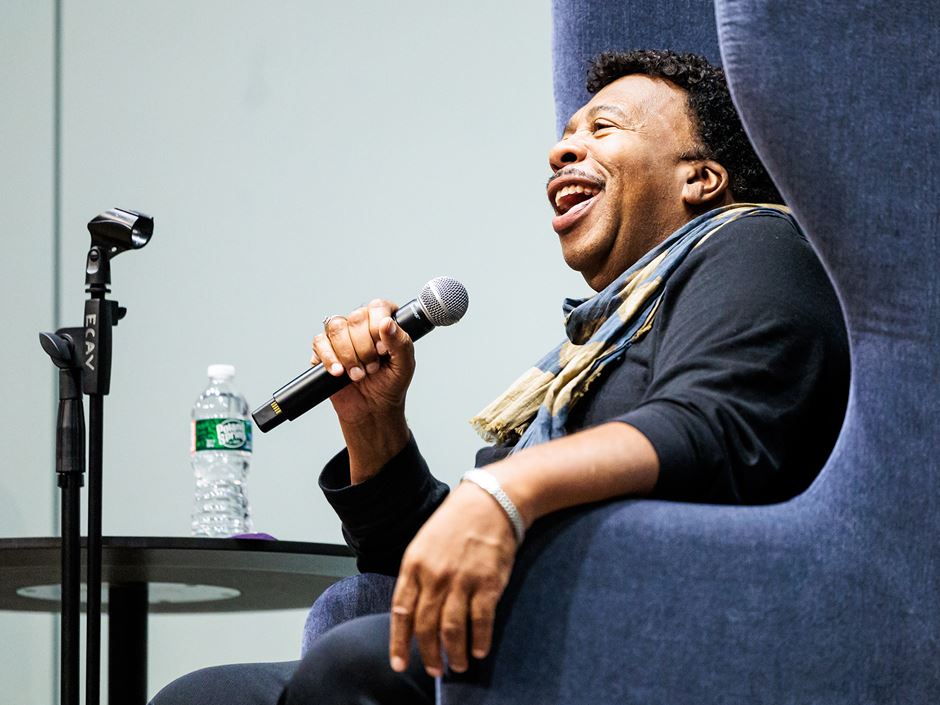 Leslie David Baker, known for his role as Stanley on the hit TV show The Office, came to Endicott to discuss his time on the show.
By: Madison Schulman

You might know Leslie David Baker as the disgruntled and pretzel-loving salesman Stanley Hudson from the popular TV show The Office.

On Thursday, the star came to Endicott’s Cleary Lecture Hall for Q&A and to talk about his time on the show. The event garnered around 250 students, who filled the auditorium to hear Baker’s answers to their pre-submitted questions.

Amid cheers, Baker was joined by moderator Daniel Ramirez, Endicott Admissions Counselor. Interestingly enough, Endicott has a connection to Dunder Mifflin Paper Co. in Assistant Professor of Business Allan Glass, who worked at Pennsylvania Paper Company (the company that inspired the The Office) for more than 20 years.


“You have changed my life in so many ways, because you still watch the show,” Baker told the crowd.

The actor first described his background before acting. Born on the Southside of Chicago, he graduated from Loyola University with a bachelor of science in applied psychology, working as a mental health therapist in psychiatric hospitals.

After working for the Board of Education in Chicago, he went on to receive a master’s in human services administration from the Spertus Institute for Jewish Learning and Leadership. Baker then worked for the Office of Cable and Communications in Chicago, as well as the Department of Public Health.

Six years after moving to Los Angeles, Baker got an audition for NBC’s The Office, based on the UK version. Previously, he had small appearances on That ’70s Show and Malcolm in the Middle.

Baker had another audition on the same day as The Office and decided to go to the other audition first. After getting stuck in traffic on the way back to his audition, Baker ran into The Office audition room disheveled—a look the casting directors happened to be seeking.

“I came tearing into the audition. The casting director said ‘Oh, thank you so much for waiting, Leslie, they said you were in the restaurant.’ I just said thank you,” he said.

On air from 2005 through 2013, The Office has become a classic that’s consistently syndicated on TV. Baker credits the characters’ idiosyncratic personalities with the show’s success.

He recalled how writer and producer Greg Daniels asked the cast to develop their own eccentricities for each character. For Baker, it became crosswords and pretzels.

“I was like, 'Stanley doesn’t really want to be here.' You could sit there and read a book, but you need something a little more active and passive-aggressive. Crossword puzzles,” he said.

Upon finding an old crossword puzzle in a drawer on set, Baker delivered his lines to Steve Carell’s character differently: doing the crossword while talking to him. He called Carell the “Medusa of comedy,” meaning it was hard to look him in the eye during a scene.


As for Stanley’s other character trait—pretzels and celebrating Pretzel Day—Baker said that pretzels are not his favorite food, alas. (It’s chocolate with nuts.)

Some of Baker’s favorite episodes and moments from the show include “Stairmageddon” (season nine, episode 19), which involves Dwight tranquilizing Stanley. Dwight rolls Stanley across the hall, sending him down the stairs covered in bubble wrap.

It was one of Baker’s favorite episodes and he said the bubble wrap he had to wear was very comfortable. He also loved when the show filmed carnival scenes in the parking lot with fake snow.

The finale of the series was an emotional episode to film, he noted. However, the cast was surprised by Carell’s return for the episode.

“That was our surprise,” said Baker, “we were very happy about that.”

Baker said that Kate Flannery (Meredith) is the least like her character on the show and that Rainn Wilson (Dwight) is most like his character.

When asked if he would play any other character on the show, Baker immediately said no.

“That’s been the most fun character of my career,” he concluded.