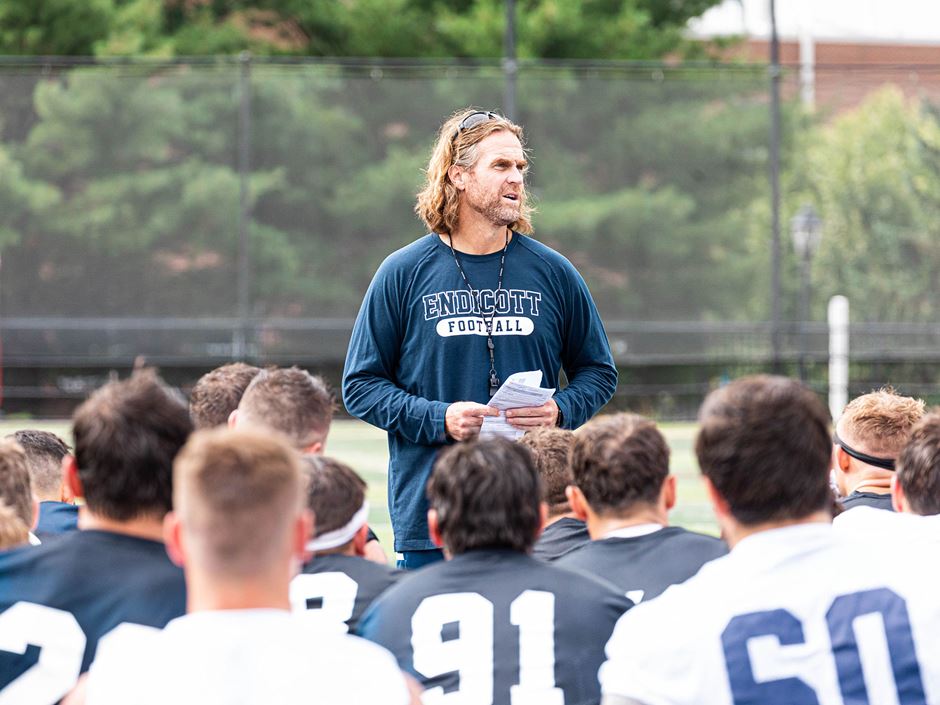 Growing up on a farm in Liberia, Hector Johnson learned about hard work from his grandmother.

“She instilled this rule we live by,” recalled the sophomore finance major. “She said, ‘A lazy man can’t eat.’” 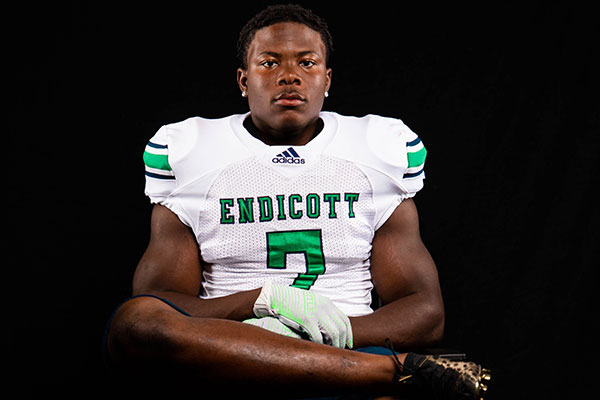 From the age of four until nine, when he relocated to the U.S. to be with his parents who were establishing careers in Worcester, Mass., Johnson earned his meals by helping his grandmother with all aspects of farm life.

“She knows how to do everything. She’s a woman with 30 different skills, it’s crazy,” he said. “She taught me a lot.”

Johnson’s grandmother also ran an orphanage for children whose parents were among the 50,000 killed in the Second Liberian War.

“That taught me a lot, too,” he said. “My grandmother taught us to build buildings and lay bricks … We used to grow corn, rice, all that stuff.”

While some people might balk at a child laying bricks, Johnson understands that his grandmother was trying to put him in a position to win.

“I thank her so much for making me who I am. She didn’t treat me like a baby. She was there to give me love and support, for sure, but at the same time, she told me, ‘Hey, you have to learn how to be a man.’”

These days, Johnson is bringing that work ethic to his role as a defensive end for the Gulls, where his lessons on the field echo his grandmother’s teachings. He is still learning how to be a man, only now it’s under the supervision of Football Head Coach Paul McGonagle.

At the start of the fall semester, McGonagle summoned Director of Belonging and Spiritual Life Gail Cantor and Vice President and Chief Diversity Officer Brandi Johnson to meet with the team about mental health, belonging, diversity, and beyond. For an aggressive sport fraught with injuries and, some would argue, a promoter of toxic masculinity—or the rigid adherence to traditional ideas of “manliness”—McGonagle’s job involves both coaching and parenting a team of more than 100 young men. (Notably, McGonagle has three teenage daughters.)

“The biggest thing for me is, did they leave the program better than when they got there?” he said. “I tell our players that if my phone rings for a reference, I’m not going to say you’re all-conference. I’m going to say, ‘Good person, on time.’ ‘Great young man, worked hard.’ It’s not about on the field, but if you’re a good person off the field—that you grew up. We, even the coaches, don’t represent football. We represent the College.”

Represent the College, indeed. Last year, McGonagle led the Gulls to a Commonwealth Coast Conference Championship win, followed by a first-round defeat against No. 18/20 nationally ranked Rensselaer Polytechnic Institute in the NCAA Tournament—the third NCAA Tournament appearance in program history and the first under McGonagle. 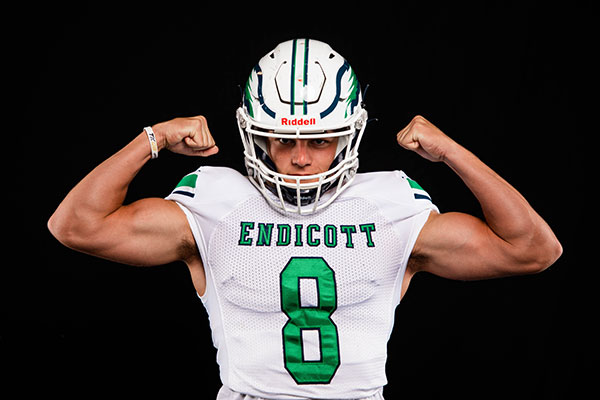 “The culture that Coach McGonagle and the older guys now have created—even through COVID—helped us build a bond that is unbreakable at this point,” said Shane Aylward, a junior wide receiver.

The exercise science major has no regrets about the NCAA loss. “You can’t go back and change a lot of things,” he said. “I think we did a lot of things the right way, and the things that shaped this team into a championship team we’re hoping to build on this year.”

Now, as the season heats up, the Gulls are looking to go the distance with dominating early wins against St. Lawrence University, Worcester Polytechnic Institute, the College of New Jersey, and Norwich.

Building a family on and off the field

McGonagle’s student-athletes live, eat, sleep, and breathe football. They’re a tight-knit family unit, too; where one student-athlete is seen strolling through campus, there’s likely four of five trailing behind.

But to cultivate that family dynamic at Endicott, McGonagle often calls on his student-athletes at random to recite the names of everyone on the team. During preseason, he rooms first-year students with seniors and forbids cell phone use at the Callahan and other places, instead asking his student-athletes to focus on the present, and each other.

Over the summer, McGonagle also added a familiar face to his roster with new Defensive Line Coach Mehdi Squalli ’21 M’23, a former linebacker for the Gulls. 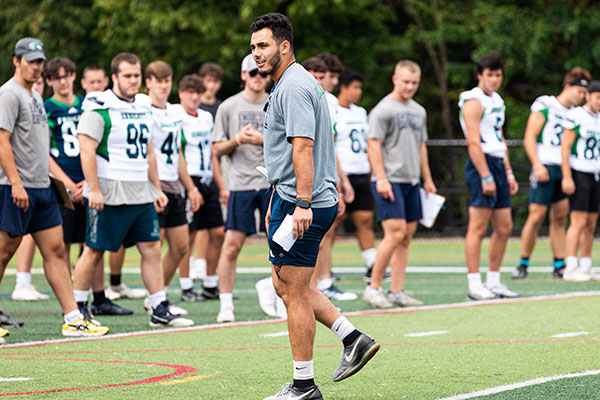 “I can go to [McGonagle] for anything,” said Squalli, whose coaching gig happened somewhat haphazardly.

During Senior Day, McGonagle was chatting with Squalli’s father and said his son might make a great coach someday.

“That’s what sparked my curiosity,” said Squalli. “Like, all right, let me ask Coach if I can be part of the staff next year or what opportunities may be available. He could’ve brought in anyone from anywhere, but I was lucky enough that he believed in me, and he trusts me. He knew what kind of person I was.”

McGonagle played football at the University of Kentucky and even now when he runs into former teammates, that family bond is instant.

“It feels like it was just the other day,” he said. “It’s that special bond of, hey, we made it through all those years—the 6 a.m. workouts, the games. It’s almost out of a movie.”

But whether in the movies or real life, it’s often the athletes who are dubbed jerks, a stigma Johnson is aware of.

“We don’t want that,” he said. “We want that we want people to look at us as leaders on this campus. We want to lead in the best way possible.” 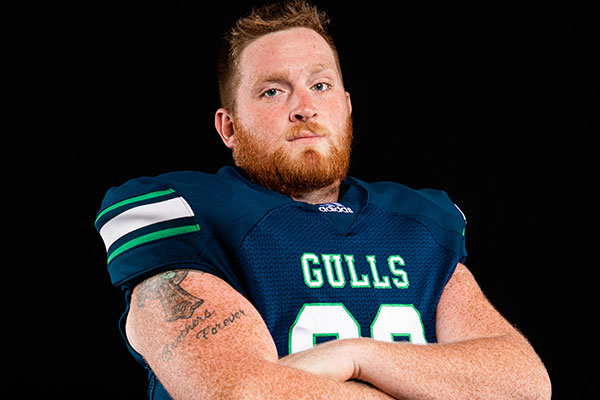 “Coach always says it’s football, but they’re also teaching us how to be a better human,” said Brendan Gill, a sophomore criminal justice major. “When you’re a football player, you obviously have more eyes on you, so you have to act like that.”

For Gill, it’s hard not to form “a family away from your family” when you spend hours together daily. “When people ask me, ‘Oh, how was your first year?’ I always say I walked into having 160 brothers the first day—don’t even skip a beat,” he said.

When sophomore defensive lineman Tucker Montague was diagnosed with cancer last year, the team didn’t see him for a while, but they never forgot him.

Then, during a scrimmage in Worcester over the summer, Montague not only surprised everyone in the locker room but announced he was cancer-free too.

“And the emotion in that locker room was unbelievable,” said Gill. “Again, that goes back to the whole brother thing. It’s your family member that just beat cancer.” 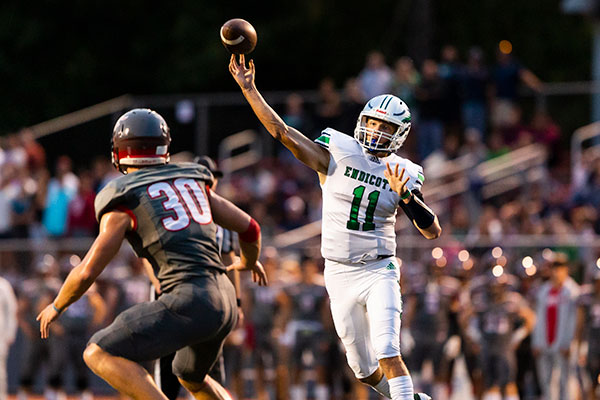 Life can be serious enough, and football—in just ten short games—is the best kind of reprieve.

“Friday night or Saturday, just seeing a bunch of people cheering for you … It’s the greatest feeling in the world, walking onto the field,” said junior quarterback Clayton Marengi.

Johnson agrees. “Every day, I look back and I just thank God all the time. I’m like, ‘Who would’ve known that I would be able to stay focused, stay the course, do the right things to make me be in the situation I am right now?’ I don’t take this for granted at all.”