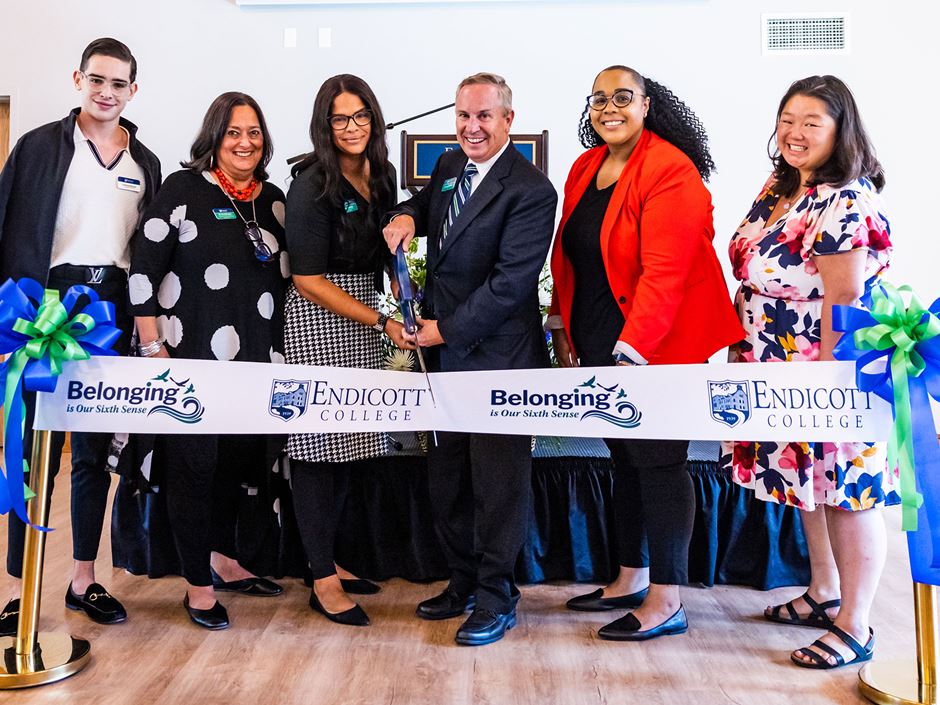 With a new academic year underway, a new era for diversity, equity, inclusion, and belonging is poised to transform Endicott.
By: Sarah Sweeney

With a new academic year underway, a new era for diversity, equity, inclusion, and belonging (DEIB) is also taking place at Endicott.

On September 7, the new Center for Belonging & Inclusion was unveiled at a ribbon-cutting ceremony that drew community members in droves to check out the freshly renovated center (once the Interfaith Chapel) and to celebrate the center’s sprawling mission to serve as the campus hub for inclusive programming and activities, as well as all things spiritual life.

“This is a day that’s been years in the making,” Brandi Johnson, Vice President and Chief Diversity Officer, told the crowd.

In her introduction of the new space, Johnson explained the building’s history as the Interfaith Chapel, which was established at Endicott in 1978 to serve as a beacon for students and community members of all religious beliefs.

“Today represents an expansion—not an eclipse—of that original mission, which is really about community,” she added.

Building on that idea of community is this year’s academic theme: “belonging is our sixth sense.”

“The new Center for Belonging & Inclusion will be the campus pillar that exalts that virtue not just this year, but every day going forward,” President Steven R. DiSalvo, Ph.D., told the crowd.

According to Rev. Dr. Gail Cantor, Endicott’s Director of Belonging and Spiritual Life, Johnson “started talking about belonging about a year ago, saying that it was the umbrella idea that encompasses diversity, equity, and inclusion. What we want to accomplish is the sense that everyone belongs. That’s the invitation for diversity to grow, for equity to be considered, and for inclusion to thrive.” 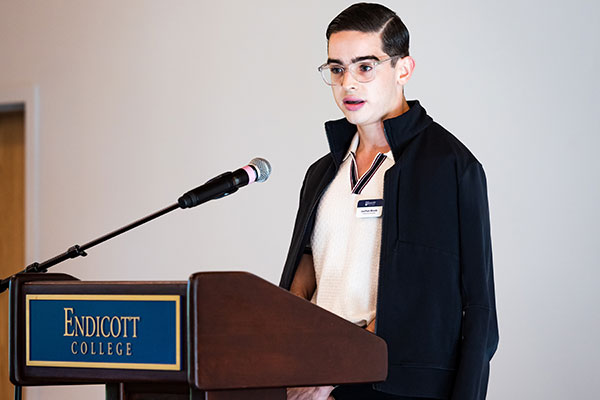 Throughout the year, the Endicott community will be asked to reflect on what belonging means, and enjoy more inclusive campus programming.

“As a member of the DEIB community, this center is a step in the right direction in making this campus a more inclusive environment for people like me,” said business management major JP Miranda ’23. “I see this as a new beginning in moving the needle on creating a sense of belonging within our community.”

A busy summer, and a spiritual pilgrimage

While renovations for the Center for Belonging & Inclusion were underway this summer, Johnson and Cantor relocated to temporary offices in the Samuel C. Wax Academic Center.

Even with their world in flux, the department’s work never slowed down.

Johnson and Cantor welcomed Anna Mei Gubbins, DEIB Program Coordinator, to the team over the summer; then, in August, Cantor and Gubbins traveled with four students to Chicago for the annual Interfaith America Summit, the largest gathering of students and educators with a commitment to American religious pluralism.

Exercise science major Eve Young ’25 said that during the retreat Patel shared his experiences with bringing people together create to a sense of belonging.

“His analogy for belonging was using a potluck where everyone brings their favorite dish and explains their pride behind it,” said Young. “Potlucks enable people to learn about other backgrounds while feeling proud to represent their own dish and its history. I think this is a fabulous way to bring people together because everyone has something special to contribute.”

The Center for Belonging & Inclusion’s debut dovetails with several high-profile campus events this fall, all sponsored by the Office for Diversity, Equity, Inclusion, & Belonging.

First up is the semester’s first Dine & Dialogue, which can be attended at breakfast or during a second lunch session on September 14. On October 4, disability speaker Christina Irene stops by the center for an insightful talk about invisible disabilities awareness; then, on October 19, former NFL quarterback Don McPherson, author of You Throw Like a Girl: The Blind Spot of Masculinity, will deliver a talk in the Cleary Lecture Hall.

On Nov. 9, Sean K. Ellis comes to the Cleary Lecture Hall for what is poised to be one of the center’s biggest events.

In 1995, Ellis was convicted for a robbery and murder that he did not commit, but spent 21 years, 7 months, and 29 days behind bars. His story was chronicled in the acclaimed 2020 Netflix documentary series Trial 4.

“Many people have worked hard over the years to amplify belonging on our campus and to make it a priority,” added Cantor. “Every year it gets louder and louder and now it seems to be front and center. I could not be happier.”

Learn more about DEIB on campus.