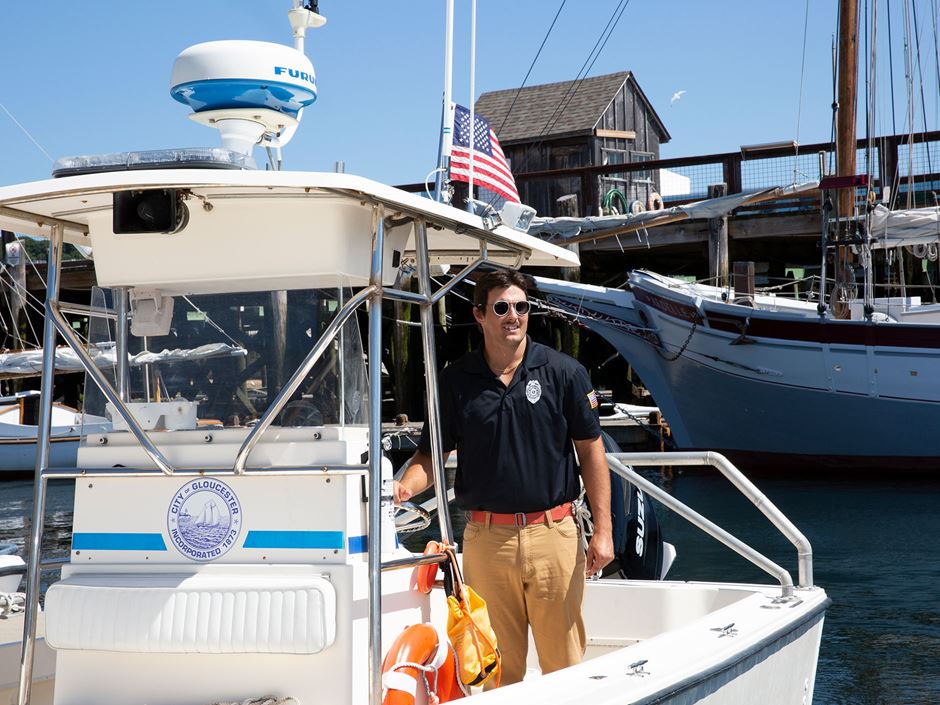 Through a summer internship with the Gloucester Harbormaster, Robbie Genaway ’23 is learning life lessons while saving lives.
By: Sarah Sweeney

Tuesday, July 12, started like any other workday for Robbie Genaway ’23.

He arrived at the Gloucester Harbormaster’s office that morning, as he’s done every day of his summer internship there, and “just went about my business,” he said. Cleaning boats, answering calls, monitoring the office’s docking reservation system.

Genaway usually gets lunch around noon, “but for whatever reason that day I didn’t,” he recalled. So, when the Gloucester Police Department phoned, he was at the ready.

“Only Chad [Johnson, Deputy Harbormaster] beat me to it,” said Genaway, a criminal justice major. “But I overhead a little bit—a husband had lost sight of his wife paddleboarding.”

Johnson rushed into the room, grabbed a bunch of radios, “tapped my shoulder and said, ‘Let’s go,’” said Genaway. “At Endicott, they want you to have internships with real-world experience and this was real.”

The two ran down the dock, hopped into a boat, and sped off, all while communicating with city officials to open the drawbridge as the duo navigated toward Coffins Beach across from Gloucester’s Annisquam neighborhood. 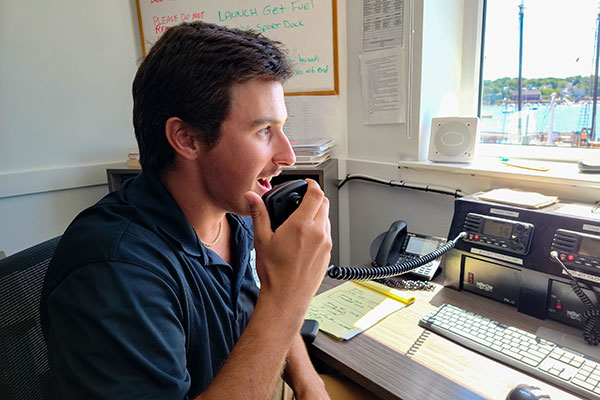 Genaway, who grew up around lakes in the Berkshires, can swim, but he does admittedly fear the open ocean. “Chad’s moving upriver and I’m holding on for dear life,” noted Genaway with a laugh.

While the Gloucester Harbormaster rarely ventures into the open ocean, Genaway and Johnson did that day—and did it in just nine minutes (it usually takes an hour).

“I’d never gone that fast. We were flying. I don’t know how fast we were going but it was exciting. So, we get out there and pass a sandbar and Chad slows down and, at that point, we start looking. It was really hard to tell how far out we were—but apparently, we were three miles offshore. There were 30-knot winds and the tide was going out—no one could paddle against that. There was a sense of urgency. Like, ‘We have to do this.’ I saw something neon and said to Chad, ‘Oh, is that her?’ Chad said no, that they were buoys. And then I looked over my shoulder for whatever reason and I saw the flash of a paddle and I was like, ‘Is that her?’”

It was—but after rescuing the paddleboarder, Johnson and Genaway had to next track down her son, who’d left the beach by paddleboard to go find her. Luckily, he was only a mile and a half offshore. Both were rescued without injuries and safely reunited with their family onshore. Crisis averted.

“It was exhilarating,” said Genaway, who received a blast of media attention after the rescue.

If Hollywood comes calling for the big screen adaptation, Genaway’s got the Top Gun aesthetic down pat—aviators, mustache, though he’s still working on the need for speed.

“You know, some days you don’t expect to be up and running,” he said. “I was just hoping we could find them. If we’d gotten there any later, I don’t know how far out she’d be.”

Thankfully, Genaway’s next post will be ocean-adjacent—he’ll spend the fall semester interning in the Gloucester Shellfish Department working with Shellfish Warden Peter Seminara.

And returning to the field as a defensive lineman for Endicott football.

Whether on the field or on the job, Genaway’s internship has imparted some life lessons he won’t soon forget: “Always be ready. You never know what’s going to happen.”