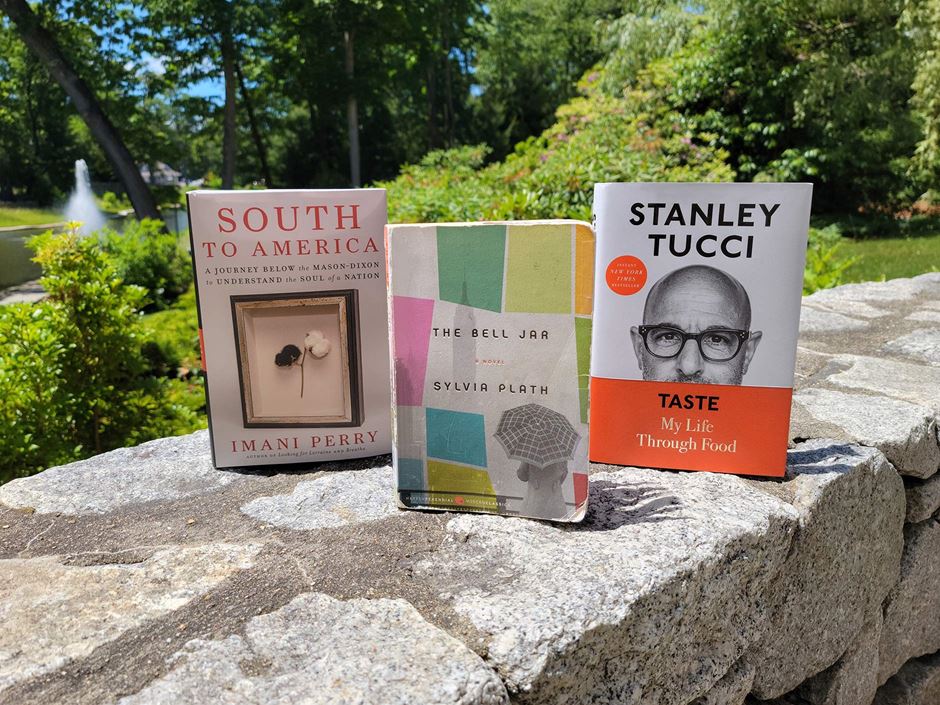 Looking for a good book this summer? We asked some of Endicott’s top faculty members to share what’s on their summer reading lists.

Looking for a good book this summer? We asked some of Endicott’s top faculty members to share what’s on their summer reading lists.

The first book I want to read is one I started in March, The Books of Jacob, by Olga Tokarczuk, the Nobel Prize winner for literature. Set in the eighteenth century, The Books of Jacob is almost 1000 pages long and is stuffed with so many characters and so many storylines that I can’t possibly explain what it’s about, but I can say that it is totally absorbing.

A vocal critic of the Polish government, Tokarczuk is famous for speaking out against its suppression of protest and its near-total ban on abortion. As a result, she is a highly controversial figure in Poland. There is even a movement to ban her books despite her international renown. Now that her books are available in English (translated by the amazing Jennifer Croft), I hope that more people will read her work.

Next on my list is another long novel, The Love Songs of W.E.B. Du Bois by Honorée Fanonne Jeffers. Like The Books of Jacob, Jeffers’ book has many different storylines and characters. I am interested in it because Jeffers says that her goal is to breathe life into Black American history.

Finally, I want to read How Beautiful We Were by Imbolo Mbue, in part because I loved her first novel, Behold the Dreamers, and also because I’m hoping to persuade her to speak at Endicott next year.

I teach early American literature, a course that ends in 1865, and so it might seem puzzling that I want to read so much contemporary fiction, and international fiction at that. Shouldn’t I spend my summer re-reading Whitman? But what all three authors share is an emphasis on how the past shapes the present and how understanding the legacy of injustice can change who we are today. I think it is important to read books that startle us and surprise us, that re-shape our worldview.

I’ve started reading My Morning Routine: How Successful People Start Every Day Inspired by Benjamin Spall and Michael Xander. I’m normally not one for “business self-help” books but I started getting up early, real early, a couple of months ago and felt like I needed a field guide—or a modicum of outside encouragement. Honestly, the title itself is way too wholesome and gimmicky, but I started listening to it on Blinkist and kept replaying bits and pieces. As a recovering night owl, I like it because the book surveys the morning habits of many people and people fascinate me, imperfections and all.

I’m also reading Taste: My Life Through Food by Stanley Tucci. If you like Tucci’s show on CNN, you’ll understand why this is a must-read. In my humble opinion, anyone who can pivot to eating their way across Italy, and get paid for it, that’s someone I’m interested in. There are travel shows and there are foodies and he elevates the idea behind both. After just a few dozen pages, its plain English has begun to satisfy my long-time obsession with Italy, its culture, and its people. It’s a simple read that I can’t put down.

Imani Perry was a speaker at Endicott through the Tadler Center in April. She was brilliant and amazing, and I can’t wait to read her book, South to America: A Journey Below the Mason-Dixon to Understand the Soul of a Nation.

Mini Farming: Self Sufficiency on 1/4 acre is just for fun as I’m starting my vegetable garden …

My fiction reads, which I have in my Libby app, include Jenniger Haigh’s new book Mercy Street about an abortion clinic employee in Boston. The other is Requiem for a Dream, which is preparation for an honors course I’m teaching in the fall titled, The Literature of the Opioid Crisis.

The Dead are Arising: The Life of Malcolm X by Les Payne and Tamara Payne: An important and insightful addition to the many biographies of Malcolm X.

The Bell Jar by Sylvia Plath: You can see the descriptions and details like a movie.

Paradise Salvage by John Fusco: A goofy and fun novel about growing up in Connecticut in the 1970s.

Walden by Henry David Thoreau: There is humor on every page. On the lyceum circuit, Thoreau had them rolling in the aisles. When students realize how funny he is, they get it. I reread it every summer.

The Making of a Radical: A Political Autobiography by Scott Nearing: The pacifist, economist, and vegetarian who, along with Helen Nearing, founded the back-to-the-land movement.