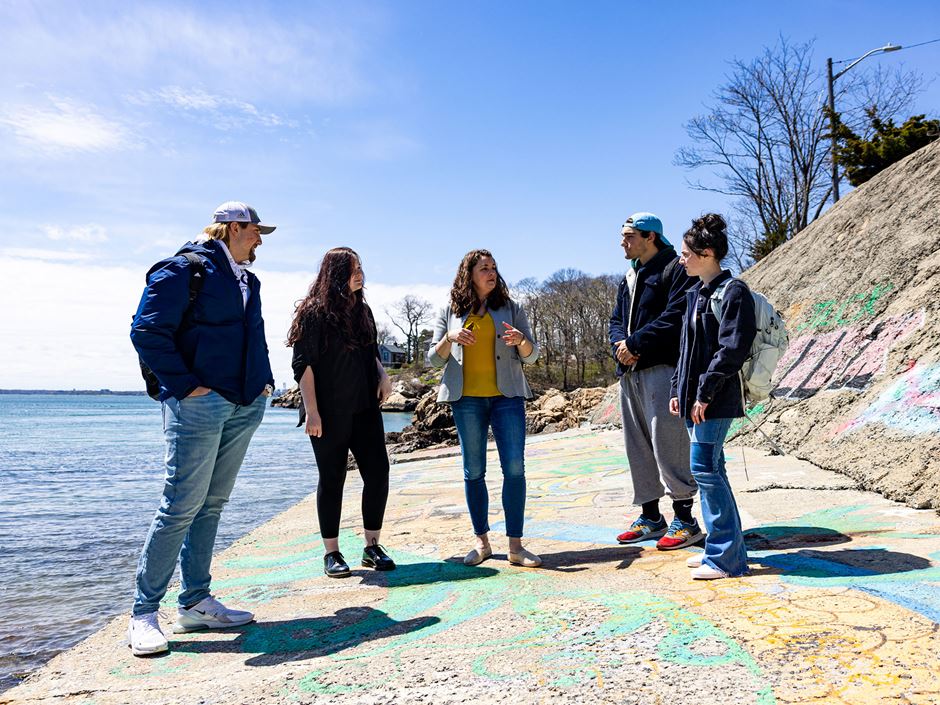 Associate Professor of History Elizabeth Matelski has been named the recipient of the inaugural Tadler Center Fellowship.

Matelski will research and write a book-length study about Robin Mingo, an enslaved man who lived in Beverly, Mass., from 1661 to 1748, and whose name is known to the Endicott community through the College’s own Mingo Beach. The grant is sponsored by the Tadler Center for the Humanities.

During the fellowship, Matelski will explore the legend that Mingo had been promised his freedom if the ocean tides lowered enough for him to safely walk from the shoreline out to what is currently named “Black Rock.”

“I suspect that the Mingo myth was born out of the Beverly abolition movement in the early 1800s but, at this early stage, it is only an educated guess,” Matelski said, adding that “no similar space in Beverly (or the North Shore at all) is named after an enslaved person. How did this beach come to carry its former resident’s name?”

This spring, Matelski tasked students in her Public History course with imagining a public history exhibit recognizing both Robin Mingo and Mingo Beach. The students are currently in the process of submitting a hypothetical grant proposal to the National Endowment for the Humanities.

“Liz is dedicated to uncovering stories that have gone untold,” said Distinguished Professor of Humanities and Tadler Center Director Charlotte Gordon. “Much of her work is about reframing the narratives surrounding our country’s history by placing the life stories and experiences of women, working-class people, and people of color at the forefront. In the case of her work on Mingo Beach, Liz’s goal is to shine a light on the experience of enslaved people in the north as part of a bigger project dedicated to reexamining the legacy of slavery in Beverly, the North Shore, and Boston.”

Matelski’s book will also draw parallels to other historical myths, including about Betsy Ross and the creation of the first American flag and the story of Sybil Ludington, often referred to as the female version of Paul Revere.

Matelski is the author of Reducing Bodies: Mass Culture and the Female Figure in Postwar America and in 2021, she was the co-director of a National Endowment for the Humanities Summer Seminar called “The Salem Witch Trials: Their World & Legacy.”

About the Tadler Center
The Tadler Center for the Humanities was founded in 2018 to support interdisciplinary research, writing, and teaching in the humanities. The Center hosts public lectures, seminars, conferences, and colloquia by visiting artists, writers, and scholars. It also offers funding for faculty projects, including the annual Tadler Fellowship and scholarships for outstanding students of the humanities. The Center’s mission is to support engagement with the arts and humanities at the College and in the wider community. By bringing together students, faculty, and visiting scholars, the Center enriches the intellectual life of the college and links humanistic research to the public good.