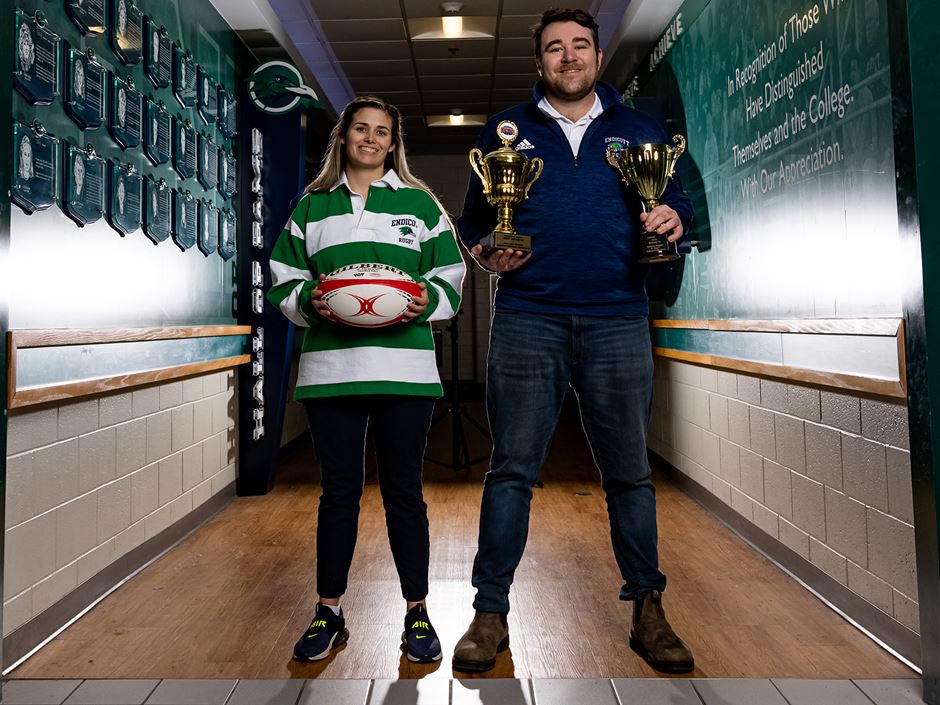 With multiple student-athletes who have left Endicott to play for professional or high-level recreational teams, the College has become known as a strong producer of quality rugby players, according to coaches Carly Baker and Charles Nastasi ’14 M’15.
By: Erin Hatch

Take a peek behind the curtain of Endicott’s rugby programs, and you’ll see why the Gulls’ reputation goes far beyond what one would expect from club teams.

Tight-knit team dynamics, a hardened work ethic, inspiring coaching, and love of sport are all components in this golden reputation that has been building on the national college rugby scene.

Members of the prestigious Colonial Coast Rugby Conference (CCRC) in the National Collegiate Rugby league (NCR, formerly the National Small College Rugby Organization), both the men’s and women’s teams have navigated pandemic pauses to post successful 2021 and 2022 seasons that dovetail with their continuous rise.

With multiple student-athletes who have left Endicott to play for professional or high-level recreational teams, the College has become known as a strong producer of quality rugby players.

Jackson Thiebes M’18 played for the Major League Rugby’s New England Free Jacks, and Matt Gash-Gilder ’21 M’22—currently playing with Endicott during his graduate year—practices with the Free Jacks as a development player. Nicole McCardle ’20 plays at the highest women’s level with the Beantown Rugby Football Club, while Stephanie Yepez ’15 is in the same league as a member of the New York Rugby Club. 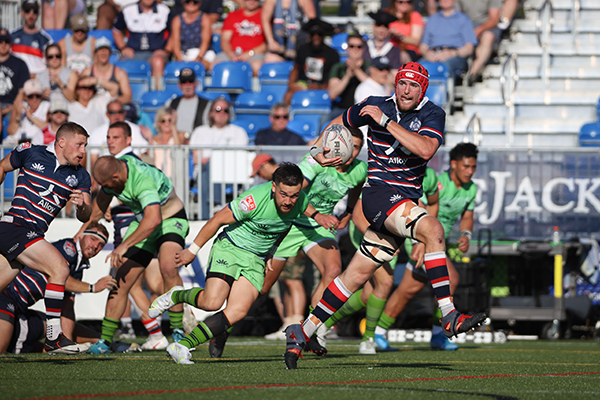 Thiebes, who joined Endicott after playing football at the University of Montana, credits Endicott for helping him get to the Free Jacks while also earning an MBA.

“It was my launchpad to find professional rugby,” he said. “It’s treated like so much more than Division III rugby. Anywhere else, I’m not sure I would have ended up playing professionally. Endicott is producing some amazing players and young professionals; it’s a small school producing big names.”

Boston is seen as a major hub of rugby in the U.S., and central to its growth as a sport. More schools are joining the NCR league; the sport debuted at the 2016 summer Olympics; and more televised games means more exposure to young athletes.

Despite this impressive growth, rugby still has an uphill climb to carve out space in collective public consciousness. In fact, many players joining Endicott’s rugby teams carry a strong athletic background but little rugby experience. It’s up to  more seasoned student-athletes, or those who played in high school, to increase skill level and help teach sport specifics as the team gels.

“Our players have mixed rugby experience—a large number don’t know rugby before they get here,” said Charles Nastasi ’14 M’15, men’s associate head coach and offense coach. “It’s a unique situation, but a big team bonding experience because they lean on those that do have the rugby experience. They’re learning from each other and bringing the best out in each other.”

Thanks to a few players who were tired of traveling off campus to play with a North Shore team, 2022 marks the 10-year anniversary of club rugby at Endicott.

A junior at the time, Nastasi partnered with Jacob Lipp ’14 and Tom Murray ’14 to garner interest and the green light from the athletic department and administration. A women’s team was created too, using the exact same rules as the men, and a unique camaraderie between both teams has continued throughout the programs.

Season records, tournament appearances, rising national rankings, and numerous student-athletes named to all-star lists and travel teams show that the program has been gaining momentum since its inception.

Love for the Game

Players and coaches alike agree that the performance of the Endicott rugby teams is closer to that of a varsity team than a club team, and it’s that joint work ethic that make these teams special.

Thiebes said Men’s Rugby Head Coach Dave Kenkel raises the program through his large network of connections and years of experience, all while leading with a style that reminds Thiebes of Division I coaching.

“Dave held us to a Division I standard in practice and playing,” he explained. “He couldn’t require it as a club sport, but we all took it upon ourselves to go out and find the extra time to lift or do field conditioning. It’s a credit to him and the way he coached and mentored us.”

While the men’s team lacks an established path to varsity status, the women’s program has one, and Carly Baker—the women's rugby head coach who played in college before returning home to Beverly to coach in 2017—hopes that opportunity comes within the next few years.

“Women’s rugby is known as an NCAA emerging sport; there is room to grow,” she explained. “They’re still wanting more teams nationally, but there is a DIII platform, and that’s our goal. We’ve proved we can make that next step.”

Though rugby as a club sport requires a lower official commitment, that doesn’t mean that most student-athletes feel anything less than absolute love for the game and the family-like bonds that form between athletes.

“Rugby is about family, and about trusting and protecting each other while you’re out there,” explained McCardle. “Because, on the field, you're putting your body in danger, and you expect your teammates to protect you while you're doing that for them. Endicott was very good about fostering those strong connections and creating a tightknit team.” 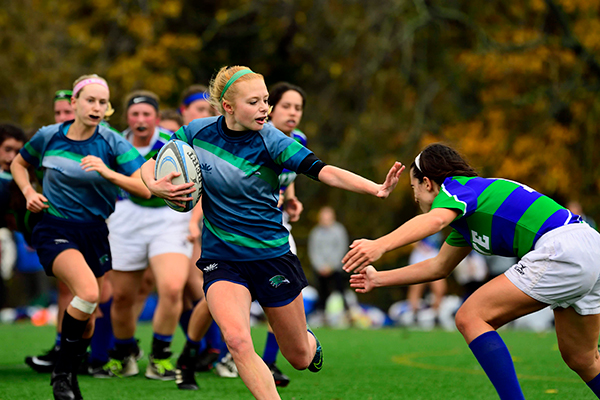 Women’s Assistant Coach Diana Sutherland ’18 said rugby brings a strong sense of community, no matter where you are.

“There is so much camaraderie in rugby,” she said. “I played while studying abroad in Athens, Greece, and that camaraderie carried over to a whole new team. Anywhere I’ve traveled, I go to rugby games and meet rugby friends. It’s nice to have that consistency, the culture is really like found family.”

A common thread in rugby conversations is that, yes, the sport is physically demanding and, yes, there is inherent risk, but it provides a unique outlet for athletic people looking for a community.

“It’s unlike any other sport I’ve played,” said Carolina Stubbs ’23, who said joining the team was “the best impulse decision” she ever made. 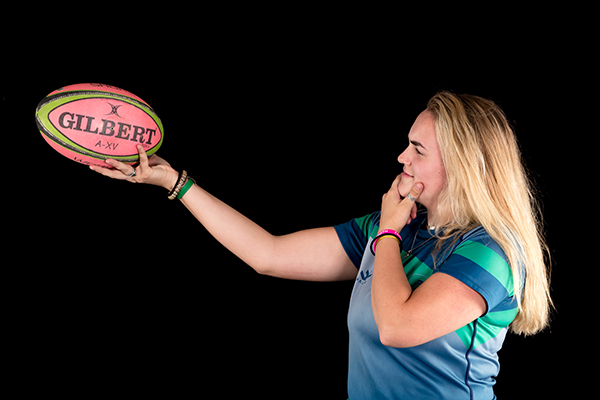 “When the other team is across the field and the game is on the line, the adrenaline comes out. I was scared to get my first hit, but not scared enough to not want to do it again and again. It’s my outlet—I joke with my roommates that they get the best version of me when I come home from practice. It’s been so therapeutic.”

But rugby isn’t as dangerous as people think, according to Gash-Gilder, especially when it comes to concussions—despite the fact that a scrum cap (which protects the ears) is the only piece of protective equipment most players wear.

“Since we don’t have pads, you don’t really have a false sense of security. And there are also rules in place that prevent you from having lots of head collisions, so it’s relatively safe,” he said.

Sutherland agreed: “Anyone can play, it’s really inclusive. We’ll train you no matter your skill level, fitness level, or body type, and we’ll celebrate our differences.”

Nastasi summed up Endicott’s success as “diversity, camaraderie, hard work, and a constant ability to want to grow as rugby players and as people.” He added that the program has a symbiotic relationship with the College, both helping the other grow and spread the Gulls’ great reputation.

“We do well—we work hard but we have fun,” said Baker. “That’s what people are attracted to.”

Watch Endicott men's rugby compete in the NCR Championship May Madness 7s from May 28 through May 30 in New Orleans.