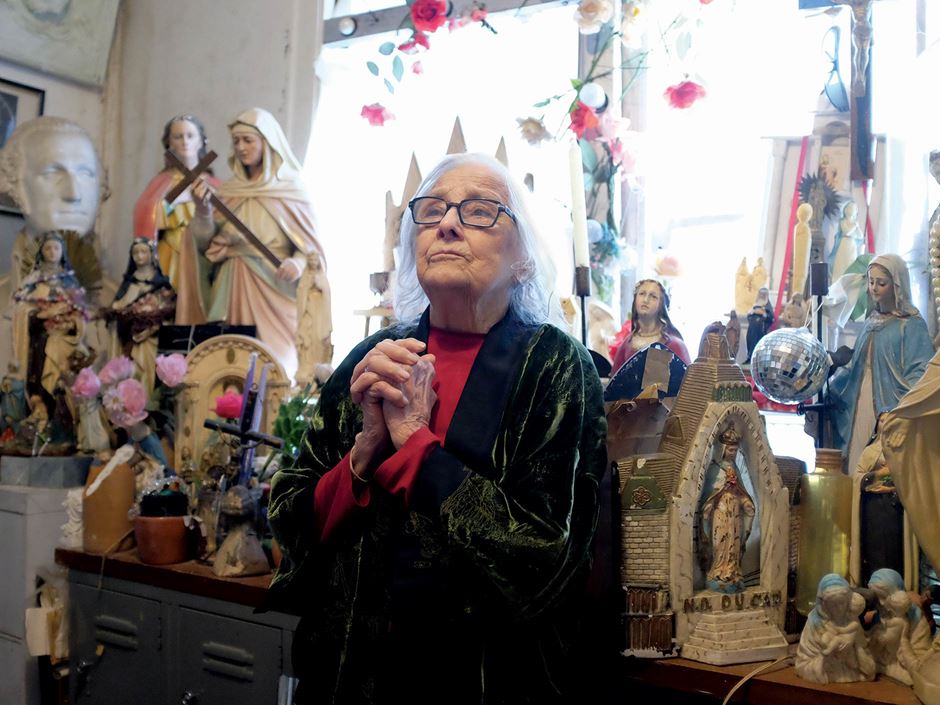 A new exhibit by Simone Salvo chronicles the life and artistic legacy of her grandmother, June Southworth, a lifelong artist who nurtured women artists on the North Shore.
By: Lindsay Slattery

Hand-recordings by Simone Salvo show her entering her grandmother’s home, where mannequin heads rest on tables strewn with a clutter of art supplies, stationary, postage, and a sculpture of reaching, alabaster hands serve as a landing strip for pieces of fabric.

June Southworth, appearing in front of a wall decorated with dozens of crosses, all fashioned from different materials, looks at her granddaughter and exclaims, “I can’t believe she’s here,” before regaling Salvo with a short sing-song anthem. 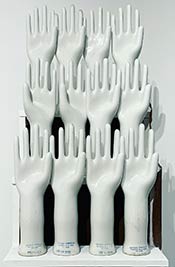 Salvo is the artist behind The Amazing Women’s Club: The Co-creation of an Heirloom, a new exhibit at the Manninen Center for the Arts that catalogs her grandmother’s life, ephemera, and creative legacy as an act of preservation.

A lifelong artist, Southworth grew up in Haverhill, and eventually settled in Gloucester. She taught art at Beverly High School and, over the decades, nurtured a coterie of women artists who she dubbed members of her Amazing Women’s Club. Members were initiated with a purple rubberband to wear on their wrists.

As part of her master’s thesis, Salvo—a New York-based artist now pursuing a postdoctoral fellowship at NYU-Tisch at the Interactive Telecommunications Program—set out to chronicle her grandmother’s life using everything from VHS tapes and voice recordings to handwritten poems and, of course, her artistic output.

Bollenberg was also personally touched by Southworth’s commitment to the North Shore art community and to helping women develop their artistic footing here and beyond.

“She was a great figure in my mother’s life,” recalled Bollenberg, also a Gloucester native. “My mother is an artist, and June drove my mother to her first art exhibit.”

Southworth’s own work explores complicated women’s issues including sexuality, assault, and more. One notable work is for Anita Hill, who testified before Congress in 1991 after accusing Clarence Thomas, then a Supreme Court nominee, of sexual harassment. 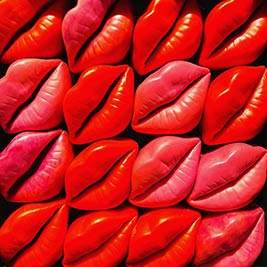 Much of Southworth’s work is also autobiographical, drawing from her own lived experiences as a child born to Lithuanian immigrants in a Massachusetts mill town and with a sister with polio. Over the years she has written many of her stories down, which Salvo unearthed in the making of the project.

“In the process of looking at these documents together, it became clear that June’s memory has shifted—she’s 93 years old—and I often ended up recounting the details of her own life back to her,” said Salvo.

Salvo described The Amazing Women’s Club as work in “the medium of memory.” Southworth herself referred to Salvo’s project as “making sense out of nonsense.”

But one thing was certain: Southworth has an incredibly unique outlook on how to transform tragedy into fuel for empathy, humor, and creativity. This shows up in the exhibit most notably in the form of crosses.

“Since her family is from Lithuania, she was influenced by the Hill of Crosses,” explained Salvo. “It was a site of pilgrimage where people brought crosses to symbolize Lithuania’s independence. The crosses were removed during the Soviet occupation, but they slowly reappeared. June found that inspirational, and would collect crosses that reminded her of specific people. I wanted to interpret this collection and represent it with color and whimsy, using the motif as an entry point that doesn’t carry the same severity that crosses and crucifixes can connote.” 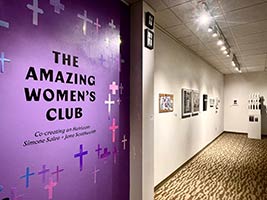 For Bollenberg, the exhibit also speaks to the Diversity, Inclusion, Equity & Belonging initiative here at Endicott: “This work has a culture behind it—but it’s also by a woman who is aging, and women over a certain age become invisible. June doesn’t have an online presence, either, and so she’s even more invisible.”

When working on The Amazing Women’s Club, Salvo and Bollenberg meditated a lot on the idea of art as an heirloom.

“The exhibit is a huge metaphor for how, within art education, art is still so much of a craft that is being handed down from master to pupil,” explained Bollenberg.

“June’s works haven’t seen gallery walls in many years, and when I was putting the exhibit together, I uncovered this handwritten book introduction that she’d written as if she were me,” said Salvo. “She wrote, ‘As a child, my grandmother would tell me little stories and we would laugh and say, ‘We have to write a book.’ It gave me chills, and I felt affirmed in this process.”

The Amazing Women’s Club will be on display at the Manninen Center for the Arts through January 7, 2022.