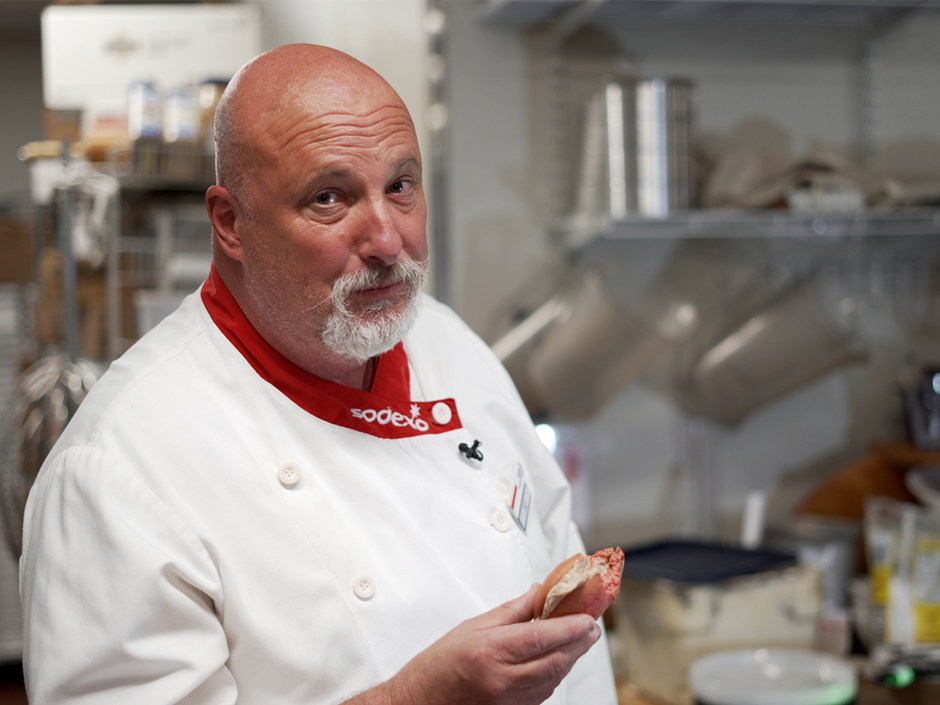 Pastry chef Ed Charest is always whipping up something magical for the Endicott community, including his famous whoopie pies. And, yes, the recipe is included.
By: Sarah Sweeney

This month, Charest capped a 14-year run as an elected official, including six years as a Peabody City Councilor, which means he can now focus exclusively on his other constituents: The Endicott community.

Only this time, it’s not about politics—but pastry.

For 15 years, Charest has served as Endicott’s pastry chef, cooking up sweet treats daily in the Callahan Dining Hall while politicking on the side. Though, in Charest’s world, politics and pastry really aren’t that different.

“When you do something for somebody and they say thank you and have a big smile, that’s what it’s all about,” he said. “But as a pastry chef, I do get more compliments than most people in their professional career.”

Each day, Charest arrives to campus in the wee dawn hours. That’s when the magic happens.

While most students are still snoozing, Charest is busy preparing anywhere from 900 to 1,200 cookies, three different kinds of pastries (2-3 dozen each), and a full sheet of cereal bars—not to mention the special orders for various events around campus.

“I like to create fusions, so I take traditionally what you’d use in one dessert and mix it into another dessert,” said Charest. “For example, today I took pie dough and put it in a tart shell and spread chocolate fudge on the bottom. Then, I chopped up cookie dough and put that over the fudge, and then I’m going to pour cheesecake over that and bake it all together.”

Most of the time, Charest works without recipes, mostly from memory, and always experimenting with his pastry sidekick, Maria Latrou.

“Maria always tells me, ‘We need to write that recipe down!’ But, we never do,” he laughed.

Charest’s recipes reside mostly in his memory, but only one is top secret. That would be his frosting.

“There are many recipes for frosting but what I make has only been written down and given away only twice—and the only ones who have it are my two daughters,” he said. “My wife doesn’t even have it.”

Though Charest grew up with parents who owned a donut shop, he wasn’t always destined for the hands-on, behind-the-scenes work that both baking and politics require. For one, he was accident prone.

“I was one of those kids that went to the hospital a lot,” he said. “I broke a lot of bones.”

But he was also painfully shy.

“In high school I had some great teachers, and one of them got me into drama club and that’s when I really came out of my shell,” he recalled.

That’s also when he took a job at a supermarket on Cape Cod, where Charest grew up.

There, Charest learned the basics of baking from scratch. “My parents kept saying ‘college, college, college,’ but I had a fantastic boss, and I liked working with my hands,” he said.

And then there were all those compliments. “Who doesn’t love being told, ‘I just love what you make,’” he said. “That’s how I started dating my wife. She always said I smelled like a cookie.” 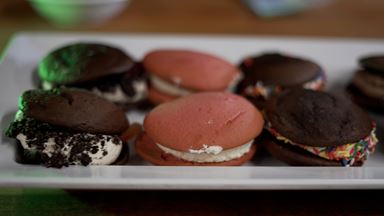 When Dr. DiSalvo became President in 2019, he tapped Charest to whip up some whoopie pies, one of his favorite treats. Whoopie Pie Wednesday was born.

At the end of the week, Charest usually gets a call from Dr. DiSalvo with a flavor that’s been on his mind, or a request from students. When Wednesday rolls around, Charest’s whoopie pies steal the show.

“There’s a lot I love about Endicott, and Ed’s desserts are right up there,” said DiSalvo. “And of course, I enjoy collaborating with him on Whoopie Pie Wednesday, and then eating that collaboration.”

Whether politics or pastry, Charest is all about serving the people.

Why not whip up some whoopie pies of your own this Thanksgiving? View Charest’s recipe here.