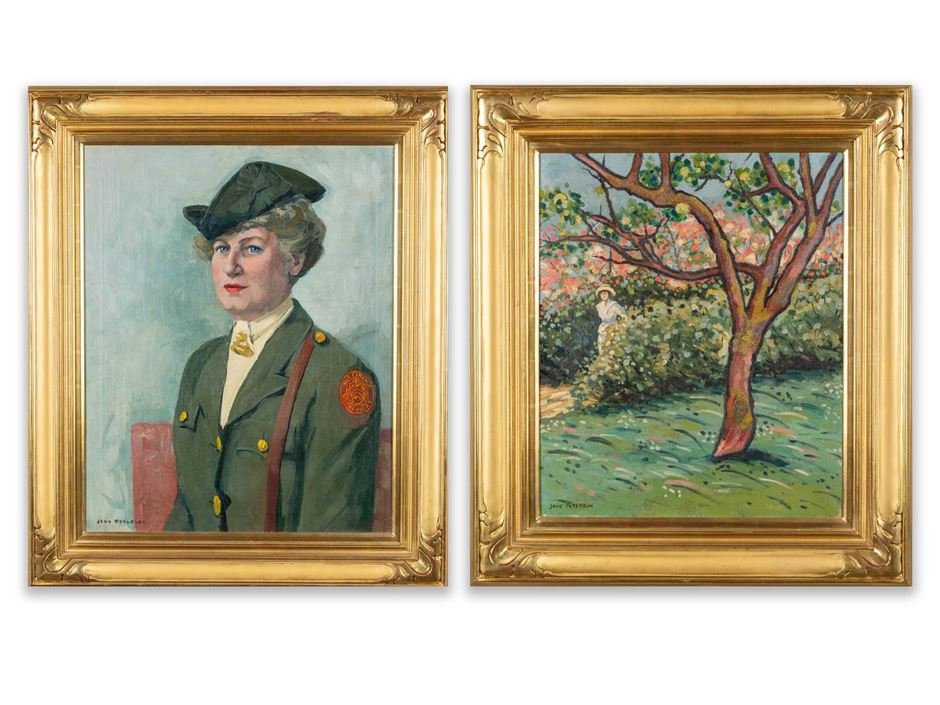 A new Jane Peterson exhibit at the Manninen Center for the Arts draws from namesake Walter J. Manninen’s extensive collection.
By: Sarah Sweeney

At first blush, her work may seem traditional—many of her paintings are Impressionist, still-life florals—but according to Elizabeth Bollenberg, the New York-born Peterson was “a renegade in her own right.”

“She was a woman at the turn of the 20th century who put herself through college, traveled independently throughout Europe, knew Gertrude Stein, hung out with Matisse and Picasso,” explained Bollenberg, the Gallery Director at the Manninen Center. “She lived life on her own terms.” 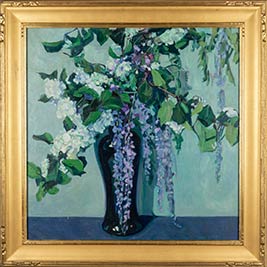 Now through January 2022, Peterson’s paintings are on view at the Manninen Center in an exhibit titled “The Principle of Beauty,” which draws from the extensive collection of the Center’s namesake, Walter J. Manninen, and is presented in partnership with the Endicott College Collection – Walter J. Manninen Trust.

“Bright, uplifting, well-crafted, peaceful, inspired. This is what I experience walking through the Jane Peterson exhibition,” said Mark Towner, Dean of the School of Visual & Performing Arts. “Interestingly, some of the same words can be used to describe the relationship we have with Walter J. Manninen.”

In 2012, Endicott received one of the largest philanthropic gifts in its history when Manninen arranged for the transfer of his entire collection of art, antiques, and his primary residence—by renowned architect Royal Barry Wills—to the College.

“I wanted the collection to stay together, I wanted it to stay on the North Shore, to be in a place with public access so that it could be appreciated, and to be involved in education,” said Manninen, a former banker and business executive, who resides in Rockport, Mass.

Peterson’s paintings, along with the rest of the Endicott College Collection – Walter J. Manninen Trust will be actively displayed, lent to other institutions, and developed as traveling exhibits.

At the beginning of his journey to becoming an art collector, Manninen first encountered the beauty of Jane Peterson’s art through a family member’s collection. “My mission from that point forward was to acquire a Jane Peterson painting,” he recalled.

At a Newbury Street gallery in Boston, Manninen did just that.

At the time, the painting, “Amethyst & Jade,” was only the fourth artwork in Manninen’s burgeoning collection.

Over the years, Manninen gravitated to the work of American artists, women artists, artists with ties to Provincetown, the North Shore, and Cape Ann, as well as Jewish artists, “not by design but by inspiration.”

“I never thought that, many years later, 14 works of art by Jane Peterson would be in this collection,” he said of “The Principle of Beauty.”

“The Endicott collection of Jane Peterson’s paintings are a sample of the various subject matters, pallet, and mediums that she has become famous for.”

Manninen curated the exhibition from his own collection, borrowing two additional paintings to round out the show, which presents everything from Peterson’s bright florals and Cape Ann seascapes to a surprising portrait of a female officer.

“She was a little radical for the time—she went to Pratt, and girls didn’t go to school then, so she broke through barriers,” said Bollenberg.

“It was through the ceaseless pursuit of artistic education that Jane Peterson discovered a doorway to the rest of the world. She leveraged every bit of privilege made available to her as a means to advance herself forward in her artistic career. When visitors look at this collection it is important to remember that you are beholding works crafted from her specific joy, in pursuit of passion and the principle of beauty. The artist that created these works was doing precisely what she wanted, and loved, to do the most.”