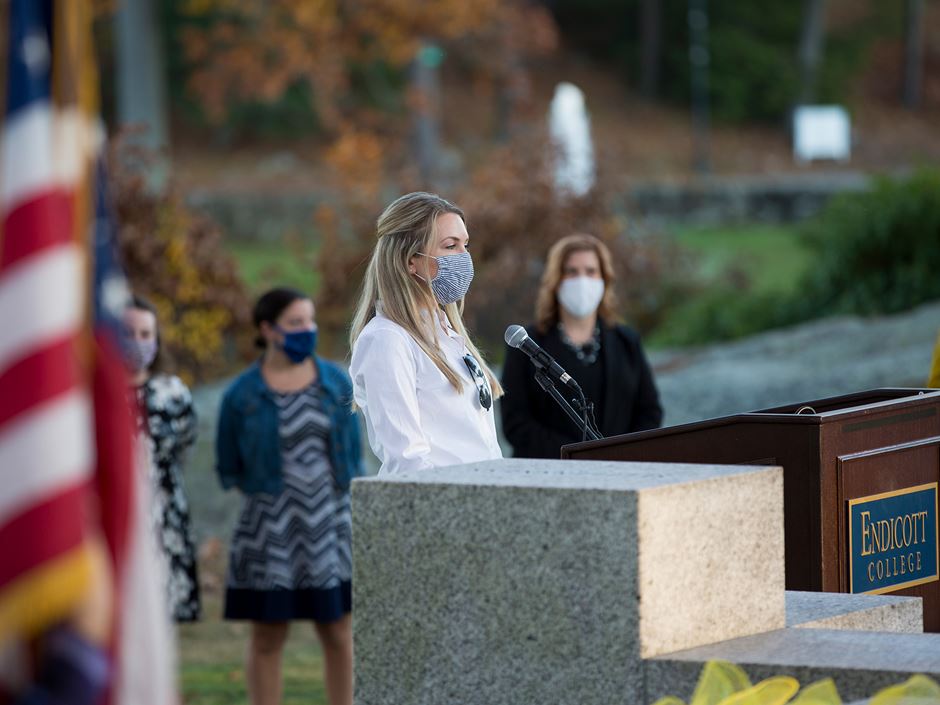 President of the Veterans Club on campus, Katherine Roberts’20 M’21 is aiding in the successful transition of veterans to Endicott and beyond.
By: Rosemary Poppe

Katherine Roberts ’20 M’21 graduated with her bachelor’s degree in psychology through the Van Loan School of Professional Studies this past May. She is currently obtaining her master’s degree in homeland security and has served in the military for the last eight years. Roberts is leveraging her experience in the Coast Guard, her education, and the Endicott College community to make a positive impact on the veteran community. As the President of the Veterans Club on campus, Roberts, alongside her fellow E-Board members—Club Vice President Patrick Joseph ’23 and Club Secretary Brandon McCauley ’23—is creating what she describes as, “an inclusive network that connects student veterans with other student veterans and allies. Its mission is to foster successful military transitions through facilitating supportive campus and public service engagements that serve the greater Endicott community, while raising veteran familiarity on campus.” 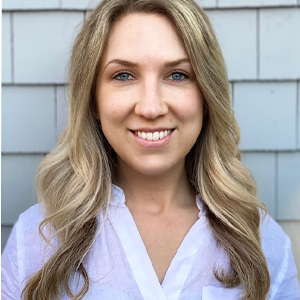 For her senior thesis project, Roberts researched the connections between trauma and homelessness among the veteran population. She says, “I began to see that veterans are a particularly vulnerable population that disproportionately represent the homeless population. I learned about the importance successful transitions have on veterans’ reintegration, and truly felt that more emphasis should be placed on fostering these successful transitions.” Her research highlighted three significant areas that assist veterans’ in their successful transition into civilian or student life, being education, employment, and connections. She says, “At Endicott, there is a sizable veteran population. I felt that this would be the perfect place for veterans and non-veteran students to come together to form those necessary connections that are conducive to successful transitions post-service, through campus and community engagements. Helping form the Veterans Club became an extension of my research, where I could apply what I learned to help better the community.”

Giving back to her veteran community is just one part of Roberts’ plan of action, so to speak. She is studying homeland security with a focus in emergency management, in the hopes of obtaining a career with FEMA. As an E-6 Culinary Specialist, Petty Officer First Class for the Coast Guard, she already has a wealth of experience in this area. Through her military career, she says, “I have participated in aids to navigation, drug interdiction, search and rescue, and ice breaking operations, to name a few. I have also been fortunate enough to have had the opportunity to travel to more countries than I have states.”

Endicott is known for its strong sense of community, and in forming the Veterans Club, Roberts says, “I felt that being able to harness successful transitions though campus and community engagements was a perfect platform to apply what I had learned, to help other transitioning veterans at Endicott. Being the President of the Veterans Club gave me the authority, along with other members in the club, to design events around raising veteran familiarity on campus, while concurrently boosting a climate that honors veterans, their families and friends.”

Dr. Maureen Znoj, Director of Undergraduate Programs for the Van Loan School of Professional Studies, and is the advisor to the Veterans Club. She says, "Katy's commitment, leadership, and service to veterans is unwavering. She has worked hard to reinvigorate the Veterans Club and bring attention to important issues including homeless veterans. One example is the service project she is overseeing where care packages are being made and will be donated to community homeless veteran shelters. I am honored to work alongside Katy and support the work of the Veterans Club."

Read more stories like this, learn about the military and veteran benefits available through the Van Loan School of Professional Studies, and follow us on Facebook.