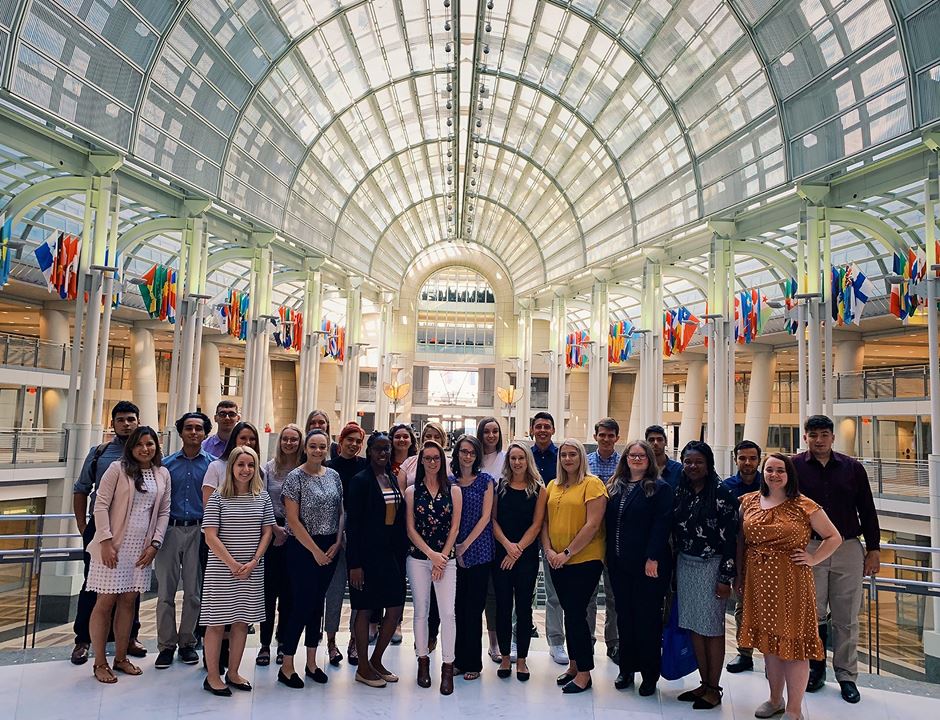 Current digital media major in the School of Communication, Tacy Cresson '20 is working at The American Prospect in D.C.

Current digital media major in the School of Communication, Tacy Cresson '20 is pretty much Endicott College’s Diane Sawyer. At present, she is an editorial intern at The American Prospect in Washington, D.C., but she has also completed internships at both the Cape Gazette and Hampshire Marketing and Media, wrote for The Odyssey Online, and has been a part of the Endicott Observer for more than two years. Cresson’s choice to venture out into the wide world doesn’t surprise us. After all, Washington is the heartland when it comes to political reporting.

We asked Cresson when she first became interested in politics. She says, “I don’t remember a time I wasn’t politically driven. Truly, I remember since the time I could form my own opinions, I’ve always had one. I owe so much of my political passions to my parents, who, if they were still around, I’d like to think would be proud of where I’m at in Washington, D.C, using my voice and the power of the pen to ignite a larger understanding on a particular issue.

But, my earliest memories come from dinner conversations with my parents–who were both extremely involved in politics–my dad was a journalist and historian, and at night he’d tell stories about his time reporting in Saigon, Vietnam or backpacking around the world. Once, he told me a story about when he was stationed in Saigon and went out to interview a Green Beret troop. He spent the night with them in the jungle. They went out the next morning on patrol and he went back to Saigon to file the story. That whole troop disappeared—never another word from them. That stuck with him.

“He’d tell me about his conversations with Joe Biden, who he’d become close friends with, or the people he met hitchhiking across the U.S. the three times he had. He worked for a local newspaper in Delaware where we lived called the Cape Gazette (where I did my sophomore year internship as a reporter), and he’d take me to events he was reporting on or let me roam the halls of his newsroom. He was a dog of a journalist and genuinely dedicated to his craft.

“Both my parents instilled so much of the importance I now appreciate about politics, and I think about the dinner conversations we once had every time I go to write a story. It’s all come full circle, I think, from being the eight-year-old girl with questions to the twenty-two-year-old woman finding answers to them. I knew my freshman year after the 2016 election that there was an overwhelming and unfortunate amount of contempt among people that became unbearably divisive, and since then I’ve become dedicated to crafting a future to make politics an area that bridges that divide. Now I’m in D.C. reporting on the 2020 election, in the political hub of America. I’m humbled. I’m driven. I’m charged. I’m right where I need to be.”

The road to Washington was a journey paved not only by her parents, but by her contacts at Endicott.

Cresson says, “I remember the beginning of my junior year Cherie Lynch (assistant professor of experiential learning and school of communication internship coordinator) mentioned a new program for students to go to D.C. or New York City for a distance internship. I decided that second, without thought, that I was going to D.C. I’m so appreciative of Cherie and my advisor, Lara Salahi, for guiding me along the path to get to where I’m at now. Professor Salahi truly believed in me and having that support hasn’t, and never will, go unnoticed. They both have helped tremendously in setting up my academic schedule the past year to get everything set-in-stone for this distance internship to work smoothly.”

Cresson’s advisor, Lara Salahi (our assistant professor of broadcast and digital journalism) says, “As Tacy's advisor, I constantly encourage her to take on new opportunities and to be confident in her abilities. Anyone who knows Tacy knows how fierce and self-motivated she is, so advising and guiding her through her academic career many times consists of cheering from the sideline and watching her shine. She knows I am one of biggest advocates. As a working journalist, I know that success in the field requires dedication, passion, and boundless motivation–everything else is learned. Tacy is capable of even more than she thinks, so positioning herself by being in the right place was critical to advancing her career. I am certain she has done this through her internship in D.C.”

Lynch says, “Tacy is exceptional for many reasons. If I had to narrow it down, I would point to her skills in digital storytelling and to her triple-threat of gritty career-ready attributes: curiosity, resourcefulness, and independence, which she regularly applies to her already-robust early professional life.”

“Students are able to access D.C. internships that are tailored to their field and specialized area of interest. Students contribute to substantive work in a four-day internship; they can intern with media companies, non-profits, congressional offices, businesses, and nonprofits. Our D.C. partners work with Endicott students one-on-one to guide them through the site selection process. 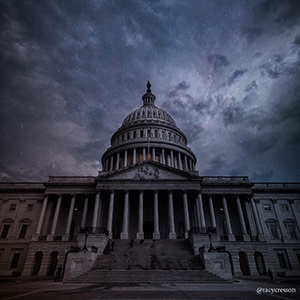 To date, this is Cresson's favorite shot taken in D.C.

“Our distance interns are curious, independent problem-solvers who have a sense of adventure and self-direction. Working with these students is always a highlight; it's terrific to see students have the opportunity to experience so much growth, both personally and professionally, by living and working independently in a new environment. Over the past year and a half, we have had multiple students with the D.C. internship program and other students interning at a distance in Los Angeles, New York City, Connecticut, Florida, Cork, Ireland, Tel Aviv, Israel, and Madrid, Spain.”

While it only seems natural that Cresson would choose the capital, New York was certainly an appealing option. The real differentiator for her was steeped in her past. She says, “The last time I went to D.C. with my dad we were walking the National Mall and he looked at me and said, ‘This is modern-day Rome,’ and that was genuinely the most sublime statement I’ve been told. It’s true, too. I was six years old and overwhelmed with the beauty of the history, the architecture, and the politically charged atmosphere D.C. has. So, when I learned that I could live here and I could be part of a movement greater than I am to uphold such an important part of our democracy, it felt right and it felt necessary. I knew that I would have an opportunity to work alongside some of the best reporters in an effort to undercover the truths of our government, which gave me this feeling of being invincible. I still feel that.”

One cannot simply mention the word politics in today’s world without admitting that we live in a tumultuous time. Cresson believes that it can be overcome. She says, “Politics don’t have to be as divisive as it’s become. Which, truly, has been my motivating force. Living in Washington has taught me the importance of civil discourse–it’s taught me to listen, not just to respond, but to learn and understand. As long as you state the facts as is, even in the most politically tumultuous time in most of our lives, there’s still room for understanding.”

But Washington is more than politics. It’s a lifestyle. Each morning, Cresson wakes up feeling like she is on a vacation. She says, “I look out of my window and stare directly at the Washington Monument, the Pentagon, and the Capitol Building. I promised myself I’d never get used to it. I’ve frequented a place called The Wharf–which is, literally, a wharf. It has such a homey North Shore feeling to it with its gorgeous waterfront views and restaurants all in one place. You can take a water taxi from the Wharf to Old Town Alexandria and pass by Watergate, the Washington Monument, and Lincoln Memorial. It’s absolutely stunning. I’m constantly in awe.” 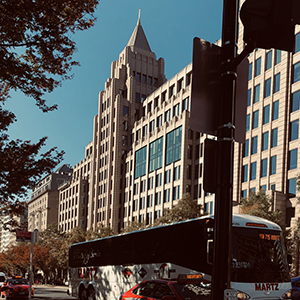 One of the views Cresson walks past on a daily basis.

And when she goes to work, she steps right into the realm of history as it is being written. She says, “My internship office is directly next to The Washington Post. Every morning I walk by the gothic-looking building, taking in its history, and set intentions for myself as an aspiring journalist. It’s a whole new level of motivation to look at one of the greatest publications and think one day, I might just be inside.”

Endicott’s partnership with the Washington Internship Institute is an excellent opportunity for students of all kinds. Whether you are interested in politics or you simply want to travel further and expand your horizons, the experience is a smooth one with potential for a lot of personal growth.

Cresson says, “The opportunities here are limitless. Going through the process with the Washington Internship Institute eased the nerves of finding an internship site. Working directly with a Washington-based coordinator made the application process extremely organized; my internship coordinator, Kate Schaefer, updated me with new job postings and worked to edit all my cover letters to perfection prior to sending. It was tremendous help.”

Washington Internship Institute’s Internship Program Coordinator, Kate Schaefer says, “Essentially, my colleague Sara and I are personal career coaches for the students we work with. We talk through what kinds of internships would be a good fit for a student’s interests and goals, help students gather application materials, and provide feedback on resumes and cover letters. In many cases, we’re able to leverage our contacts in different organizations to make sure our students’ applications get a serious review. We prepare students for their interviews and provide advice when it comes to internship offers. We’re here to guide students through the whole process of applying to internships in D.C.

Tacy’s strong background in journalism was really helpful in searching for internships in that field. She’s a great writer and a dedicated intern, and I hope she has a bright future ahead of her.”

Endicott and The American Prospect

Cresson has learned a lot about reporting between her classes and involvement on-campus at Endicott and at The American Prospect. One major area she helps with on a daily basis is fact-checking. Her team has been very supportive and has helped her build toward her ideal future. 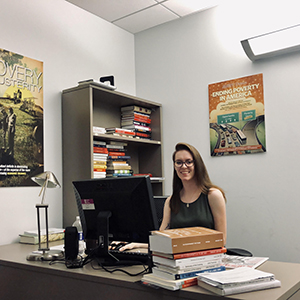 Cresson at her desk at The American Prospect.

Cresson says, “I’ve grown astronomically and am ready to take on the world post-grad. This experience has solidified my want to move back to D.C. and become a full-time political reporter. I’m sure moving back here and living out my dream will continue opening doors and ultimately place me exactly where I need to be. (Let’s hope it’s the WaPo).”

You Are Just Beginning

When you first get accepted to school, it can feel like you’ve reached the pinnacle of your life. You’ve made it. It’s true, you should be incredibly proud to have reached a new level of self, but know that there is always more out there for you. Take it from Cresson:

“You have no idea what doors are going to open for you unless you start the journey for yourself. College is about new beginnings, finding yourself, and paving the way for how you want to succeed. There’s so much to explore that’s beyond the borders of Massachusetts, and so many moments to seize control of and grow with. Sometimes, I’ve learned, placing yourself in a new area allows you to become everything you want to become with limitless boundaries. It’s truly an intoxicating feeling to feel your most authentic, genuine, self doing what you love.”

Learn more about interning through our The Washington Internship Institute Partnership at wiidc.org/endicott.