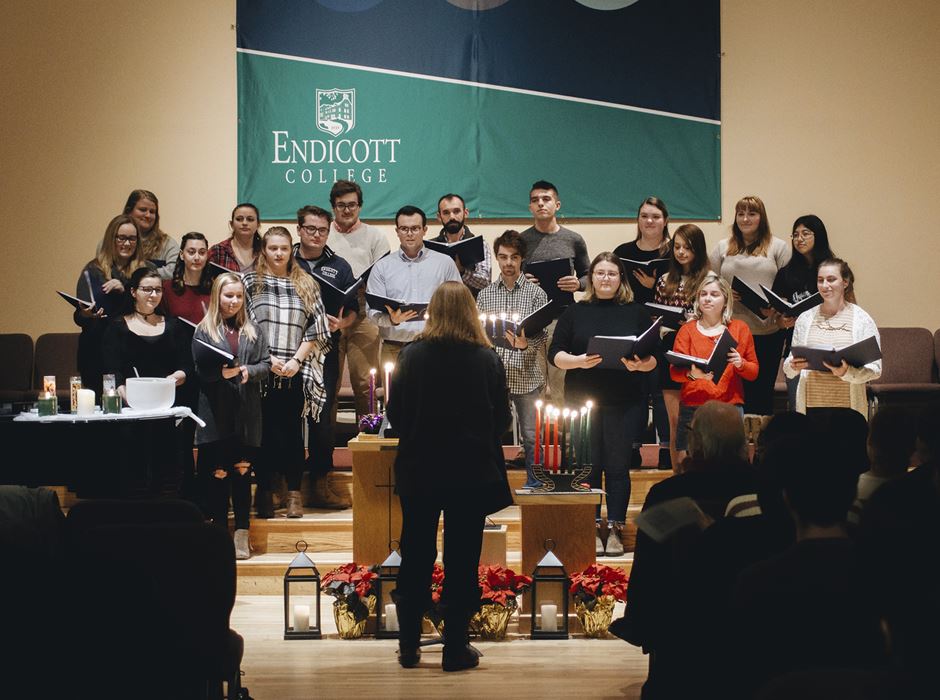 Over the past week, Endicott College’s campus was flooded with light. Two incredible and very different events occurred, but both were warmly received by all.

The Festival of Lights

The Festival of Lights is an annual appreciation event that is led by the Office of Spiritual Life. Prior to the festival, community members were asked to nominate bright lights in their lives. Students nominated teachers. Teachers nominated star students. Staff nominated fellow team members and leaders. Leadership nominated their hardworking teammates.

Chaplain, Gail Cantor says, “Festival of Lights is special because it is a time when students, faculty, and staff come together to celebrate the spirit of our community.  We celebrate all of the December holidays, but more than that we appreciate how much people in this community bring inspiration and light to each other on a regular basis, and how important that is, especially in challenging times.”

The Interfaith Chapel was filled with trees that were lovingly decorated by the Creative Arts Club, the Service Club, the Wishmakers, the Residence Housing Association, the Alliance, the Endicott equestrian team, Her Campus, the Law and Justice Club/Alpha Phi Sigma, the Society of Professional Journalism, and the Comic Club. In addition to the trees, festive jars were contributed by the DREAM Club.

Dubman’s tradition was followed by the lighting of the Advent Wreath and a reading of Gospel of Matthew, verses 13-16 by Claire Orr ’22.

Next, Kwanzaa was represented by a volunteer student named Ethan Richards ’22 who lit the traditional menorah while Cantor read the virtues behind the holiday.

Finally, a last candle was lit to represent those who celebrate the light at other times of the year such as Diwali or Ramadan, or who have no faith tradition. Together, our community represented everyone in turn.

When the lights were all illuminated, the Endicott Singers came up and sung “Sogno di Volare,” by Christopher Tin.

Our Assistant Dean of Students, Lauri Rawls was brought up to the front of the chapel as the staff example of a bright light. She has been here for 20 years and is involved heavily with spiritual life and community service. Cantor says, “Lori is a selfless person who leads by serving people.”

One student, Maddie Smith, was chosen to acknowledge all of the incredible students. Cantor says, “the students here really light up my life.”

Small candy gift offerings were given to each club that created a decorated tree and they were accepted in turn by representatives.

At the close of the evening, a special gift was given to all of the bright lights. A mug for each nominee so that they could always remember that they bring light to someone else’s life.

The Festival of Lights really was the perfect way to usher in the holiday season together.

Following on the heels of the Festival of Light’s good will was Lumens II, which also took place at the Interfaith Chapel.

On Friday, December 6 and 7, the acclaimed Endicott Singers and Chamber Ensemble performed works together and separately by candlelight to an awestruck audience.

The concert featured “To the Hands,” by Pulitzer Prize winner Caroline Shaw, in which the famous text from Emma Lazarus’ poem, “The New Colossus,’” was juxtaposed with a Latin text originally set by Buxtehude, asking listeners to consider our collective responsibility toward those who face struggle. The concert also addressed other current issues like refugees, climate change, suicide/political protest, and the means to overcome some of the feelings of hopelessness that can arise.

The training and cultural immersion that went into the performance were evident. Students met with Kuoya Dat, a senior business management major, who lived as a refugee from South Sudan for much of his life so far.

Chair, Performing Arts, Rebecca Kenneally says, “When preparing any piece of music, it is really important to study the context. ‘Who wrote it?’ ‘Why?’ In the case of ‘To the Hands,’ Shaw wrote it as a response to the global refugee crisis. How can we really sing about that if we have no experience with it? We reached out to Kuoya in hopes of learning what we could about the experience of someone who has lived as a refugee. We can never really understand, but in trying, we broaden our ability to relate to the music and make it relatable for our audiences.”

Kenneally, who is also the director of the Endicott Singers, continues: “Preparing for ‘Majestic Leviathan,’ about humpback whales, was a treat because the composer is local, and we could his passion in bringing awareness to the plight of sea creatures as our seas warm, rise, and change. By doing this, the music becomes more than a bunch of dots on a page, more than pretty ‘oohs and ahhs,’ and instead becomes a living, breathing statement. Music should be alive and talk to its listeners. Only when we prepare in these ways can we hope to make music come alive."

The candlelit community experience will not soon be forgotten.
Share This