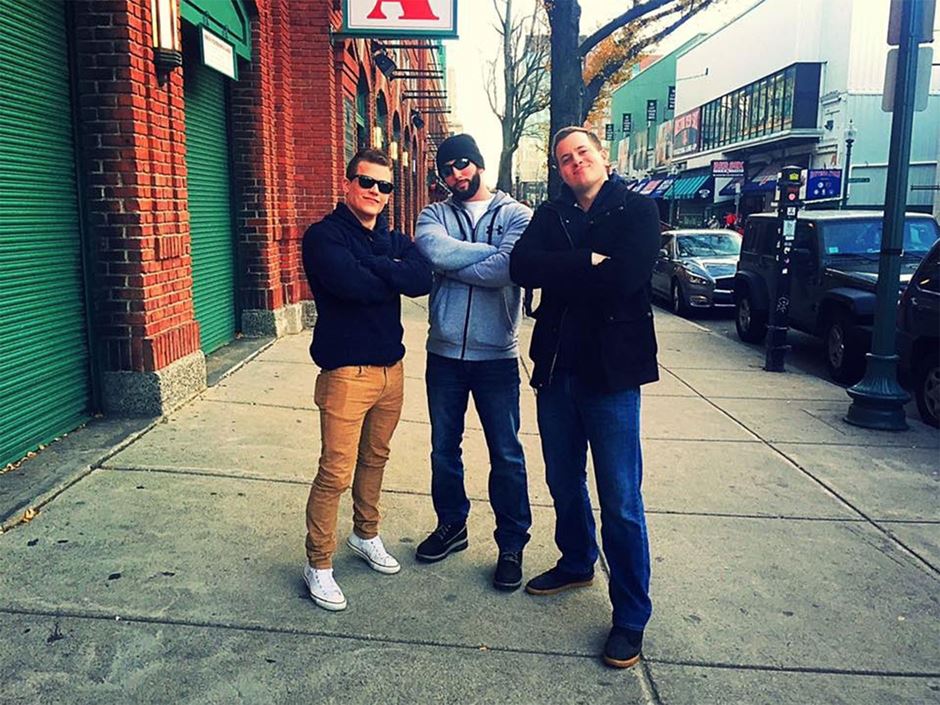 It was the offseason before the Boston Red Sox's 1998 season. Hopes were on the rise for the local nine, something that wasn’t always the case during their 86-year World Series-winning drought. And who could blame the fans—they had just traded for their now-legendary ace Pedro Martinez to go along with the bats of Nomar Garciaparra and Mo Vaughn. Yes, they were coming off a losing record the previous season, but maybe, just maybe, the Sox were on the right track again.

From their seats in Section 10, the Carrabis family saw a much-improved Sox team in 1998, as they clinched the American League wild card before losing to the Cleveland Indians in the AL Division Series. That season was a turning point for Boston and the young Carrabis. Martinez and a lovable bunch of "idiots" reversed the curse in 2004, and Carrabis' Red Sox fandom was fueled with no end in sight 21 years later.

During that same season, Steve Perrault '12 (Hingham, Mass.) sometimes watched Martinez and the crew play up close and personal from the box seats his father occasionally got through work from 1995-00. That time period also fueled his baseball and Red Sox fandom, and with it his career aspirations of getting into sports media.

Looking back now, it was one of many times when Carrabis and Perrault—now fellow hosts of Barstool Sports' "Section 10 Podcast" along with Coley Mick—were in the same place without knowing the other existed, something that would be repeated often on the campus of Endicott College.

Section 10, From the Basement to New York City

The "Section 10 Podcast" had humble beginnings before it became the 242-show behemoth under the Barstool Sports brand out of New York City that it is today. It all started thanks in part to an Endicott connection, as Carrabis connected with CBS Sports writer Pete Blackburn '13 through a former high school baseball teammate.

Blackburn was interested in creating a podcast about men's lifestyle, while Carrabis wanted to do one on the Red Sox. So the two combined their interests and formed “Section 10 Podcast” in 2015. At the start, they aired the show from Carrabis' childhood bedroom or the basement of Blackburn’s mother with basic recording equipment from Amazon.

A major turning point for the show came from Ep. 10, which was when they had their first guest, former NESN on-air personality Gary Striewski. While guests are now a regular part of the show, that wasn’t the same case in the early days. And people started to take notice.

One of those people was Perrault, who was working at NESN at the time alongside Striewski. Perrault had never heard of the show before Striewski went on, but he decided to give it a listen when his co-worker and friend tweeted out his interview. To say Perrault was instantly hooked would be an understatement.

"Section 10 right off the bat felt like a product. It felt like something instead of a couple of guys in the basement with some microphones saying nonsense. It actually felt like a real thing."

Perrault was impressed by the duo's utilization of the Fenway organist and the public address announcer saying, "Ladies and gentlemen. Boys and girls. Welcome to the 'Section 10 Podcast.'" He says, "That was when I realized these guys had some kinds of connections and knew what they were doing. Section 10 right off the bat felt like a product. It felt like something instead of a couple of guys in the basement with some microphones saying nonsense. It actually felt like a real thing."

After hearing Ep. 10, Perrault reached out to Carrabis on LinkedIn. He showed up to the basement of Blackburn's mother's house for Ep. 11 alongside the wrestler, Thrillride, and the rest is history. What started as producer work since has turned into a co-host role after Blackburn, who is more known for his hockey fandom, left the baseball podcast.

The podcast had a dedicated group of fans from the get-go, and they only multiplied once Barstool noticed and took it under its umbrella. Thanks to that popularity, Barstool started selling "Section 10 Podcast" merchandise, which Perrault remembers seeing anywhere from random Dairy Queen's to the Fenway video board during Game 4 of the 2017 AL Division Series against the Houston Astros.

Then came 2018, which was a magical year for the Endicott duo and the local boys of summer, who won their fourth World Series since the turn of the century.

"It was the perfect combination of the Red Sox having the best season in their history wins-wise and us putting more resources into the show than we ever had," says Perrault. "By playoff time we were doing live shows at Cask 'n Flagon and Bill’s Bar and Lansdowne Pub. We were doing live shows all over Fenway and that’s insane to me."

Expect more of where that came from in 2019, as the duo's plans include having a guest on every show, doing more video-related work, and continuing to sell more merchandise.

"To go from Pete saying, 'Hey, let’s do a podcast together,' to doing these live shows in front of crowds that know the intro word for word, it’s really crazy to see how far it's grown," says Carrabis.

Just don’t ask them about duck boats—that’s a bit of a heated topic and a story for a later day.

While Perrault and Carrabis are both proud Endicott alumni, their paths to and from the nest drastically varied.

Perrault saw Endicott as the perfect traditional New England college for him when he entered as a sport management major and communication minor in 2008. He says, "The thing I love most about Endicott is that it was a small enough school where you felt you could get to know everyone, and it's also in the perfect location. It has that New England vibe. The campus is great and not far from home or Boston."

"At Endicott you really can do whatever you want and pick your path, especially with the internships. Without that, I don’t know if I would have had enough confidence to do the podcast."

Thanks to Endicott's nationally-recognized internship model, Perrault experienced the ins and outs of Boston sports media at WEEI as a freshman and at what's now called NBC Sports Boston for his semester-long senior internship. Right away as a freshman he was interacting with athletes such as Tedy Bruschi and Curt Schilling for the former WEEI night show, "Planet Mikey." And he really honed in on what he wanted to do with production assistant work for NBC Sports Boston, including how much time and effort goes into a 30-minute program—hint: it's a lot. He also interned for Boston College athletics during his sophomore year.

Perhaps the most consequential thing Perrault did at Endicott was his radio show, "EC Sports Nation." He says, “At Endicott you really can do whatever you want and pick your path, especially with the internships. That really helped me start my path by going down the show direction. Without that, I don’t know if I would have had enough confidence to do the podcast."

Perrault built real connections while interning at NBC Sports Boston, which led to some part-time production assistant work before he landed his first full-time job at rival NESN near the start of 2013. Following a two-year stint at NESN, Perrault moved on to Bleacher Report, where he’s worked for its app ever since.

Carrabis, meanwhile, took undergraduate night classes at Endicott’s Van Loan School beginning in 2011. He entered as a business major with credits already in hand thanks to Van Loan’s generous Prior Learning Assessment, which helps adult learners receive credit for their work and life experiences.

"I loved going to Endicott," recalls Carrabis. "When I went to Endicott it was a different experience where I felt valued. I felt like I was at a place where they believed in my educational ability. It was a great experience for me."

He knew what he wanted to do for a career, and he was surrounded by like-minded people who worked during the day and were dedicated students at night. They were all working toward something, which for Carrabis was a job in the sports media world.

He had had multiple stops along the way, whether it was his own Red Sox blog, SoxSpace, or his work for the New England Baseball Journal. But the rejections were plentiful, too. At one point, Carrabis sent his resume to 40 different media companies and only heard back from two, one of which was a flat-out rejection. He considered entering the military if things didn’t work out soon enough.

But things did work out, as he got the call from Barstool Sports to join the team part time before becoming a full-time employee with duties such as MLB/Red Sox writing and three different podcasts: "Starting 9," "From the Top Rope," and, yes, the "Section 10 Podcast." Carrabis also can be seen as an on-air personality for NBC Sports Boston and heard as an on-air contributor for 98.5 The Sports Hub.

To learn more about Endicott’s Van Loan School, student media experiential learning opportunities, the Schools of Sport Science & Fitness and Communications, and more, visit endicott.edu. And if you’re ever near Fenway’s section 10, take a second to take in the scene. You never know whom you might cross paths with. The same goes for a stroll through Endicott.