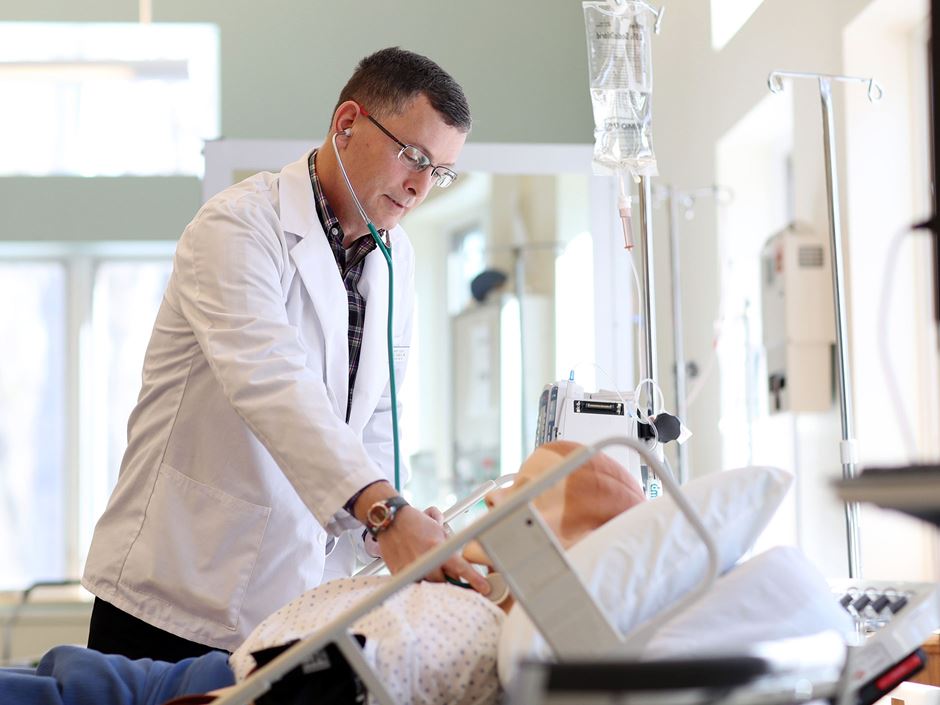 Michael Horvath graduated with a master’s degree from Endicott College.

It’s never too late to pursue your dreams, even if they include joining the rising number of men in nursing after you turn 52 years old. Just ask Endicott College graduate Michael Horvath.

While Horvath enjoyed his occupation as an MRI/X-Ray technician in New Hampshire, he always aspired to become a nurse. So, Horvath went back to college and obtained the necessary degrees en route to the Family Nurse Practitioner program at Endicott’s School of Nursing.

Horvath found the perfect partner in Endicott’s master’s program with its flexible, hybrid courses designed for working professionals, regardless of age.

“It’s never too late to go back to school and pursue your career in nursing,” Associate Director, Master’s Nurse Practitioner Program Jessica Ochs said. “I see a lot of young students right out of high school that know they want to go into nursing, but then I see on the other spectrum people who are in their 50s, even in their 60s who decide they want to go back and become a nurse. At any age, you will see people go into nursing and having pretty fulfilling careers.”

Horvath is well on his way to a fulfilling career, as he made the most of his Endicott College education experience by traveling abroad for medical trips in Papua New Guinea and Nepal and completing his internship at a local community health organization.

He also is among the ever-expanding number of men in nursing, which rose to 14.1 percent among those licensed between 2013 and 2015, according to the 2017 National Nursing Workforce Survey.

“I think this is a great career choice,” Horvath said. “There’s definitely a need. It’s a very challenging field. You’re never bored when you’re working – you’re busy. There’s a huge shortage of primary care in this country and it’s not getting better. The physicians are opting out of primary care because it’s not reimbursing at the rates specialties are. And that’s why we need the NPs to step in. And I think we need more male NPs because some people prefer a male in the role.”

Learn more about the Master of Science in Nursing options at Endicott College, including the Family Nurse Practitioner, Global Health, Nursing Educator, and Nursing Administration programs.