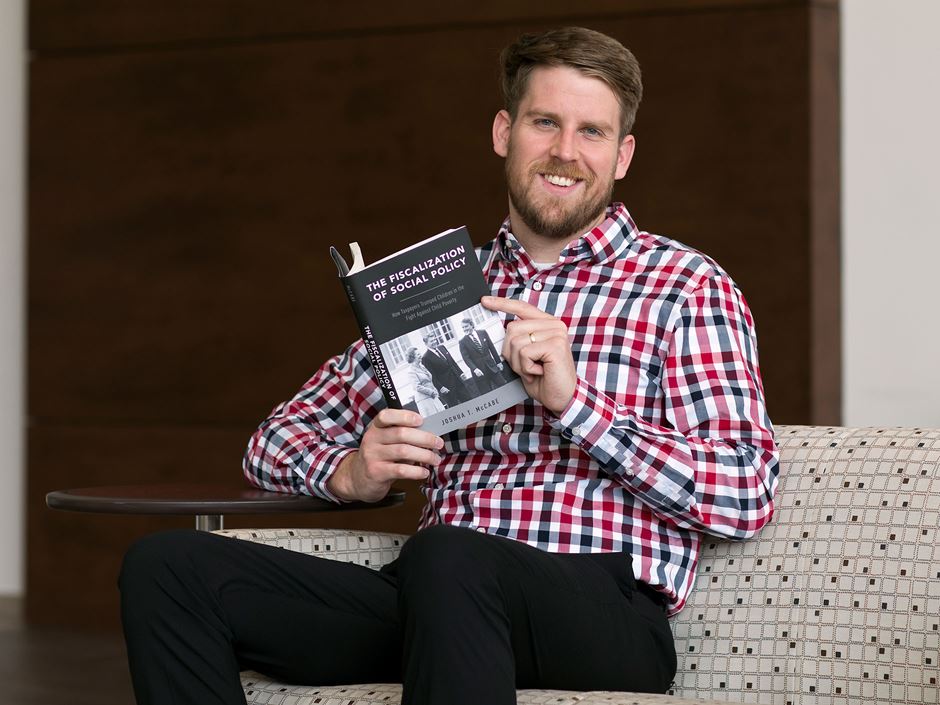 Joshua McCabe, assistant dean of social sciences, talks about his first book on child poverty and the social policy tied to it.

Joshua McCabe, assistant dean of social sciences, admits that when people start chatting about tax credits, most eyes glaze over. But, there’s more meat to his first book than tax credits. In his investigative narrative titled, The Fiscalization of Social Policy: How Taxpayers Trumped Children in the Fight Against Child Poverty, McCabe takes readers through a critical examination of social policy over the last seventy years.

Fueled by his fascination of the puzzles of American exceptionalism and their implications for public policy, McCabe draws comparisons between similar countries like the United Kingdom, the United States, and Canada to trace the lineage of the child tax credit as far back as the 1940’s. He shared, “One of the big themes of my work is this idea that things that happen 80 or even 100 years ago can constrain and have a huge impact on what policy is doing today.”

With his hands actively in public policy, McCabe brings real-world relevancy and an infectious drive for social change to all the courses he teaches. In an honors seminar titled The Social Change Workshop, students learned how small incremental decisions can create social impact over time. He hopes this message, a paramount theme within the book, will resonate with readers and students alike.

The Fiscalization of Social Policy: How Taxpayers Trumped Children in the Fight Against Child Poverty is currently available for pre-order on Amazon and will launch on June 18. We recently spoke to McCabe about the book. Here is what he had to say.

How would you describe what the book is about?

The book itself is about two types of tax credits that have become more popular in the last forty years: child tax credits and working, or earned, income tax credits. Most people’s eyes glaze over when you start talking about tax credits, but the book is about trying to explain child poverty across countries. Other countries do a much better job at dealing with child poverty than the United States. The question behind this book is, ‘Why is that the case?’

Where did this investigative work begin?

One of the broader themes in my research is this idea of American exceptionalism. In my work, I look for cases where the United States is just different than other countries for one reason or another. I usually study taxation, I’m a fiscal sociologist by training, so tax credits ended up being the subject of this book because our country was different and I had no idea why.

You explain this work as a puzzle. Can you tell us more about that?

What intrigues you the most about this specific idea?

How wrong the folk wisdom was about the reasons for the United States’ differences. Typically, we think the case was that in the United States we have this cultural bias against the poor, and we think they are unworthy in general for all sorts of historical reasons. But, that same political legacy that influenced the United States should have influenced Canada and the United Kingdom, but they were different. Once I started looking at other countries, I found that there’s some major implications for how we think about anti-poverty policy.

How do you hope readers will receive the book?

I hope they will see and understand how we got into our situation today. I hope by pinpointing what the actual obstacle is, people can start thinking about ways to get around it. Once you know exactly what is going on, you’re able to craft an effective strategy for policy change.

How do you hope policy makers will receive the book?

There has already been some interest. Policy makers recognize that many of the obstacles I talk about in the book are still there. In my policy proposals at the end of the book, I try to propose something that’s not going to end child poverty tomorrow, but it’s going to set us on the right path to do that years down the road. I hope that people see that you don’t need a big bang necessarily to get things done. Small incremental reforms putting us on the right path, can be just as helpful as a big new program.

Small changes having a big effect years later is a theme throughout your work. Tell us a little about that.

In my recent honors seminar, The Social Change Workshop, I tried to get my students to see how social and political change happens. Generally, you see these great man stories where someone comes in, they have the political will, and they get their way. But, I try to show my students these small little decisions that can have a huge effect over time. You don’t have to change the world in one big bang. If you can make small incremental reforms, you can put organizations, states, or the federal government, on the right path to where you think it should be.

Both start out with this idea that you don’t know anything and that learning and trying to figure it out is a process that takes time and that there are better and worse strategies for doing so. When I teach I try to start out with all these different puzzles of why some things look similar, or different, and why we have something, or don’t have it. And I show how social science can help you understand those questions or solve those puzzles. I do the same thing with my research. I want to use social science to understand the world. And I think that’s what Endicott students are interested in. They want to use education to change the world.

Want to know more about political science at Endicott? Contact Joshua McCabe at 978-232-2380 or jmccabe@endicott.edu.