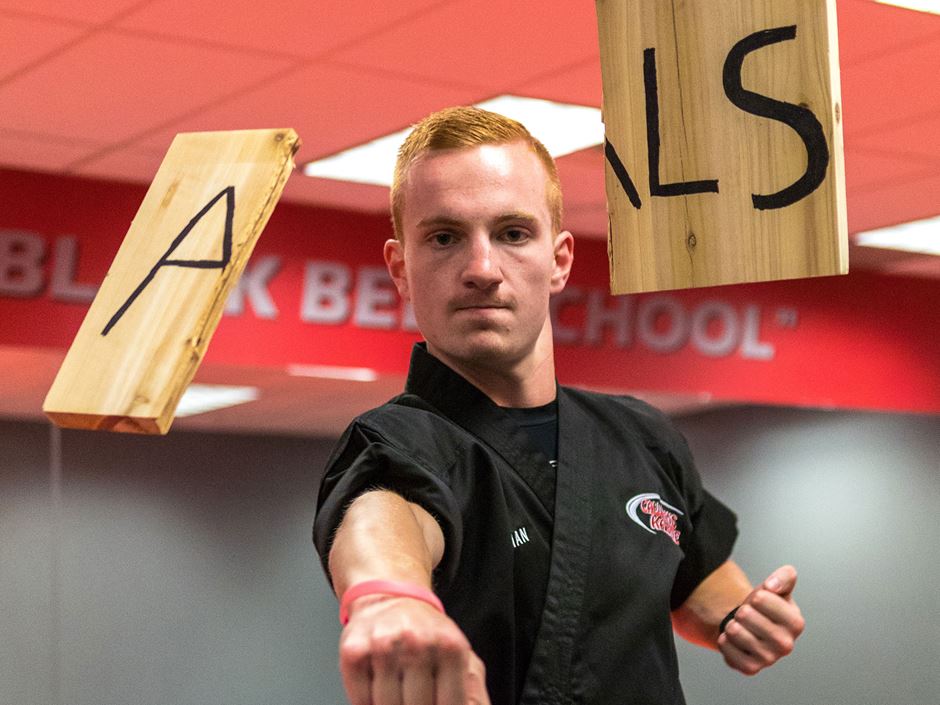 When Rob Ackerman’20 looks at you and says he’s been practicing martial arts for 17 years, you kind of just stare at him amazed. That’s because Ackerman is only 20. A budding martial artist by the time he was three, Ackerman is not one to waste any time.

Now a third-degree black belt, he’s also an instructor at Callahan’s Karate, the Bedford martial arts center that he’s been with from the very start. He said, “Being a teacher was not a choice for me, it was a calling.”

Ackerman said his time as karate instructor influenced his decision to pursue a degree in elementary education and moderate disabilities here at Endicott. “I was able to hone my skills working with children and teaching them in a martial arts sense. When I became an instructor that was what really sold the deal.”

For the past three summers, Ackerman has been merging his love of martial arts with his passion for giving back by running a Callahan’s Karate chapter of the Breaking Through ALS Challenge. The challenge is part of the larger Breaking Through ALS Challenge, which was started by the martial arts community to honor Kevin Thompson, a grand master in karate who is battling ALS.

Ackerman first found out about the challenge three years ago while at a karate tournament. The challenge’s mission, much like that of the Ice Bucket Challenge, is to raise awareness and help support a cure for ALS. The difference? Instead of soaking themselves with water, participants are asked to break through wooden boards.

“They challenged everyone in the ballroom at the tournament to join them in any way, encouraging friends to even participate by using just a piece of paper if that was all they had available,” said Ackerman, “I took that as a calling.”

Having lost a grandfather to ALS himself, Ackerman was all in. He said that everyone knows about this disease, “but you don’t understand how it affects you until you’re living it.”

Backed by his two instructors, in his hometown of Bedford, Ackerman began planning. The studio hosts theme weeks in the summer months, so they decided to align this fundraiser with board-breaking week. For at least a five-dollar donation, kids and community members could break boards.

Ackerman said it’s a perfect fit, “The kids break them and learn how to do it first and then they put it to a charity piece as well. They’re learning about martial arts and along the way learning about charity and how to help others.” He explained, “Seeing the generosity of all these people and seeing little kids counting out change and learning about donating money and how that helps out. It was rewarding to be able to give back in that way.”

With the support of the karate students, local businesses, and community members, Ackerman has been able to raise over $7,000 to support the ALS Association over the past three years. He says it’s all possible because of his responsive community, something he’s appreciative of both in Bedford and here at Endicott.

Ackerman is happy to see this same value for giving back in his Endicott community. Endicott’s annual Ice Bucket Challenge raised $2,000 for ALS research last October. This recurring event began on September 14, 2016, when the College dedicated the new Peter Frates Hall with a commemorative Ice Bucket Challenge. Peter Frates is the former Captain of the Boston College baseball team and professional baseball player in Europe, who was diagnosed with ALS in March of 2012 at the age of 27. Since his diagnosis, he and his family have taken an active role in raising awareness and funds for ALS research.

That first fundraiser saw 1,500 Endicott students and staff members lift blue and green buckets over their heads in a record-breaking show of support and recognition of the Frates family’s fundraising accomplishments.

Ackerman said, “It was tremendous, seeing that many people and local and national news taking an interest. It set the tone for the Endicott community and how they’re so, committed to helping each other. A whole dedication to a physical building, a huge mural, memorabilia, it reminds students that live there what this building means to them.”

Endicott will also begin hosting the North Shore Walk to Defeat ALS this year. The previous location was Beverly High School. Ackerman is part of the ALS Committee on campus led by Andrea Rhoades, assistant director of community service. This group is dedicated to helping organize the walk and lead fundraising opportunities on campus.

At Endicott, we like to say that Gulls give back.” In Ackerman’s case, Gulls give back, but giving back is “just what karate people do,” too, he said.

This year Rob will continue the Breaking Through ALS fundraiser for the fourth year in a row in addition to participating in the North Shore Walk to Defeat ALS. Visit his fundraising page to make your donation today. For more information on how to get involved with the ALS committee, contact Andrea Rhoades at 978-232-2108 or arhoades@endicott.edu.

You can also check out Ackerman’s video recap of last year’s Breaking Through ALS challenge. For updates on Callahan Karate’s fundraiser efforts to support a cure for ALS, follow @callahanskarate on Facebook and Instagram.