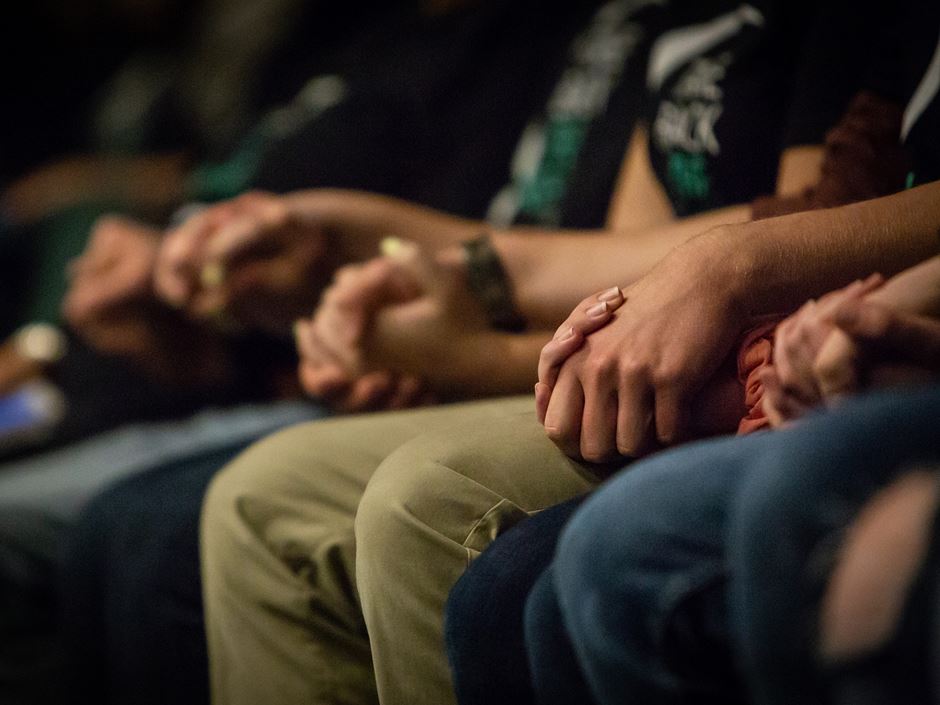 160 students stood up against sexual assault and violence at this year's Take Back the Night event.

A rainy forecast didn’t dampen the determination of our students who participated in Endicott's fourth annual Take Back the Night walk. The walk began as a feminist movement around reclaiming the night and was the earliest world-wide protest against sexual violence in the 70s. The walk’s mission is simple: to end sexual assault, domestic violence, dating violence, sexual abuse, and all other forms of sexual violence.

A group of 160 participants stood together last night to end sexual violence in all forms.They filed two-by-two through campus sporting Take Back the Night tee shirts, rain ponchos, and umbrellas.

Eren Santana-Bykofsky ’18 recounted the emotion of the event, “From the stories told, the hugs embraced, and the tears shed, it makes for an impactful night and empowering reason to keep fighting for a better tomorrow.”

Take Back the Night puts into perspective what it means to be a survivor. It reminds us survivors that we aren't alone, and the night is, for me at least, a beautiful evolution from mourning what we've lost as victims, to championing our lives moving forward as survivors,” said alumna Julianne Ayers ’17 who has been a three-year participant.

The walk ended at the Wax Academic Center where a ceremony took place. A performance by ECHO started things off followed by a word from a courageous group of survivors. Harmonelle put on a stunning performance, and Gail Cantor, Endicott’s Chaplain, spoke to the group.

The ceremony closed with a performance by alumna Julianne Ayers. “Even as an alumna, I feel a strong sense of pride for the support system at Endicott, and its ability to amplify the voices of sexual assault survivors and allies. I'd take a plane across the world to participate in this event—that's how fond I am of this support system,” said Ayers.

The Endicott walk was just one of a string of Take Back the Night walks across the nation. Santana-Bykofsky said it’s important to remember the reach and impact these events can have, “Any participation in any way can make a difference. You just need to remember to act locally, but to think globally.”

Ayers shared similar sentiment. It’s important to continue to push for change said Ayers, “The more we survivors wear our teal ribbons (a symbol of Sexual Assault Awareness Month) like capes, the closer we get to a time when no one has to say #MeToo."

This walk is part of the College’s bystander intervention campaign, I See, I Speak, I Pledge, which spreads the message that individual students have the power to prevent high risk behavior and harm. The campaign’s message of helping one another has infused itself into the Endicott culture and, last spring, it was what earned the College The Prevention Excellence Award from the Campus Prevention Network (CPN) Summit.