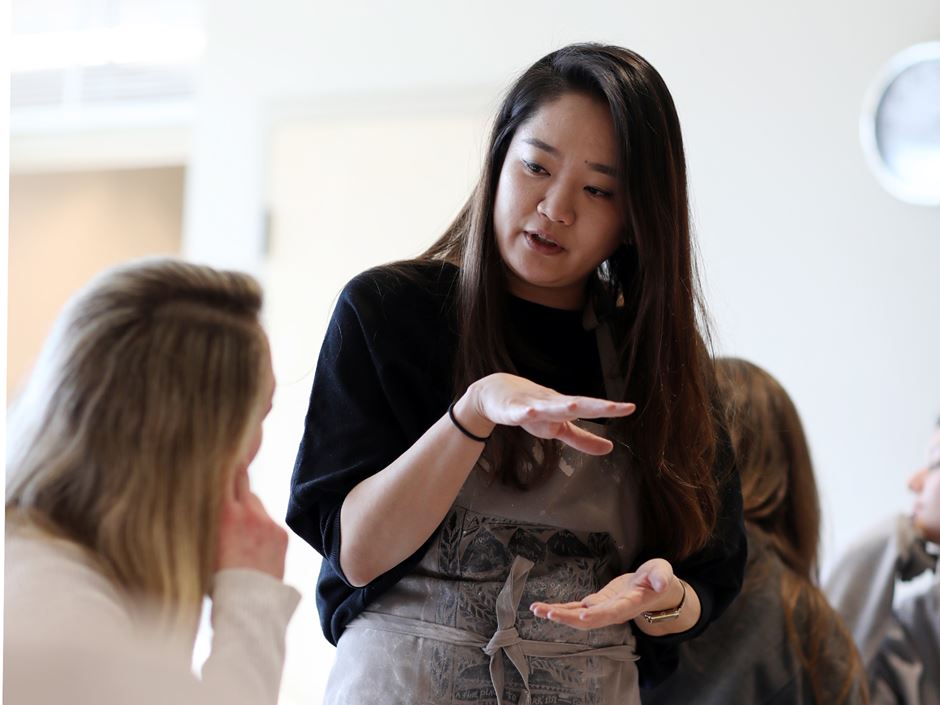 In Kyungmin Park’s ceramics courses her student’s never have to ask, what does being an artist look like? That’s because Park is a living example of what a career as an artist truly means. One of her favorite aspects of teaching is being able to show her students—firsthand—the dedication it takes to be a successful and active artist engaged in the industry.

As a little girl, Park hoped to be the creator of the world’s next Wallace and Gromit. Her mind filled with dreams of making it big in the world of clay animation and working for names like Pixar and Disney. It was the creation of these figures, of these characters, that held her fascination when she was an art school student at her high school in Seoul, South Korea.

Now, an assistant professor of ceramics courses at Endicott, she reflects on her journey from little girl with big dreams growing up in Seoul to successful sculptor and teacher in America. Kyungmin’s early art education was primarily skill-based. She grew up learning about art as a squared and structured system. Inspired by figurative work that told narratives, she craved to find a middle spot between these two approaches.

That’s when she traveled to the United States in 2006 and pursued a ceramics degree at Alfred University. “It’s basically from dirt to a creative art. That was really fascinating to me,” she said.

With her entire family still living in South Korea, Park said that her greatest accomplishment has been her decision to leave her country when she was twenty with two giant suitcases and an open mind for adventure.

“As an artist I don’t want to make work in my basement and not share it with other people.” That’s ultimately why she chose to teach. Revealing the time, effort, and skill it takes to make a piece of art is the most important part of teaching for Park. She said her students leave her course with a greater appreciation for art, artistry, and craftsmanship.

During the teaching months, Park carves time out to pursue her artist life. She said, “After dinner, I have to put myself into the studio. She stressed, “Being active is very important. I would rather show my students how I deal with it and how you must be dedicated and passionate, than to lecture them on the practice. I want to set a real example for them.”

“Normally when I introduce myself to people I say, ‘I’m an artist.’ The first question they ask me is, ‘“How do you make a living?’” Park explained, "It's hard to foresee exactly how your career will develop. You need to have some idea of what drives you and where you're going. Same as other careers. Being an artist is very time consuming and you have to be dedicated and I am sure my students notice that."

She stressed, “It’s a hard job, but it’s necessary. Art reflects culture.” She said that when she’s in the studio, she asks herself things like, What’s worth it? What’s meaningful? In our world’s troubling times, she asks herself, Is it really meaningful to make art in this chaos? She said, “I have to question it, but, the answer is yes. That’s the important role of an artist.”

“Making art and questioning what it means is what every artist is trying to do,” she said. Park continues to expand her student’s understanding of art and hopes to cultivate more artists who will dedicate their lives to such hard, but important, work.

Here’s a snapshot of Kyungmin Park’s 2018 exhibitions, workshops, and events:

Lacoste Gallery, Through the Eyes of a Collector