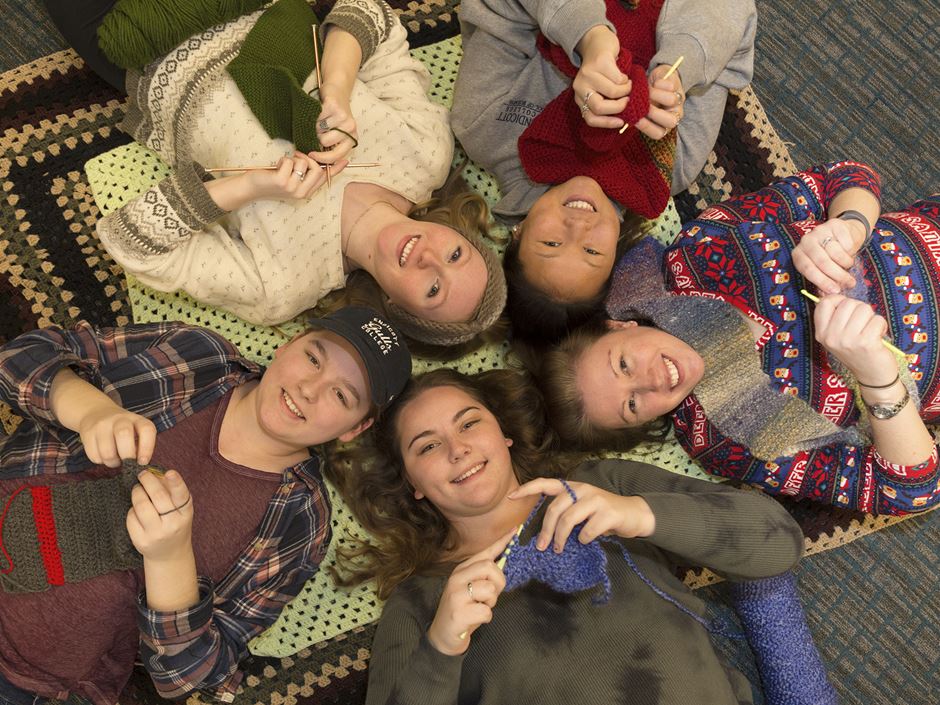 Kennedy Glidden, Lindsay Laflamme, Anna McAlister, Caili Inman, and Ashley Palmer of the Charity Craft Club craft for a cause. The club wraps up its most recent donation to local homeless services organization.

What started as a hobby for Associate Professor, Anna McAlister, Ph.D., soon evolved into a shared passion to help.

McAlister found, stitch by tiny stitch, that her knitting hobby was more than just something fun to do. It was also largely therapeutic. After seeing several studies published on the stress-relieving benefits of knitting, she thought, why not introduce this to a group of individuals who know stress all too well—students.

Charity Craft Club marries the stress-relieving benefits of knitting with the charitable aspect of giving back. Members receive donated materials from McAlister’s neighbors and a partnering senior center in Wakefield, Mass., who donate all their leftover yarn from old projects to the group. Students recycle these leftovers and create something totally new to benefit local charities.

The students choose to either knit or crochet, the only requirement is that the final product must keep someone warm. Past fundraisers of the club have involved selling crocheted shamrocks for St. Patrick’s Day and knit hearts for Valentine’s Day to raise money for PAWS, an animal rescue group. This year the club took to making warm articles of clothing and donated them to Lifebridge, a homeless services organization with a mission to end the crisis of homelessness.

Vice President of the club, Lindsay Laflamme ’20, says, “It really feels great to be giving back to people who need warm clothing items and blankets. Donating these items gives me a sense of pride that the work our club does has a positive impact on the lives of others.”

McAlister, the faculty advisor for the club, reports that the club’s final donation to Lifebridge on Dec. 16 included three blankets, one hat, 17 scarves, and eight head bands to keep those in need warm throughout the season.

Kennedy Glidden ’19, club president, says she already was a crafter, so it’s been great having this group come together to craft to make an impact. She says, “I joined Charity Craft Club the first year it was offered because I enjoyed crafting already and wanted to donate to a good cause. It was appealing that what I was already doing could be put to good use and help people who genuinely need warm articles of clothing.”

Club member, Caili Inman ’18, loved the charity aspect to the club because, like a baker who doesn’t like sweets, she’s a knitter who doesn’t wear what she knits. “I like to make stuff, but I don't wear what I make,” she says. For her, it’s all about mastering something new and then finding her next project, “like reading a new pattern or making something I never made before.” The plus is that what she produces can then be used to help.

As for the calming aspect of crafting? Club members say this is true. “Your mind focuses on the craft and there isn't much room for any built up anger or stress to show,” says Glidden, “It’s a really good way to destress each week, especially in a group since you can talk with those around you.”

Join the club’s Facebook group and learn more about how you can join by contacting Charity Craft Club faculty advisor, Anna McAlister at amcalister@endicott.edu.