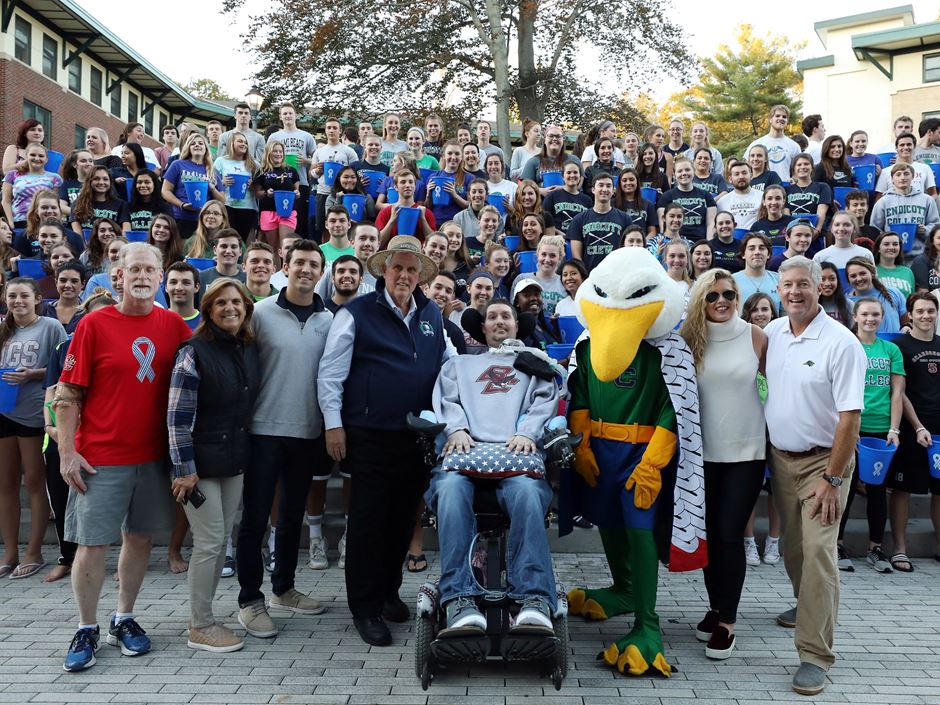 The Endicott College community came together Wednesday to raise $2,000 for ALS research.


In what’s set to become an annual tradition, Endicott welcomed students to participate in an Ice Bucket Challenge, which raises money for ALS (commonly known as Lou Gehrig’s Disease) research, outside Peter Frates Hall. The event was organized at the request of Endicott students, who were eager to take part in ALS fundraising and show support to the Frates family.

The College donated $2 for each of the 500 students participating, equaling $1,000, and Endicott College President Dr. Richard Wylie matched it for a total of $2,000.

The Ice Bucket Challenge originally became a worldwide phenomenon in 2014 thanks in part to Beverly native Pete Frates, who was diagnosed with ALS in 2012. Frates’ parents, Nancy and John Frates, both were on hand at the challenge.

“We appreciate you being here,” Nancy Frates told the Endicott community Wednesday. “We want you to know what it means, we want you to know how much it means to our family, how much it means to the ALS community, that you’re all standing up here for our family and for ALS to say we are going to keep striking out ALS, and we’re going to keep doing this until we get rid of this disease.”

In addition to the annual Ice Bucket Challenge, the College also will begin hosting the North Shore Walk to Defeat ALS in 2018, as Endicott College President Dr. Richard E. Wylie announced at the 2017 Walk this past Saturday. The previous location was Beverly High School.

On September 14, 2016, the College dedicated the new Peter Frates Hall with a commemorative Ice Bucket Challenge, which saw 1,500 Endicott students and staff members lift blue and green buckets over their heads in a record-breaking show of support and recognition of the Frates family’s fundraising accomplishments.

“It is my hope that Endicott will continue to be part of the Frates family support system as they battle Pete’s illness and take on amazing fundraising challenges,” said Dr. Wylie. “New breakthroughs in ALS are on the horizon, but we must keep steady in our efforts to fund further research. Our students are so excited to be a part of this event to help raise money to search for treatments and a cure for ALS.”